E-commerce is increasingly useful, and nice to have as a service, which we use every day, but is it profitable?  There were two e-commerce deal announcements in Nairobi today that happened almost simultaneously.

First up was Lipa Later, the “buy now pay later” fintech company confirming that it had acquired SkyGarden, a popular site for purchasing goods from abroad. SkyGarden had recently announced they were closing shop, as they were running out of cash – and this S.O.S. announcement appears to have worked as a last-minute rescue deal with  Lipa Later came just days after. Lipa Later has been signing up partners and SME’s enabling them to sell products like laptops, phones, and insurance to customers on credit. The two companies had worked together and with this familiarity, the deal for a 100% takeover is complete and SkyGarden, with its staff already absorbed, will remain, and run independently. SkyGarden had invested $6 million to run in Kenya but seems to have faced challenges with the logistics of e-commerce. Lipa Later will maintain the “same day” delivery attraction of SkyGarden whose customers will now be able to pay using Lipa Later instalments in Kenya and later in Rwanda, Uganda and Nigeria.

Then there was the launch of Kapu Africa, from former executives of Jumia and other technology leaders.

Kapu Africa is focused on bringing down the cost of weekly groceries by sourcing from farms and food manufacturers for free next-day delivery to a Kapu agent collection centre such as hair salons or other homes near the buyer’s house. Orders are to be placed on WhatsApp by 9 PM  with even lower prices for group purchases. Kapu says it has 1,500 centers in areas like Eastlands, South B, Kawangware and Kasarani and plans to be all across Nairobi by March 2023.

Safaricom for juniors: E-commerce buyers tend to be over-18 as payments require that a card and M-Pesa (mobile money) be used, but Safaricom has gone beyond that hurdle in launching M-Pesa Go, to tap kids between the age of 10-17, who have access to mobile phones, and enable them to buy from stores and pay for things like taxi rides and online meals, with supervision from their parents.

Contactless SME payments: Fast, easy payments, preferably without any physical contact or exchange, are a holy grail in e-commerce especially for fast-paced urban lives and for in-person shopping during Covid-19. Now Pesapal, which has quietly locked up key territories and partnerships in the SME payments space in Kenya enabling them to easily accept all forms of e-commerce payment from customers, whether card or mobile money, has launched a new tap service.

Food distribution: Logistics is a big part of e-commerce and last week Twiga Foods, one of the best-funded organizations in the space, had Kenya’s President William Ruto launch a logistics hub at Tatu City in Ruiru, near Nairobi. The company has a Twiga Soko Yetu platform and 200,000 square-foot automated warehouse and distribution centre that can handle 8 million kilos a day of fresh produce, food and retail commodities for Twiga to distribute to its 140,000 customers across Kenya and Uganda.

edit Now Jumia has closed its offices in Dubai and shifted its senior staff to work in Côte d’Ivoire, Kenya and Morocco, in a cost-cutting move. Via Tech Trends KE.

Previous insights on e-commerce in Kenya from Jumia and Chap Chap Go. 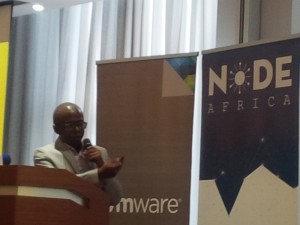 Today a unique partnership was announced between Rupu and EatOut.

EatOut is a very useful sites that offers restaurant & cuisine information, reviews, and even enables bookings, keeping their clients in tune with what’s happening in the restaurant scene, and up to date on specials, and events. They have signed up 150 restaurants in Nairobi, Mombasa Malindi Diani, and soon Zanzibar.

Rupu who launched in December 2010, offer discounts on their site of between 50% – 90% through the concept of group buying – and found that their customers were asking for restaurant deals. The benefits to consumers are the sharp price discounts (which Kenyans love – see bazaars, Gikomba and the buy-one-get-one-free at Pizza Inn & Steers); while to business owners, they benefit from free marketing & publicity, introduction of new customers who are committed to buying, minimum guarantee of sales if a deal goes live and instant cash which is split 50/50 between the business and Rupu.

The first deal of the week under the partnership is with the new Sankara Hotel which wants to show its not as pricey as its current image.

Booking can be done through the restaurant or EatOut – and Rupu have trained & equipped business owners in authentication and redemption of vouchers. Transactions are completed online or by mobile phone, and take a few seconds if you have enough money in your M-Pesa or Zap account, with a booking interface is via pesapal. Credit cards, whose use is not as prevalent, will be introduced later this year.

A talk on venture capital (VC) was given by Vincent Kouwenhoven and Brian Hirman of the eVA (eVentures Africa Fund BV) at the iHub in Nairobi. They both have about 15 years experience in VC and enumerated the criteria the fund uses for investments including that target companies in Africa should have profitable track records (not start-up’s) to qualify for VC investments of between 25,000 and 250,000 Euros (~Kshs 2.5 million to Kshs 25 million). 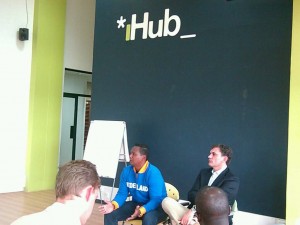 The fund was launched in January 2010, and in the ½ year they have invested in 5-6 companies. The founders are seasoned travelers in Africa and their interest was piqued by observations they made over the last three years including;
1. Chinese investment interest in Ghana and Kenya
2. Arrival of fibre optic cables
3. More African returnees returning from the Diaspora who were setting up their own companies (it’s a good sign). They have been exposed to Kenya for many years and sense that entreprenual spirit in Nairobi is very good as are competence levels in high technology sectors.

– All their investment are active in the digital scene – whether mobile, internet, communication platforms – and include a leading internet company in Ghana, while in Kenya, they have Jumuika, Ratio Magazine, and the latest deal signed today is for an investment in Verviant (w/ Liko Agosta better known for Pesapal)

– They invest growth funding in companies and try and cultivate a healthy portfolio, unlike other VC’s who make several weak investments in the hope that one or two will payoff and offset the failures. Their investment clearly spells out the use of proceeds/funds which can vary, but ideally should not be for increased salaries or other debt repayment (unless to retire expensive debt). They also mentioned that their investment criteria is a guide, not cast in stone (e.g. Jumuika was a startup)

– They get involved in the operations of the company; whether marketing, technology, financial, entrepreneurship, HR policies. They act as a sounding board and advise owners (use skype a lot) on how to scale up e.g. when they get traction, how to set up customer care capacity

– They seek out committed entrepreneurs – not part timers, or people with one good idea they have not developed, or people with a dozen ideas (not focused). They want to invest in people with the gut and belief to start a business and are willing to eat bread & water to hack it put (not one who relies luck) – and who also enjoy what they are doing. Other “no no’s” include people who ask for too much money that dilutes their equity (EVA want founders to retain at least 51% at all timea), or which enables them to run the business without risk for two years (i.e. with the VC’s funding)

– On exit strategy their preferred rout is a buyout of the company within 3 to 7 years by multi-national or larger company. In cases where an investor may not be ready to sell, the VC can sell their stake to another VC.