Historically, golf has been considered to be a costly sport in Kenya with difficulty in accessing equipment kits and membership clubs to play at. But now golf is enjoying increased corporate attention and bank sponsorships in the post-covid period. Some of these initiatives had begun in the period before the shutdowns in 2020, but the increased need for individuals to exercise in open spaces boosted more interest in hiking, cycling, jogging, and golfing. Golf clubs were previously seen to be losing touch with young people, and many of the new initiatives are designed to turn this around.

Some ongoing corporate golf partnerships are:

Kenya’s third-largest bank group Co-operative (Co-Op), which is listed on the Nairobi Securities Exchange, has entered discussions to acquire 100% of Jamii Bora bank.

Jamii Bora’s assets have been on the decline and it is ranked number 36 by asset size with about Kshs 5 billion of deposits and Kshs 8 billion of loans at last reporting. Three years ago it was to raise $12 million from Equator Capital Partners and Progression Capital Africa, and early last year Jamii Bora was linked to being acquired by CBA, but that appears to have been shelved after CBA merged with NIC.

It is owned by Asterisk Holdings, Equator Capital Partners, Jamii Bora Scandinavia, Catalyst JBB Holdings, Nordic Micro Cap Investments (PUBL-AB), has 650 other shareholders and the CEO owns 1% as the largest individual shareholder of the bank.

Jamii Bora had made a few unfortunate forays in the corporate space, and became the largest shareholder of a restructured Uchumi, with about 15% ownership. It also got swept into the Kenya Airways debt for equity swap.

Jamii Bora has about 350,000 customers and with 17 branches. It has a strategic niche with micro, small, and medium enterprises offering LPO financing, lease finance and trade finance services as well as training and meeting space to business owners at its headquarters in Kilimani.

EDIT Aug 7: The Central Bank of Kenya approved the takeover of 90% of the capital of Jamii Bora Bank by Co-operative Bank of Kenya, effective August 21, 2020.

EDIT Aug 25: Co-operative Bank announced the completion of its takeover of Jamii Bora which will now operate as Kingdom Bank. The Kshs 1 billion deal approved by the CMA and Competition Authority involved the transfer of 224.1 million Class A shares of Co-Op Bank to acquire 90% of Jamii.

Managers and employees are often given a chance to become part owners in the banks. This ‘aligns their interests’ with the institutions and gives them an added incentive to help the institutions do better as it individually rewards them for the good performance. The incentives are usually facilitated through employee share option schemes (ESOP’s) which convey some tax benefits and discounted buying prices. Typically, in conventional ESOP’s,  there a general pool for all employees and another for senior managers.

The method of calculation and award of these benefits is done in secrecy, usually by board committees. This is to ensure the privacy of employees and security of their families, but one outcome is that any revelation of these perks sparks a lot of interest.  In fact, you sometimes find a higher level of disclosure of compensation practices at listed banks in Uganda and Rwanda, than you do with Kenyan ones. 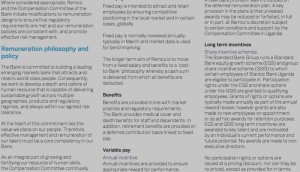 CBA: Shareholders include a ESOP who own 2.5%.

Chase Bank: Employees of the bank own  4.3% of Chase through an ESOP. Elsewhere a bonus to the former chairman was one of the deals that the auditors queried in 2015.

Cooperative Bank: Stories about shares to bank management and directors first surfaced in 2008, ahead of the IPO in which bank staff got 9% of the shares. and has been on twitter this year. The company’s accounts show that the CEO owns 2% and the bank links the story to a smear by a former CEO who has an ongoing tax case with the bank.

Equity Bank: CEO owns 4%, while an employee ESOP owns about 3%.

Jamii Bora:  The CEO own 1% and is also an investor in the largest shareholder of the company.

Family Bank: In 2011, shareholders voted in an ESOP for managers and a transfer of 1 % transfer of shares of the (then-new CEO , which he purchased at a discount as part of his employment package.

Housing Finance: Has has an ESOP since 2006 that’s open to  all employees: Eligible employees pay for the units by cash at a price determined by Trustees either in full or by instalments until price is paid in full. The Unit holder is not allowed to sell, transfer or otherwise dispose of Units registered in his name to another Unit holder or to any third-party whatsoever.

KCB:  When KCB CEO Joshua Oigara declared his wealth (assets of Kshs 350 million comprising land, buildings, motor vehicle, cash bank balances and shares) and salary (with allowances that totaled  Kshs 4.9 Million a month),  last year his statement added that  “..My public declaration is driven by the need for us as private sector players to initiate greater transparency. Kenya is bleeding from corruption mainly driven by secrecy in organizational operations..” 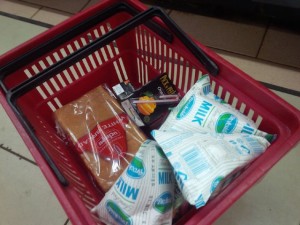 A peek at the microfinance institutions sector (MFI) the cousin to the banking sector. During the Africa -Middle East Regional micro-credit summit held in Nairobi in April 2010, several participants also exhibited their MFI products and services

Services to MFI
– AMFI the association of microfinance institutions – Kenya offers capacity building, industry lobbying, performance monitoring and linkages to members. On a larger international scale, you have the UN! Doing this through the UN Advisors Group
– Bridging the branchless banking gap by CGAP
– Branchless banking equipment includes devices from ingenico and craft silicon and a micro-payment (mobile and online) from Impala to deliver low cost financial and transactional services

– MFI product advisory services from MicroSave as well as research and capacity building in micro saving and product delivery techniques – they have advised Equity Bank, Family bank and consulted on MPesa formulation.
– Hedging for MFI’s to eliminate currency risk from MFX Solutions
– MFI support from the Grameen Foundation has funded $16 million to MFI’s in Ethiopia, Kenya, Ghana and Nigeria and supported Applab partnership with Google) for information to rural Uganda farmers and Ghana to help new expectant and new-born mothers access medical care via mobile phone.
– Management services, and technical advisory to MFI’s from ACCION
– Private finance to MFI’s from Oiko Credit examples of which was Kshs. 71 million to Githunguri Dairy Farmers Society as well as to Uganda Women Finance Trusts, Nyeri Tea Growers, Daystar University (partially supported by Grameen). Also, another from Unitus which raises funds & grants, advises & arranges capital to grow innovative MFI’s 23 in 9 countries worldwide including Jamii Bora Kenya and SKS India.
– Loans in local currency in Africa from BlueOrchard to established MFI’s (minimum $1 million total assets, and at least 2 years old)
– MFI lending cost comparison (APR based) by the MFTransparency (report covering 90% of Kenyan MFI’s will be on their site in a few weeks)
– Software to administer MFI loans from Loan Performer a highly rated package.
– Recycle your cell phone into MFI loans with Chiapas

Unique products
– Matatu loan insurance accessible to members of the Jitegemea credit scheme
– Micro health (Bima Ya Jamii), home beautification and other loans from SMEP and their loans are repayable by MPesa
– Medical health (Faulu Afya) plans from Faulu Kenya which can provide inpatient cover up to 1 million (~$13,000) as well as from AAR Credit to pay for AAR Health packages in low installments
– Micro-insurance from Microensure. A similar product on livestock insurance was featured in the Economist recently
– Goat meat and poultry boiler accessible to Yehu MFI (operates at Kenya Coast
Livestock trading, micro health, business acquisition and other loans from KADET – The Kenya Agency for the Development of Enterprise & Technology, which is an affiliate of World Vision.
– The world famous Money-maker water pumps from Kickstart helping small-scale farmers out of poverty
– Venture capital (equity partnership loans up to 150 million or ~$2 million) as well as contract financing and industrial finance from Fusion Capital targeted at SME’s (not MFI’s)
– Various loans for women entrepreneurs from the PAWDEP – the Pamoja Women Development Program
Start-up loans from Elmseed ($2,000 first year, 10% simple interest) small loans, big futures, and Kenya government Women Enterprise Fund and Youth Enterprise Development Fund borrowing is secured by group collateral) 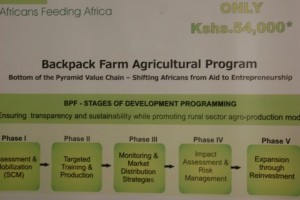 Local Banks
– Citi whose Citi Foundation has lent $80 million to MFI’s over the last 11 years in 88 countries in areas like colleges and neighborhood revitalization.
– Equity bank with Vijana business loans targeted at members of youth groups as well as fish loans uvuvi biashara to finance nets, cooling equipment, boats etc.
– KCB with bankika a business package targeted at young entrepreneurs

New Banks
– Jamii Bora Bank which bought a small bank in a reverse merger claims that with its over 200,000 members is the largest MFI in Kenya.
– KWFT – the Kenya Women Finance Trust Deposit that was licensed this week deposit-taking MFI by the Central Bank of Kenya offers startup funding and LPG (gas) among many other loans. KWFT which claims over 334,000 members slots in as a mid-tier bank