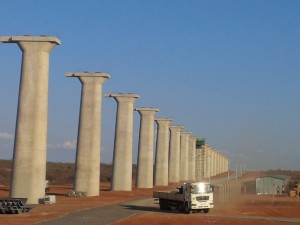 There are about 20 roads envisioned for Nairobi, known as Nairobi missing links that had been planned as far back as independence and in subsequent development plans for the City. These were designed to open up neighborhoods to development and ease transportations problems – but were never built.

These plans have remained on city maps and while land developers have generally avoided constructing on these set-aside areas, there has probably been encroachment on in the more densely populated areas, as indicated by the recent failure of fire-fighting efforts. In some cases the city council has licensed businesses to operate there but only as temporary occupants.

The Japanese International Cooperation Agency (JICA) is undertaking a study on the development of missing links “3 6 & 7” which are located on the western side of Nairobi to be an experiment for the rest of the City’s roads – and they will the projects for financing by the Government of Japan.

If approved, construction of the following roads (with bridges, pedestrian & cycle lanes) should begin in 2007:

That’s what friends are for
I called in a huge favour last week and was able to snap up some tickets on a Coast bus to Mombasa, two days before Christmas. Most bus companies are fully booked this time of year, and the seats I got were on one of the extra buses added to meet the holiday demand. On this trip, I took a bus ride down and drove back in a small car. Another option I considered was to make both legs of the journey by overnight train.

Shopping jam
Because of the last-minute shoppers, and increased number of buses & matatus waiting to travel, there was huge traffic jam in the city on Friday. As a result, it took over an hour to clear the city limits and we were passing JKIA (Nairobi airport) more than 1 ½ hours later, despite having left on time at exactly 10:30.
Good road

The 500 kilometre (300 mile) road to Mombasa is one of the smoothest and most pleasant roads to drive on – for at least 200 miles or (2/3) of the journey. There are long stretches of road that never seem to end, meandering through flat, mostly dry, low hills and plains. It’s been dry in most of Kenya for several months now, but one goes though parts of Ukambani where it has not rained for years and the drive is made beautiful in that you don’t have to stop here, and are only passing through at high-speed. The road is mostly new from Sultan Hamud onwards, and even though there are some diversions where the road is still being constructed, they are well paved and you don’t lose any time.

All those people who nurse their Subaru’s, BMW’s, and other high performance cars thought Nairobi’s daily traffic jams should consider giving their cars a treat and drive down to Voi, or even on to Mombasa. The roads are so good that one can easily get carried away, until they look at the speedometer and realise how fast they are driving on the many long stretches of road that never seem to end. But, if you have an older, troublesome or weak car, the drive can be frustrating because it appears you’ll never reach your destination, and keep getting demoralized as you’ve overtaken by faster cars, buses and even trucks.

Speaking of trucks they really hit top speed on the highway with trailer trucks cruising at 80 – 90 km/h. When one drive you (going in the opposite direction) the turbulence it produces can blow other light vehicles (with inexperienced drivers) off the road.

There are supposed to be some speed traps on the highway, but I did not encounter any. Police on this road are more concerned with ending a series of attacks by highway robbers who have been operating on the road for the last two years.

Near Mombasa is short stretch of road that is reason enough not to drive to Mombasa. The road one of the worst you will find in Kenya, and is so unbelievably bad, it’s a national shame. It takes about 1 – 2 hours to cover the 20-kilometre section between Mariakani and Miritini on the outskirts of Mombasa. It doesn’t matter if you’re driving a land cruiser or humvee – high speed will cause a puncture or you to leave some vehicle parts behind. Power steering is a must, as you must literally dance your car around a huge endless sea of potholes, which are either huge craters or sharp-edged ditches.

Several prominent companies located in the area such as Mabati have complained and threatened to move their businesses elsewhere if the road is not improved – but to no avail. Mombasa residents say the road is actually better than in years past, and have faith that repairs will be done in 2006. You won’t believe how bad it is until you try it, but you should only attempt to drive through in the daytime. A nighttime drive though will expose you to severe vehicle damage and a possible robbery attempt.

For security purposes I was told that if you get a puncture in this area, or other parts of the highway (and especially at Night), it is advisable to block the whole road with your vehicle. This forces other vehicles to stop and support you while you carry out you repair your puncture. People who pull to the roadside are often attacked.

Nearer Nairobi (between the Athi River and Machakos turnoffs) the road is also slowly deteriorating as no maintenance is being done.

Banking
Pesa Point have installed an ATM at Mtito Andei (halfway point of journey) in what is arguably the town’s busiest location – the Caltex petrol station where Coast bus make their rest stops. KCB also has some branches along the way, but most Banks only have branches in Mombasa

Wildlife
I saw a giraffe near Sultan Hamud, baboons, and three herds of Zebra who appear to have permanently settled on the roadside just after Mtito Andei. Also saw two elephants approaching the road near Manyani, and I almost ran over a four-foot monitor lizard that wanted to cross the road near Mariakani. Oh, and some cows grazing at Nyayo Stadium in Nairobi under the close watch of Masai herdsmen.

Summary
Overall it’s a good drive, whether going to or from Mombasa but only if you leave early enough to tackle the bad roads (at either end) with plenty of time and daylight left – it’s also advisable to go in a convoy of vehicles. Next time I go to Coast, I will try to take the train, as it is the only mode I have not recently used. The Kenya Airways flights take one hour and are unremarkable except for a clear view of the disappearing snow atop Mt. Kilimanjaro.