Last week saw the release of a report from the Presidential Taskforce on the Building Bridges Initiative (BBI), that was the result of a March 2018 ‘handshake’ between President Uhuru Kenyatta and former Prime Minister Raila Odinga who had led different parties into the 2017 Kenya general elections.

The document is sub-titled Building Bridges to a United Kenya: from a nation of blood ties to a nation of ideals and its authors claim to have incorporated the views of about 7,000 Kenyans from all 47 counties.

One of the summarized findings was that elections are too divisive – and the country’s economy gets three good years that are interrupted by two-year blocks of intense electioneering campaigns.

Anyway, on to an alphabetical look at some of the Building Bridges Initiative (BBI) Report clauses.

Anti-Money Laundering: A bank involved in corrupt transactions should be made to repay all the money laundered through it, with interest.

Audits: Devolve the Office of the Auditor-General to the counties. Also, projects initiated in the final year of an electoral cycle should receive extra scrutiny from the Controller of Budget and all oversight authorities.

CCTV: Link private CCTV of hotels, shopping centres, and other highly trafficked sites to the National Police Service to deter terrorism and crime.

Cyclists: Every new road in an urban area should be legally required to also have a sidewalk for pedestrians and specified lanes for cyclists, with clear signage.

Doing Business Rankings (not the World Bank ones): Develop and launch a measure of ease of doing business for small Kenyan businesses and not just foreign investors. This should be a comparative assessment published annually by the Kenya National Bureau of Statistics and broken down by counties, cities, and towns.

(Fighting) Corruption: One of the summarized findings was a need to reverse the Ndegwa Commission and ban all public officers from doing business with the government. Another is that no procurement officer should be at a post for more than two years.

e-Government: Make Kenya a 100% e-services nation by digitizing all government services, processes, payment systems, and record-keeping. This should include the ability to offer Kenyans digital identities, e-health records and Kenyans should be able to vote digitally.

(Attitude to) Free Money: When money is known as ‘pesa ya serikali’ (Government money), it is something to plunder not respect; indeed, people who try to save public money are dismissed and even rebuked.

(Use of) Government Services: dubbed “skin in the game of leadership” – all ministers and county executives and leaders should use the services that they manage on behalf of all Kenyans. E.g. the children of the education minister should attend public schools and the health minister should use public health facilities.

History (of Kenya): President Uhuru Kenyatta should commission an official accurate History of Kenya, going back 1,000 years, whose production will be led by an Office of the Historian resident in the National Archives.

(Digitization of) Land Records: Complete the digitization of land ownership and give the public access to the database. Also, map and publicize government-owned land open for commercial leasing under simple and enforceable terms.

Loan Apps: Properly regulate loan apps which are driving up indebtedness of poor Kenyans to destructive effect with their shylock-level interest rates and borrowing from multiple platforms.

Marginalization: The marginalized should not marginalize others – strong evidence was presented that some communities that complained about marginalization at the national level were themselves guilty of marginalizing minorities in their respective counties.

Media: Kenya needs media that uplifts through investing in quality local content (and) should build programming around Kenyan histories and showing what is exceptional.

Mining: Concessional agreements, policies and regulations in mining and oil should be made public in an accessible manner, including clear accounting for the public participation and environmental impact assessments.

New bodies proposed in the BBI Report:
• A Health Service Commission to look at the human resourcing in the counties.
• A unified and assertive food safety and regulatory body to ensure Kenyan food becomes safe.
• Nairobi be accorded a special status as a capital city that allows the National Government to maintain it as a capital city and as a diplomatic hub.
• A commission to address current boundary conflicts until they are solved.
• (Compel the) Private sector to form a national, non-profit foundation, chaired by the President, that provides mentoring and support to aspiring business owners aged 18–35. It should match the young entrepreneurs with a business development advisor and a nationwide network of volunteer mentors.
• A Government-run national lottery to replace the private betting industry (which is leading to hopelessness and greater poverty)
• A Sovereign Fund that allows for savings in case of emergencies or extraordinary circumstances.
• An Office of the Public Participation Rapporteur mandated to conduct all public participation on behalf of governmental entities at the national and devolved units.
• A Prime Minister, appointed by the President, from the majority party in Parliament.
• A Department of Happiness, Wellness, and Mental Health in the Ministry of Health.
• Baraza la Washauri: The President should benefit from the private advice of eminent, experienced, and honourable citizens serving as a Council of Advisors on a non-salaried basis.

NHIF: The National Hospital Insurance Fund administrative costs should be cut down to 5%-10%. Currently, this is at about 18%.

Privatization: Expedite the privatization of Government shareholding in assets not delivering value to the public and undertake parastatal reforms.
The findings are further summarized to include “parastatals carrying out County functions should be either wound up or restructured.”

Taxation: Have a “flat tax” for every income category above a living wage/income of Kshs 30,000 (~$300) – to reduce tax fraud, encourage compliance, and cut down on corruption in the assessment of taxes.

Tax-cuts:
• Minimize taxation of new and small businesses by giving them a tax holiday of at least seven years as a support to youth entrepreneurship and job creation.
• Cut taxes in relation to Auditor-General audits .. money should remain in Kenyans’ pockets until there is more accountability and governance on its use at the National and County levels
• Also no double taxation and double regulation at the National and County level.

Wealth Declarations: These should be made public and all senior leaders should publish written statements on how they acquired wealth over Kshs 50 million (~$500,000) and have this available on government websites, along with details of shareholdings, partnerships, directorships etc.

(Reward) Whistleblowers: Offer a 5% share of proceeds recovered from anti-corruption prosecutions or actions to the whistleblower whose information is necessary to the success of the asset seizure or successful prosecution.

Way forward: In the BBI report, there is no mention about a public referendum, the TJRC report, and very little about land and historical injustices. It also does not address much on legislative issues such as the two-thirds gender rule, and disputes between the Senate and the National Assembly. Parliament breaks for a two-month Christmas holiday this week, during which the BBI debate is sure to be a topic of much discussion up to February 2020 and beyond.

The Socio-Economic Atlas of Kenya provides a visual look Kenyan statistics, depicting the national population census by county and sub-location and showing the future of Kenya for Vision 2030 and planning purposes. The Atlas booklet that was for sale as a hardback (but also available as a PDF), was produced by the Kenya National Bureau of Statistics and first published in 2014. 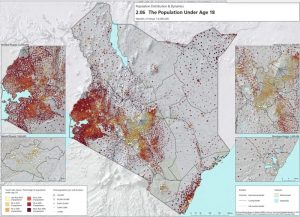 Young population of voters: There are both advantages and disadvantages to Kenya’s youthful population. It represents potential for the future, but it also increases dependency rates and reduces economic participation in the present. Employment creation will be the key to tapping the potential of the expected future labour force and future market opportunities. This implies that job creation is not only a national priority as stipulated in Kenya’s Vision 2030, but that it also requires efforts at the sub-national level; because grossly uneven population distribution will provoke major and increasing migration flows when today’s children and youths reach adulthood. This points to the major role that devolved governance will play in harnessing these potentials and facing the challenges posed by high proportions of young people in the population. 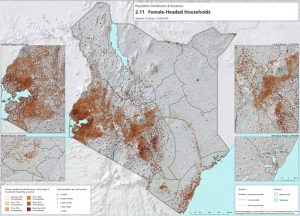 Female economic power: The 2009 census indicates that females head 32% of households in Kenya. This means that females head 2.8 million households, or one in every three. In a basically patriarchal society that assigns household leadership to one person and one gender, this is a high value. It implies that men are absent in one-third of all Kenyan households; in these households, women make the majority of the decisions concerning household matters and livelihoods. 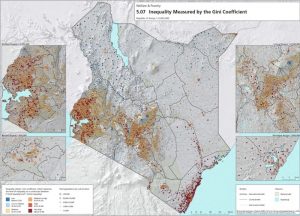 Inequality at the Coast: Kenya’s overall Gini coefficient is 0.45. This value is comparatively high, higher than in neighbouring countries, and means that inequalities are quite pronounced at the national level. This reflects the economic diversity in the country, in particular the gradients between urban economic hubs and rural areas and between high-potential agricultural areas and very poor semi-arid and arid regions. The value is also typical of a nation on the verge of becoming a transition country, exhibiting rapid growth in economic centres and expanding secondary and tertiary sectors.

Purchasing Power is in towns: In 2006 prices, Kenya’s mean per person monthly expenditure for goods and services is KSh 3,430. If a cumulative inflation rate of 93% is applied in line with 2013 prices, this national mean rises to KSh 6,620. By this estimate, an average Kenyan family of five with two parents and three school-age children spends about KSh 26,000 per month on goods and services in 2013 prices. This average monthly estimate includes all monetary expenditures as well as consumption of self-produced farm, garden, and livestock products according to their market value. But the clearest pattern to emerge is that of the rural–urban divide. 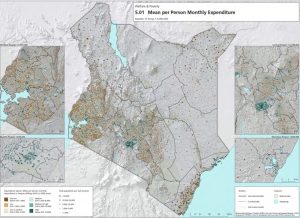 The map illustrates how virtually all of Kenya’s major towns exhibit higher mean per person monthly expenditures than their rural environs. The divide is further underscored by the fact that the two highest classes of mean per person monthly expenditure – i.e. KSh 6,000 to 10,000, and more than KSh 10,000 (in 2006 prices) – are found almost exclusively in urban settings. By contrast, the expenditure classes between KSh 1,000 and 3,500 are mostly found in rural sub-locations.

This emphasizes the role of towns as national and regional economic hubs featuring growing secondary and tertiary sectors and the bulk of formal employment opportunities leading to continued rural–urban migration. At the same time, it is interesting to note that the phenomenon of slums in the major cities is not visible in the rural–urban graph: The very lowest expenditure class (below KSh 1,000) is almost exclusively found in rural settings. Multidimensional poverty measures could help to better capture poverty in urban areas.

Yesterday, the final results of the August 8, 2017, Kenya elections (electionske2017) were announced by the Independent Electoral and Boundaries Commission (IEBC).

This came with the announcement of the presidential results that were delayed by challenges and agreement on the tallying and transmission of the results that were a spillover of lengthy discussions and court cases (the IEBC chairman said they had 200 court cases) on independent candidates, political party petitions, procurement, electronic gadgets, ballot papers, as well as the brutal murder of the IEBC technology manager just a week before the election.

These were the fourth national elections in ten years (2007,2013, 2017 and a constitutional referendum in 2010) and they were closely contested in many places. Besides choosing a new president, 15 million Kenyans also voted on their choice for governor, senator, councilor (MCA), member of parliament (MP), and a county women’s representative from among 14,500 candidates.

But even after the results, there are expectations that dozens of petitions will be filed at the courts on Monday for determination.

For President: The date of the swearing-in of the president constitutionally depends on if there are any petitions

For Members of Parliament: The 12th parliament i.e the national assembly and the senate are to have their first sitting, not more than thirty days after the elections (tentatively not later than September 8, 2017).

Also, see other electionske2017 posts about: