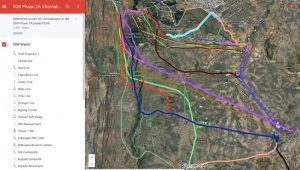 The outcry from President Kibaki’s decision to return the Amboseli Park to the Masai community prior to the 2005 referendum was probably influenced by the impression that community was incompetent and would run down Amboseli reserve in no time. But the Masai Mara, Samburu, Baringo and other reserves are all run by local communities and rather successfully – even from before Kenya got its independence (in 1963).

Narok County Council: Said to be the richest council in the country, thanks largely to its stewardship of the Masai Mara. I can’t vouch for its financial efficiency but they have maintained the park well. They collect gate fees (no KWS smart cards here), undertake road repair within the parks, approve construction/expansion of lodges/camps in the park and hires rangers to guard the animals and the surrounding forest. The revenue collected is meant to be shared among communities and the council also controls the issuance of title deeds to the community with a subtle view to discouraging transfers to ‘outsiders.’

Roads: You need a true 4WD to get around the Mara which can get muddy and flooded when it rains. There is some serious road repair work going on, and roads inside the park are generally better than those leading to the park. However, I get the feeling that it doesn’t bother the tourists as much as it does locals (vehicle owners, hotel suppliers, tour operators) since it’s all part of their TIA experience.

Numbers to know:
5 – The number of airstrips in the Mara
4 – Types of hyaena exist – and that’s how it is spelt, not hyena
0 – Number of lodges that will be constructed inside the Mara as the council feels it is too crowded. Hence new projects are coming up along the fence or just outside the Mara.

More on property development at other parks