This week saw the naming of Kenyan banks alleged to have received funds from the National Youth Service in an unfortunate sleigh of hand as suspects were also charged in courts over fraud and abuse of office at the NYS.

The list of banks includes virtually all the top banks in Kenya – KCB, Equity, Cooperative, Barclays, CFC-Stanbic, Diamond Trust, National and smaller ones such as Consolidated and SACCO’s such as Unaitas. These are all institutions that offer supplier financing/ LPO financing – a popular product sought by young entrepreneurs and companies that allows them to obtain financing to procure and supply goods, under contract, that are then paid for by reputable companies and government agencies, such as the NYS, directly to the banks to recover the amounts advanced.

At this stage it is not clear the depth of the suppliers’ relationship with the institutions, as the banks have all cited customer confidentiality and compliance with the law, but it is doubtful if any will have the peculiar banking arrangements seem in the earlier NYS scandal which resulted in fines and sanctions by the Central Bank and charges filed against senior staff of Family Bank.

The article states that banks had filed statutory reports with the Financial Reporting Centre (FRC) a government institution created with the principal objective being to assist in the identification of the proceeds of crime and the combating of money laundering. The problems are clearly NYS ones, not ones and if any contracts were fraudulent, the fraud is with NYS, not the banks. 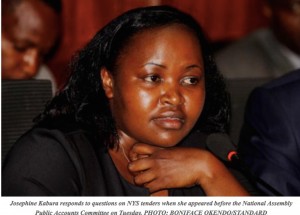 The Central Bank of Kenya (CBK) has sent out new mandatory guidelines to banks to be on the look out for large volumes of cash being transacted over the counter. The notice targets customers who withdraw or deposit cash amounts of Kshs 1 million (~$10,000) or above.

It requires banks to get more information about why their customers are depositing or withdrawing these large sums of cash and query (among other things):

The guidelines are drawn from existing crime and anti-money laundering regulations, and come after other attempts in the past to target money laundering, corruption, terrorism, or crime funds being transferred through mobile phones or remittances / hawala. But it seems, there’s been a realization, probably after investigations into the NYS saga, that cash was moved between banks in paper bags.

In Kenya, large sums (over Kshs 1 million)  are meant to be transferred through electronic funds transfers (EFT) and real-time gross settlement (RTGS). Indeed cheques over Kshs 1 million are not accepted unless they are in support of amounts being transferred between accounts within the same bank.