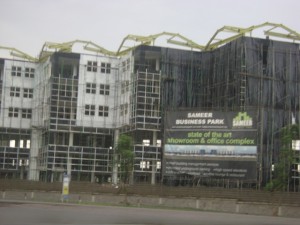 The internet (be it forums or blogs) is being blamed for rumours that drove up the price of Sameer Africa shares to 40 shillings before it again dropped to half it’s take off price.

But Sameer never confirmed, denied or commented on the rumors until now.

But would you buy shares because a stranger wrote something to a blog, or chat room? And it seems far fetched that the readers of Kenyan blogs and chat rooms have enough weight & financial muscle to drive up a share price so drastically. I’m inclined to place blame with others, perhaps brokers, who simply used the ‘internet’ as an extra forum to play around with the share price of Sameer Africa (and who probably cashed out at 40 shillings).

One theory for the massive volumes of Sanmeer Africa (formerly Firestone) shares traded at the is that Bridgestone is finally disposing of its 14.9% (41 million shares) it still holds in company almost two years after the partnership break-up.

Banking
After Barclays last week, three other Banks have just published their results and with 30 days to go in the month, daily newspapers will have at least one bank printing their 2005 results each day by the March 31 deadline.

Those who have done well will publish their results in two or more newspapers (for 300,000 per color page) while the few who have performed poorly can get away with publishing the results in the lower circulation Kenya Times or People newspapers.

Kenya Commercial Bank (Ranked No.3 in assets): Barclays posted a 5% return on assets (ROA) and 47% on return on equity (ROE), while KCB had a 1.9 billion pre-tax profit, 3% ROA and 20% ROE in 2005. The Bank will pay a 1st and final dividend of 4 shillings per share to shareholders after their AGM to be held at KICC on June 16.

Even though customer deposits grew from 52b to 60billion shillings during the year, their loan portfolio remained at 33 billion. The Bank also had to restate their 2004 results as their other income was 477 million and not 785 million shillings.

National Industrial Credit Bank (NIC) (No. 8 in assets): The Ndegwa-controlled NIC Bank posted a 403 million profit before tax, 2% ROA and 16% ROE. The bank’s assets stood at 20.6 billion with customer deposits of 16.6 billion and 14.1 billion in loans at the end of the year. Shareholders will be paid a final dividend of 1.8 shillings per share after their AGM on May 17.

Credit Bank (No 32 in assets): The Nyachae-controlled Credit Bank (90 million profit before tax, 3% ROA and 19% ROE) ended the year with 2.8b in assets, 2b of customer deposits and 1.7b worth of loans.

Kenya’s next bank is expected to be Family Finance which plans to convert from a building society into a Bank by June 2006. With assets of 3.2 billion in June 2005, they will rank as about Bank No. 30 in the country and hired Mr. S. T. Wainaina as their new general manager this week. As such they are hiring;
– Branch managers
– Assistant branch manager
– Branch accountants / supervisors
– Credit officers

Apply by 16 March to the HR manager at info@familyfinance.co.ke. Applicants must be aged 26 – 35 with a business degree and 3 years of relevant experience.

Stanbic: Stanbic which plans to acquire some Kenyan banks, has mini-branches at several Uchumi outlets and now offers a finance plan for Uchumi customers to buy household items such as TV’s, washing machines, cookers, fridges, and furniture.

Sameer: Turnover was flat – a slight increase from 3.27b to 3.36 billion shillings in a year in which the company broke away from the Bridgestone-Firestone company. The change, which entailed increased advertising revenue of the new brands, caused after tax profit to drop from 275m to 205 million. The company’s AGM will be held on March 31 at 11 and a dividend of 0.5 shillings per share has been declared.

Oddly enough, the register for payment of dividends will close on April 5 – after the AGM, not before/on the day of the AGM as is the trend at most companies here. Sameer has also announced that it will cross-list its shares on the Uganda stock exchange.

ICDCI: ICDCI’s six month results showed that investment income increased from 133m to 278m shillings, largely as a result of their off-loading shares in Uchumi. The company also bought 4% of K-Rep Bank in a continuing diversification program.

Coffee industry: The Coffee Board of Kenya launched a new website on February 24. It has up to date results of weekly coffee auctions but some links not working though. Hopefully, this will shine a light on an industry that is booming around the world but collapsing in Kenya (to a point where farmers are uprooting their trees) where it is tightly controlled by an endless cartel of middlemen who shun new ideas (Tetu) and who suffocate and frustrate farmers and new investors.

Future of Giant Parastatals: The Daily Nation looks at the future prospects of Telkom Kenya and the Kenya Power & Lighting Company

Jobs:  The Standard is hiring business executives. Applicants must have business degrees, 1- 3 years work experience, and be aged under than 30. Apply to hrd@eastandard.net by March 8.