Absa Kenya has been holding thought leadership seminars since their rebrand in February 2020.

Last week, Money-Wise with Rina Hicks had a nice talk on “Safeguarding your Family after you’re gone: Wills and More”. Her guest was Leah Kiguatha, a family law expert who said that in the court processes encountered, only 10% of Kenyans of African descent have written wills.

Other excerpts of new stuff (from a male perspective!)

The full hour is online, and you can watch it here.

The East African Development Bank (EADB) is a development finance institution, headquartered in Kampala, Uganda and has country offices in Kenya, Tanzania and Rwanda. It was one of the  few institutions that survived the collapse of the original East African community. Its main products are medium-term financing and its long-term loans for projects that can be durations of 12 years.

The bank is in the news over a case involving Kenya’s Cabinet Secretary Raphael Tuju over their demand that he repays $13.6 million (~Kshs 1.4 billion) that arose from a $9.19 million loan in April 2015.

Excerpts from the 2019 EADB annual report:

Older notes on how EADB is different from a typical commercial bank:

From reading the introduction to a new book (available on Amazon) by Ronald C. Slye,  a Commissioner with the defunct Kenya Truth, Justice, and Reconciliation Commission, he narrates how the Commission evolved and troubles it encountered as it sought to carry out  investigations, through to completing its report and handing it over to Kenya’s President. These included accusations again their Commission Chairman and delays to the release of their report so it did not clash with the 2012-13 Kenya electioneering period as well as demands that some clauses be deleted from the final report.

The foreword of the book written by Reverend Desmond Tutu is also available and he gives some more background to the Commission and Slye’s writing. Tutu writes that the Kenya Government did not support the report, and printed as few of them as possible and Parliament has not debated the TJRC report.

In a chapter, available online, Slye explains how he came to join the Commission and some to the things he went through. He thanks his university, the Seattle University School of Law,  for making the complete TJRC report, in sectors and versions, available online on its website as well as also hosting supporting documents that he researched as the basis for his book.

In terms of finance and budgets, there were allegations against that the commission was a waster of public funds and Slye has dedicated a separate page called “Financial Scandals” that contains documents and correspondence on the financial affairs of the Commission. .. includes the letters written by the Commission to the relevant Parliamentary Committee’s requesting an investigation into the handling of the Commission’s finances by the Ministry of Justice. It also includes the only document the Commission received from the Ministry of Justice in response to our inquiry concerning how our monies were being spent.

Excerpts from the documents; 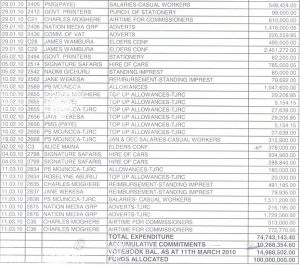 In July 2011 the Commission was accused of corruption through media reports. Slye writes that internal investigations concluded there was no foundation. In their first year (2009-10), their budget was controlled by the Ministry and they had no control of finances till their second financial year. They lacked financial independence, they had to seek Ministry approval of all activities (delayed processes), and had no authority to approve /disapprove expenditure incurred by the Ministry on behalf of TJRC with no knowledge the ministry expenditure beforehand and they were not given a true account of expenditure in the first year.

During their second year (2010-11), they ran low on funds and had to seek advances from the Treasury for 44 million and 80 million from the Ministry of Justice. They requested supplementary funding which never came which allowed hearing in Mount Elgon, Upper Eastern and North Eastern. Eventually, 650 million of the 1.2 billion was released. There were recurrent delays, payments came in tranches, they had to seek loans, and were only able to visit two provinces and hold public hearings.

Office of the Auditor General (OAG):

Meanwhile, the Office of the Auditor General of Kenya mentions the TJRC in some reports: