This morning at a session on currencies and value I got re-introduced to community currencies. Two years ago there was a mini-storm about the legality of a currency called Bangla-pesa that has since quietened down.

There are five Kenyan community currencies that circulate mainly in slum areas of Nairobi and Mombasa. 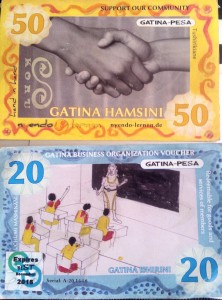 The paper notes are by the Grassroots Economic Foundation.  They are not backed by local currency but have the same value as Kenya shilling notes. Member of groups which have constitutions and rules before they join, each gets currency worth 400. They actually only get 200, and 200 from each member goes to a community fund – to carry out community projects such as trash cleaning and hosting sports events.

The lesson today showed how hawala, bitcoin, and M-pesa had different applications in communities, with a focus on uses away from the formal sector. Also that 10 years after formal financial inclusion, there is still a lot of money being handled through informal sectors.

Bitcoin in Kenya has generated a lot of controversy with the Central Bank of Kenya issuing a public notice warning against the use of bitcoin as a currency within the country. While currency regulation and monetary policy is within the purview of the Central Bank, it is important to dig deeper into what could be the most revolutionary technology of our age and how best we can we move forward with ensuring Kenya and indeed the African continent exploits fully the opportunity that is now within our grasp.

Make no mistake, bitcoin and its underlying blockchain technology will disrupt the current financial order that currently has banking institutions sitting at the top of the food chain. Incumbents who fail to understand and implement strategies risk becoming irrelevant akin to the manner in which Kodak became irrelevant by the advent of Digital Cameras. Indeed Kenyan Banks have already had a taste of this with the arrival of M-Pesa, the mobile money platform, that revolutionized the way Kenyans transfer money and pay for services within the country – amounting to approximately 40% of Kenya’s GDP.

Once again banks and other financial institutions will need to evolve. Bitcoin the world’s first decentralized digital currency is quickly positioning itself as the internet of money; a platform that will allow for instantaneous, immutable and secure exchange of value almost for free and at any given time.

It is important to note that bitcoin the currency is the first successful application of bitcoin the platform. Indeed, the world over, speculators have been the early adopters of this technology, with cases of millions of dollars’ worth of the crypto-currency lost to hacked exchanges across the globe. African Regulators should take time to assess the potential of blockchain technology to reduce costs and enhance transparency within multiple sectors of the economy. For example blockchain technology could eventually provide mechanisms to seal corruption loopholes and track illegal activity such as money laundering at very low costs. Indeed The Central Bank has a constitutional role to manage the country’s fiscal and monetary policy and as such regulating entities such as exchanges that utilize bitcoin the currency is well within their role. This is important to enhance safeguards that ensure consumer protection, prevents money laundering, and monitor transactions for any terrorist activity. This can be done without stifling the technological potential of bitcoin the protocol that is already self-regulating and trust-less.

Blockchain technology has in the recent past become quite popular with banks and financial institutions seeking a way to decentralize storage of information away from traditional databases like the dominant SQL technology. Indeed a number of banks in the United States have formed a Consortium called R3 CEV that intends to develop its own intra-bank blockchain protocol for secure settlement of money transfers between themselves. The World Economic Forum in Davos recently hailed blockchain technology as a revolutionary platform that will dis-intermediate costs associated with middlemen in the remittance space, saving the consumer billions in transfer and other associated costs.

Furthermore blockchain technology will also be critical in addressing corruption in the land sector. Issues such as duplication of title deeds as well as unlawful transfer of land properties will become difficult if not impossible should a public distributed ledger be used to permanently record these transactions. Existing centralized systems allow intermediaries to tamper with records as their databases can be corrupted quite easily.

In conclusion, bitcoin and its underlying blockchain technology offer huge promise in solving many problems across Africa by creating trustless systems that remove the power from centralized intermediaries that could otherwise be corrupted or influenced by power. These technologies can be deployed across many sectors to reduce costs and enhance efficiency. People should not look at bitcoin as a currency alone as that is really only its first application similar to the manner in which email was the first pervasive application of the Internet, which has since developed to include other applications such as web, mobile and even social media applications. Bitcoin and other blockchain applications are creating an Internet of Value where individuals will become even more empowered. Prudent regulation that protects consumers by ensuring third parties that build solutions on top of this technology do not act unfairly is needed. Kenya and Africa, once again have the opportunity to lead World in utilizing innovative and disruptive blockchain technologies such as bitcoin.

John Karanja is the Founder of BitHub Africa a Blockchain Accelerator providing Consultancy and Incubation services for individuals and firms interested in Bitcoin and Blockchain Technology.

On Tuesday, December 15th , the Central Bank of Kenya issued a public notice on bitcoin in the Daily Nation: CAUTION TO THE PUBLIC ON VIRTUAL CURRENCIES SUCH AS BITCOIN – it read. Naturally, as an analyst keen on this space, I had been expecting this. As part of the Bitcoin community here in Kenya, I am a vocal advocate of digital currencies, writing extensively on the subject over the past 2 years. Suffice to say, I have a firm grasp of Bitcoin in whole. CBK assertions were wide off the mark, and I cannot help but question the competency of their research. With this Op Ed, I shall clarify the downright falsehoods in its notice.

Right of the bat, the headline ‘caution on Virtual currencies such as Bitcoin’ is not well thought out. Virtual currencies is a broad term encompassing reward schemes we use in Kenya today – Bonga, Nakumatt, Uchumi points and Kenya Airways (KQ frequent flyer) points. According to the European Central bank, they are ‘digital representations of value not issued by government that can be used for payments.’ Evidently, Bitcoin and bonga points fall in the same category. As such, they should be treated in the same manner, as there is no explicit regulation for virtual currencies in Kenya.

Bitcoin has a unique design, that confounds regulators and monetary authorities attempting to pigeonhole it. It is by no means legal tender in Kenya, nor anywhere else, consequently, its legal status varies substantially from country to country.

For example, US tax authority IRS classifies it as an asset, with tax payable on capital gains. Across the European Union, bitcoin is treated as a means of payment, after a top court ruling in October exempted it from VAT, just like regular cash. On the contrary, a ruling by US Commodities Futures Trading Commission (CFTC) in September, officially defined it as a commodity, just like wheat and crude oil. The UK, considers it as private money and sales of goods and service in exchange for bitcoin are subject to VAT.

Under the hood, bitcoin is an artificially scarce economic incentive for securing a decentralized ‘internet like’ network – the first of its kind. One popular application for it right now, is an open source global payment network but, that is just the tip of the iceberg. You see, the network, referred to as the blockchain in tech circles, is also a platform for building all sorts of fascinating applications never before possible. All are joined at the hip. No wonder, governments and legal experts have trouble confining it. Meanwhile, Silicon Valley hails it as the greatest innovation in the past 100 years – the internet of money.

There is a lot more to bitcoin than could fit this post. My advice is to conduct your own research and due diligence, you will find it fascinating at the very the least. I am confident bitcoin and the blockchain will come out on top as the greatest innovation of our time. Four years from now, we will look back and laugh at how ridiculous this notice was.

Earlier this week, Kenya’s Central Bank put a cautionary notice in the newspapers about the use of virtual currencies like Bitcoin in Kenya.

They did not say it was illegal, but some people have taken the notice to mean that it was, as it the notice alluded to instances of  Bitcoin being used by criminals for money laundering and drug trafficking. The Bank was stating they did not regulate Bitcoin, and nor did any agency in Kenya, but that there was no legal status or protection that came from transacting in Bitcoin.

And today, one of the leading champions of Bitcoin in Kenya, Bitpesa, put a reply advertisement in the same newspaper. They noted that 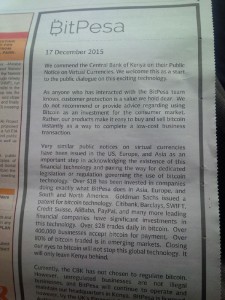 virtual currencies like Bitcoin were gaining users, financial backers, and acceptance the world over – and that $2 billion is traded daily with Bitcoin. They also hinted that there are 4,000 business users of Bitcoin through Bitpesa in Kenya.

Bitpesa are currently embroiled in a dispute with Safaricom, Kenya’s leading telco. Safaricom cut Bitpesa from using their M-Pesa platform a few weeks ago, but they Bitpesa announced that they have since signed up with Airtel Kenya for the customers to use Airtel Money to buy Bitcoin, receive funds, and make payments.

This all harkens back to disputed about seven years ago when Kenya’s leading banks were united in a war against M-Pesa, and they urged the government to curb the potential for M-Pesa to be used for money laundering or criminal possibilities.

Today saw the launch of the Barclays Africa Supply Chain Challenge at the Capital Club in Nairobi. It’s a contest for in which the winner will get a $10,000 prize for using block chains (Wikipedia definition: a block chain (database), is sequential transaction database found in cryptocurrencies derived from bitcoin) to help solve friction in supply chains in any industry.

Barclays was one of the first UK banks to work with bitcoin companies and continues to partner with startups by being their customer and in helping them scale and engage with governments on regulation.

At the event, it was surreal to see bankers showcasing the power of block payments and bitcoin, and at a panel, Elizabeth of Bitpesa spoke of bitcoin as enabling international money transfers, unlike mobile money that’s only within the country. She said the process of licensing in different countries is moving well with many leaning towards licensing of such payments, but Africa is still a grey area with bank regulators yet to decide on bitcoin.

At the launch, Kenyan Information Cabinet Secretary Fred Matiangi said that the government would in October launch an Enterprise Kenya challenge to fund innovators from $1,000 to $10,000 and to get more assistance such as support with intellectual property and market linkage to grow.

Also, businessman, Chris Kirubi spoke about a medical innovation he came up with ten years ago which was a medical smart card that has since saved Kenyan corporations like Barclays millions of shillings in medical fraud, and he wants them to now help him expand the product into other African countries as well.