Genghis Capital has launched its 2020 investment playbook with the theme “harnessing value” after a year in which the Nairobi Securities Exchange (NSE) all share-index had gained 18% compared to a loss of 18% in 2018.

The playbook has a summary of 2019 whose gains were largely due to Safaricom and bank shares, and some of the year’s top deals which included the bank mergers of CBA & NIC and KCB & NBK. Other highlights of the year were the launch of derivative futures and the NSE Ibuka program which has uncovered some promising companies. It also notes the suspension of Mumias which joined Deacons and Athi River Mining as other shares in limbo.

Outlook for 2020: The report includes a macroeconomic outlook for the country this year during which they expect aggressive domestic borrowing by the government, and the Kenya shilling to range between 100 – 104 against the US dollar. They have also factored in the possibility of another Kenya political referendum happening during 2020.

Going forward, they expect that bank shares will do well, but that other equities will struggle this year. They look forward to the opportunity that derivatives have brought of diversification with lower trading costs but note that there is a need to have a market-maker to resolve some liquidity difficulties of trading derivatives.

They also note that the main shareholders at Unga and Express may try again to delist their company shares and take advantage of a new rule that reduces the takeover threshold requirement from being approval by 90% of shareholders to just 50%. Genghis also expect that the nationalization of Kenya Airways will be completed in 2020.

Nairobi-based investment bank Genghis Capital launched their 2019 “investor playbook” with the theme of embracing value. 2018 was a challenging year for the Kenyan economy and capital markets and that is expected to continue in 2019, but this also presents opportunities for investors.

Kenya has a relatively small number of stocks (65) on the Nairobi Stock Exchange (NSE) – and Genghis chose nine stocks as their 2019 financial (banking & insurance) and non-financial picks for investors, in three categories:

They cited that Safaricom scored positively in every category while KCB and Equity banks had embraced digitization, high asset quality and low cost structures.

We're excited about our #Playbook2019 and the value it offers investors.We see the Kenyan market being a phoenix & rising from the ashes of political uncertainty,foreign outflows,a biting credit crunch among others,and offering value to the savvy investor. Contact us for details pic.twitter.com/zBKOkcY8CJ

Other points from the playbook launch presentation:

The end of August marks the deadline for Kenyan banks to publish their unaudited half-year results (January to June 2017). Those of most banks are done and there are some trends, some concerns and some resilience areas seen in what’s been a challenging year for the sector that has for a long time been seen as one that earns super-profits for its shareholders.
The interest rate capping bill was signed last August, and while its initial impact was not fully seen in the 2016 results, one year later these can now be interpreted. The law has had far-reaching impacts on different banks, their performance, operations and strategic directions. Overall, there has been a decline in bank results due to a mix of interest rate caps and digitization, as phones have taken over from branches as the main point for the bulk of customer transactions.
Some observations:
Diamond Trust Bank is back for a fourth rights issue in recent years from its 11,136 shareholders at a rate of (Kshs 165) $1.95 per share, with each shareholder entitled to buy 1 share for every 10 held. This follows others done in 2006, 2007,  2012  and now this one. 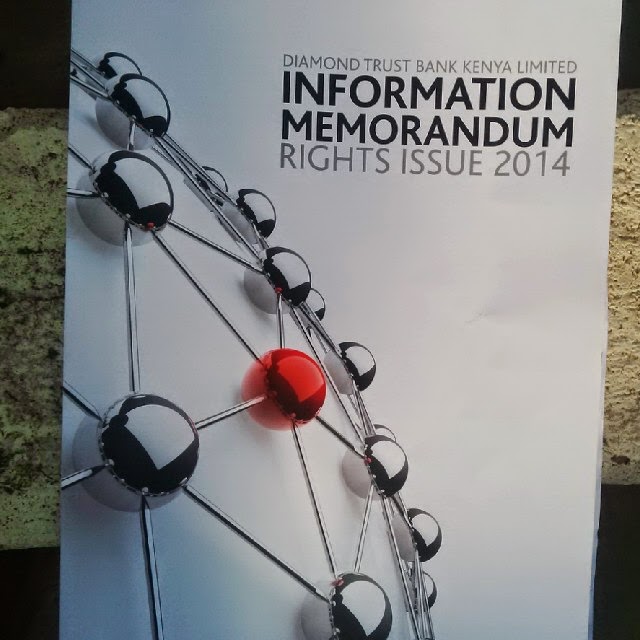 Others
Tweets by bankelele