My Footprints on the Sands of Time is an autobiography by Professor Bethwell Ogot (wikipedia),  an eminent academic scholar. It is a tale of a young man overcoming incredible hardships, and going through early schooling at Maseno, and later through winning scholarships and prizes, on to excelling at Makerere, St. Andrews (Scotland) and teaching with Carey Francis at Alliance High School. It also touches on his work and roles in the establishment of the University of Nairobi, and Maseno University, and at his travels to present papers and speak at prestigious conferences and other institutions across the world.

Ogot narrates tales on growing up in Luo culture, seeing emerging economic changes e.g. he took a honeymoon trip to Uganda in 1959 traveling on first class from Kisumu to Kampala via Nakuru, a twenty-seven-hour train journey. Later, when his father died on August 30, 1978, this was the day before Kenya’s first president Mzee Jomo Kenyatta was to be buried, and it was a period when the sole broadcaster – the Voice of Kenya refused to publish any other death announcements, newspapers would not publish any other obituaries as a sign of respect to Kenyatta, and coffin-makers were not willing to make any other coffins.

He was close to former schoolmates, who were now in government and its leaders. Ogot was waiting to meet Tom Mboya for lunch at the New Stanley Hotel when Mboya was shot (his death was not unexpected to his friends), and Ogot had an encounter with Mboya’s killer who was fleeing the scene.  He writes of his work to establish and get government and financial support for the Ramogi Institute of Advanced Technology – RIAT and a delicate dance with community leaders including Oginga Odinga who was firmly out of government. 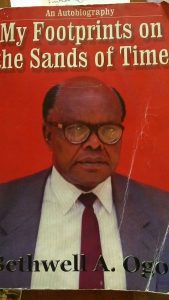 The book has a wealth of information on corporate governance and management from Ogot’s time at regional bodies, parastatals, international organizations, donor-funded ones, universities that were in slow decline and government. He writes of working in research and publishing, and struggling to document and publish African history. Also of his times at the East African Publishing House that published books on political science, history, geography and a modern African library with much opposition from British Publishers who controlled publishing and later from government officials who set out to shut down independent academic stories. They published Okot p’Bitek’s Song of Lawino that some critics considered a terrible poem ahead of its publication but which went on to be celebrated and sell over 25,000 copies.

There are also stories of navigating the East African Legislative Assembly, travels around East Africa, interacting with leaders and observing actions that were either supporting or undermining the East African Community. Uganda’s President Amin spoke of supporting the community even as he launched Uganda Airlines that he said would only do domestic flights in Uganda. There was also the importation of goods for Zambia through Mombasa that undermined the Dar es Salaam port and the Tazara railway, so Tanzania banned Kenyans trucks with excess tonnage from using their highways, and Kenya retaliated by closing its border with Tanzania. Officials in different countries also tried to keep community assets from leaving their borders, and Kenya grounded planes and withheld fuel of East Africa Airways which owed money to Kenya banks in a move designed to hurt vast Tanzania the most.

The most shocking tales are from his time working at the Museums of Kenya and its spinoff that saw Ogot as the first director of The International Louis Leakey Memorial Institute for African Prehistory – TILLMIAP (see an excerpt). It is a serious indictment of Richard Leakey who regarded TILLMIAP as his personal family fund-raising institution and who, with the support of Charles Njonjo in government and diplomats and donor agencies, warded off transparency and Africanization efforts – and was eventually to hound Ogot out of the institution.

Another tale is of when, as the candidate representing Africa on the executive board of UNESCO, he ran for the Presidency of the General Conference. But what should have been a formality of confirming his position became a long process after a surprise Senegalese candidate emerged to run against him – and France lobbied Francophone countries to only vote for a French-speaking African candidate, rules were changed, documents forged, and additional multiple election steps added before Ogot finally won.

The 500+ page book by Prof. Ogot does not have an index, but it’s worth reading all over again.