Indian Africa, minorities of Indian-Pakistani origin in Eastern Africa, is a 484-page book with lots of information, charts, statistics and stories of the arrival and enduring impact of Indians in East Africa: 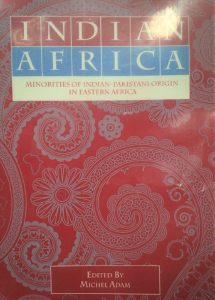 The book, edited by Michel Adam is published by Mkuki na Nyota publishers of Dar es Salaam and the French Institute for Research in Africa and distributed outside Africa by the African Books collective.