CBA has been in the news as it was reported to have facilitated bail in an ongoing criminal case.  It’s not common to see a bank linked to a case.

The bank issued a statement to clarify that it was not a party to the case. It only issued a guarantee of Kshs 140 million to its customer which is a law firm, and it  is presumed that the law firm used that to arrange to release the accused person in the case.

Most of the time a court demands bail or bond in Kenya, it is usually presented as cash or vehicle logbooks or land title-deeds. It’s rare to have a bank guarantee. But the amount called for in this case is quite large, and it is doubtful that any of these regular items offered as bail would be arranged at short notice. The Kshs 140 million guarantee is equal to about $1.39 million or  £1.05 million. 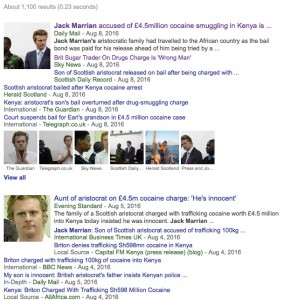 News coverage of the case

Bank’s do offer several forms of guarantees mainly as trade finance or insurance products. The guarantee in this case ensures that the defendant will show up in court during the case. If not, then the bank will have to pay the court the amount on behalf of the law firm.

The case is being covered extensively in Kenya and UK media because of the defendant, a commodities trader whose firm was found to be moving a consignment that apparently contained illegal drugs.