Sports betting used to be done at the Ngong horse races, and in a few casinos around Nairobi that have red carpet entrances. Now you don’t have to visit the casinos to place bets, as the mobile phone has become enables this. 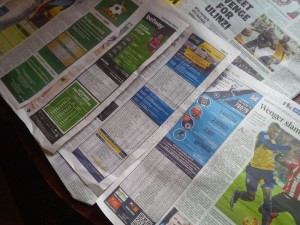 Every day, the sports pages of the newspapers have about four (4) color half-page advertisements by different mobile sports platforms, enticing fans to bet on various matches, usually the English premier League. That’s a serious investment, and some are probably already making it back from the sport-betting public. The companies all have busy social media accounts, sign up via SMS, and mobile money payment options – mainly Mpesa.
Here are the main ones making a splash now (in no particular order):
5 Bet Yetu
Twitter: @betyetu
Phone: SMS amount to 29111
Payments: mpesa paybill 850704
4 Mcheza
The new arrival has media personalities Julie Gichuru and Carol Radull as promoters and had the (under-performing) sport cabinet Secretary, Dr. Hassan Wario, as the chief guest at their official launch this month. Bills that you can bet on 277 different leagues, including Australia, Belgium, English (BPL),  Scottish etc. using their platform.
Twitter:  @MchezaKE #chezanamcheza
Phone: SMS cheza 29888
Payment: Mpesa top up 295525
3 Betway
Bills that they are the official sponsor of West Ham United, you can bet on the BPL and Italian leagues, and that they have a Kshs 9 million (~$90,000) jackpot
Twitter: @betway_ke #betwayinkenya
Phone: SMS fixtures to 29029
Payment: lipa na mpesa 880185
2 Betin Kenya
Bills that they have a Kshs 10 million jackpot and that they have Kenya’s best betting service. I get their email alerts even though I’m not signed on any league and it’s interesting that you can bet on many diverse events such as rugby and American Football, tennis, and, even politics like who will be the new US president in 2016 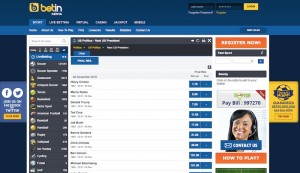 Twitter: @betinkenya
Phone: SMS join 29456
Payments: paybill 997270
1 Sport Pesa
Bill that they are Africa’s number one sports betting platform and official sponsor of the SportPesa premier league in Kenya. Also that they have a Kshs 18.5 million ($185,000) bonus and one can bet on the BPL, Euro, Middle East, and other leagues.

Phone: SMS game 79079 (Kshs 2 per SMS)
Payment: Mpesa paybill, airtel money, orange money
It’s amazing that even in faraway places, in rural Kenya, you find young men who are on the platforms. They may not even be able to watch the matches but can bet on them – even in places where it costs kshs 20 – 50 to watch an afternoon’s worth of English Premier League matches. If there are simultaneous matches, the kiosk owners change the channels to the different matches every few minutes to keep up with the action.

One thought on “Sports Betting Comes of Age in Kenya”