There was a dinner last week in Nairobi to toast James Mwangi the CEO of Equity Bank who won the second edition of the Forbes Africa Person of the year award (edging out President Joyce Banda of Malawi, Stephen Saad, Aliko Dangote & Tony Elumelu. In capping off this award-winning year for him, he spoke about the need for Africans, and particularly Kenyans to celebrate wealth and success not to be shy & hide about it. 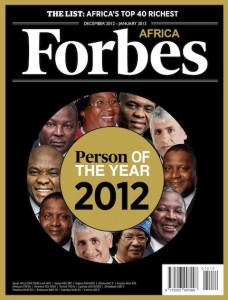 This has been something that Ory (@kenyanpundit) has spoken of in the past and a reason that there are few interesting award events to attend – as you keep seeing the same people & companies over and over being feted or speaking at events over and over  –as if they are the only entrepreneurs in town. Yet it if you look at the construction that the construction that’s changing Nairobi from Westlands to Eastlands, with new office towers, hotels, and residential estates, this is all private sector development largely done by anonymous entrepreneurs using vague company names.

The Forbes list of Richest Africans itself may be controversial  – in the region Kenya had Naushad Merali, Tanzania has Salim Bakhresa, and Uganda had Sudhir Ruparelia, and dropping off from last year’s list were Uhuru Kenyatta, Chris Kirubi, Mohamed Al Fayed and Strive Masiyiwa.

For various reasons – modesty, not wanting your rivals to know what you’re up to, fear of revealing secrets and business interests to creditors, or even family members, some entrepreneurs are shy about celebrating their success in public or with the media. But perhaps, the biggest reason for a successful entrepreneur to keep a low profile is because the tax collectors at the Kenya Revenue Authority (KRA) are also avid readers and viewers – and a high profile celebration, with dollar figures attached, is likely to be followed by a friendly visit by tax agents.