Boeing brought a new 787 aircraft to Nairobi as part of their Dreamliner World Tour in mid-December. 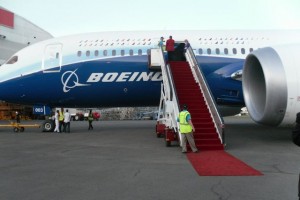 Boeing were presenting the plane to their customers who had ordered the plane in record numbers, but then had to wait for a few years more for delivery due to delays in completion of the plane. It’s first flight was scheduled for 7th August 2007 (07-08-07) but this took place in 2010 and while airlines like Kenya Airways were supposed to have received Dreamliner planes in September 2010, currently there are still only 2 Dreamliner planes in customer service (both with All Nippon Airways Japan. And while Kenya Airways (KQ) had billboards and newspaper adverts showing the 787 plane in their corporate colours, it was a Boeing coloured jet that was flown in by KQ’s Captain Paul Mwangi after a similar presentation in Addis Ababa.

There was a dinner held at the KQ headquarters the second night that the Dreamliner was in Nairobi that I was fortunate to attend. It was also a treat to meet many of the 40 staff Boeing staff who accompanied the plane on the tour through Africa and the plane attracted hundreds of visitors including local CEO’s, passengers and even a Kenyan born Rolls Royce engineer.

MC Jeff Koinange started the evening off with his tales of how he used to be a PanAm airline steward making on board announcements and this led to the discovery that his voice would take him into journalism, and later Prime Minister Raila Odinga talked growing up in UK (Kisumu) where he watched amphibious planes land on Lake Victoria (flying routes from Europe through Benghazi, Khartoum, Juba, Kisumu, Salisbury, Johannesburg) and later recapped a sequential history of Boeing aircraft development. He later spoke of KQ which rose out of the grounding of East African Airlines, it’s early loss making years as a state airlines, the heavily debated decision to privatize it, the repayment it has made to Kenyan taxpayers, and plans to make Nairobi for an African hub with a new terminal to be built next to presidential pavilion and a second runway (reason for Syokimau demolitions) 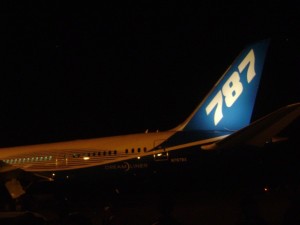 KQ Expansion: The Airlines CEO, Titus Naikuni, spoke of the group’s turnover of Kshs 90 billion and plans to double the fleet from 34 to 68 aircraft in five years (now ordered 787 and Embraer and 777-300’s which can carry 400 passengers towards that). But he cautioned that there are not enough pilots in the country (that days’ newspapers had KQ ad’s seeking new pilots for Embraer jets) and that the airline may hire foreign pilots’ out of necessity . He also said that they are happy that the airport (JKIA) is now showing construction progress and commended the Kenya Transport ministry for bilateral negotiations that have enabled the airline to fly new routes in Africa.

Ethiopian vs. KQ: As KQ prepared for their Dreamliner arrival & party events, Ethiopian Airlines ran some in-your-face ads in Kenyan newspaper with the caption that the first 787 landing in Africa was at Addis Ababa, and flown by an Ethiopian pilot. True on both – as Ethiopian Airlines which is a much older airline than Kenya Airways, with a longer history with Boeing and closer relationship in terms of customers, maintenance, training etc. Ethiopian was the first African Airlines to order the 787, (and they have even ordered Airbus A350 which is yet to be built) 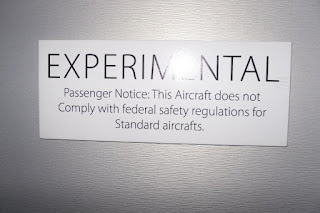 Dream Flight?: There was some expectation over the three days that invited guests of Kenya Airways would get to fly on the 787 over Kilimanjaro and Mombasa but that was not to happen. The flight took place with on the last days with only a few Kenya Airways staff on-board, and passengers will have to wait till the end of 2013 to fly on KQ – or given the local African rivalry, Ethiopian may use one on the Addis Nairobi route to feed off our impatience!

Read more on the 787 Dreamliner