The Total Motor show took place this last weekend in Nairobi (Friday 9th to Sunday, September 11, 2011). It was interesting as usual, but this time it was at KICC unlike the last one that was at the Ngong Racecourse. With the weaker shilling, and higher petrol prices, there was a noted change in some vehicle prices and more companies offering more efficient vehicle management solutions. 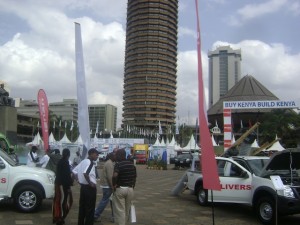 Companies like CMC (Ford, Jaguar, Volkswagen) and Toyota did not display prices, but it was a shock to hear that a Toyota Corolla 1.8, cost Kshs 3.3M ($36,000) which is about three times the price people pay for used import models.

Public Service Vehicles: Companies like General Motors have their Isuzu’s ready to ride on the Government’s plans for larger PSV vehicles and they had a pimped out matatu – the NPR that costs Kshs 4M ($43,000), and an Isuzu FRR model (Used by many Citi Hoppa’s operators and which costs Kshs 5.8M ($63,000) and a 62- seat bus that was Kshs 9.4M 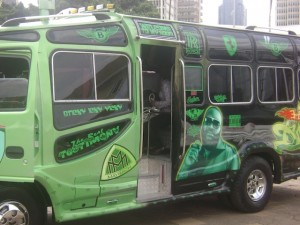 Trucks: These were a plenty, but the trucking “king of the road” is the Mercedes Actros; new models of these can be bought via D.T. Dobie at a cost of €93,500 (~Kshs 12.2 million) and each order is customized to the buyer’s requirements before it is built. The popular Mitsubishi FH215 is Kshs. 5.1M

Pick-Up/SUV: DT Dobie has the Nissan NP 200, launched at the 2009 motor show at Kshs 1.2 million, but which now costs Kshs 1.87 million and CMC had a new Volkswagen pickup that was not priced. Mitsubishi had an L200 double cab at Kshs 4.1 million, an update of the popular Pajero at Kshs 6.5 million, while Mahindra had pickups ranging between Kshs 2.4 – 2.9 million. 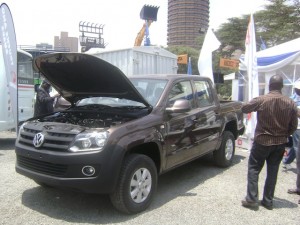 With rising fuel-prices, fuel saving solutions on offer include Stoic (touting to save up to 40% on fuel prices) and Fuel max (sold by Kiprin Enterprises – and enticing with savings of up to 50%). Other energy savers were Solar-powered lanterns called Total Sola from sponsor Total. Better driving solutions were offered by Glen Edmunds driving school for defensive driving while Scania had one for long distance truck drivers that are purported to save 6 litres per 100 kilometers driven (from the current average of 40 litres over 100 kilometers) and which also brings better tyre and break wear

Other: Toyota also sell Yamaha motor bikes including a 106CC model which comes with a free helmet, reflect jacket, registration and one year warranty (or 6,000 km)

Car Tracking: Companies included Rivercross tracking (who also install a fuel monitor that warns when truck drivers may be selling diesel from their trucks) as were other companies like Retriever, and Cyber Trace.

Online Classifieds: Car buyers and sellers had cheki and dealfish (which is free for buyers & sellers)

Banks: Banks in the auto finance sector were represented at the show including NIC, KCB, Equity, Imperial, Co-Op, Chase and CFCStanbic. Co-op have PSV financing (aimed at Sacco’s) and school bus financing (unique application requirement are board of governor approval and minutes, and ID, fees structure of school.

Apprentice: A motor show surprise was a twitter conversation with @karuoro and @mediamk on the prevalence of former D.T. Dobie mechanics who are specialists in Mercedes.

– @bankelele: I know about 3 garages run by ex-DT Dobie mechs (it’s like a badge of honour)
– @mediamk: those mechs are amazing, I wish this was the case across different industries (as) apprenticeship is a good way to grow an industry.
– @karuoro: “The industry leader is obliged to be a net supplier of talent to the industry” – Linus Gitahi (@LGTwits) …I think quite a number are licensees. 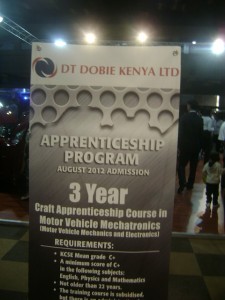 The D T Dobie apprenticeship mechanic program is open to all Kenyans, male & female, who are less than 22 years and obtained KCSE C+ in English physics and mathematics. Though subsidized it will cost Kshs 50,000 ($550)per year for three years after which staff will be bonded for 3 years. They also accept self-sponsored applicants who will pay Kshs 140,000, and the application deadline is 30 April 2012.