This week, I spent a crazy morning at another queue, this time at the Kenya Revenue Authority (KRA) trying to pay a monthly tax. When I arrived there, the line was about 12 people long, which was a relief because sometimes you can find more than 30 people.

However that turned out to be a false hope because there was only one teller counter that was manned and serving customers, and at a very slow pace. We stood there patiently for about an hour, barely moving, as it dawned on us that some things were not right.

One old man in the queue went go get a supervisor since there was none in sight to complain to except a G4S security guard, handing out forms to be filled. He came back after half an hour to find us pretty much in the same position. He had tales of being passed around from supervisor to supervisor’s in the next building but he would not relent until he reached someone ‘senior.’ 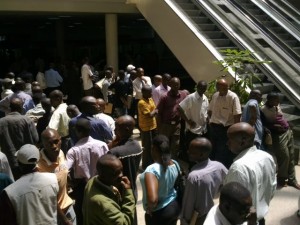 Willing, but frustrated taxpayers: Kenya is ranked no 162 in this PWC survey on ease of tax payments – a figure I disagree with. KRA has made it simpler for other taxes to be collected e.g. Pay As You Earn (PAYE/payroll) taxes are paid at commercial banks where the employer has an account – the cash goes to KRA’s account instantly (no 4 day wait for this cheque). Today, I wished they would extend the same for other taxes too so that people don’t have to comes to Times Tower (KRA headquarters).

There are similar queues for driver licenses renewals of either 1 or 3 years, though sometimes some of the stickers are missing, so you can only buy the ones available that day. There alao used to be more for annual vehicle license renewals (calculated on a vehicle engine size), but that was changed a few years ago and built into the price of a litre of petrol and diesel.

Staffing: This morning, the sole teller worked for about an hour by himself, next to six empty teller windows (which is a worse display of customer service than a certain large bank). It inspired camaraderie as we all shared battle stories from previous visits to the building.
– ‘This line is nothing, you should have seen the one last month’
– ‘The line was so long yesterday, I walked out and came back today’
– ‘I will train someone else in the office to come here next month’
– ‘There are so many unemployed boys, why not give them these jobs, if KRA is under-staffed’
– ‘They do about seven people an hour, I’ve counted…’.
and
– ‘The reason these guys are slow is women should do the job. Men can’t type into computers & process payments like women. If women were given these jobs, there would be no queues as they’d process taxpayers do fast’.

(So I jumped into Google and found this yahoo thread that answered that very query – and it listed counselors, coders, surgeons, child care, nursing care, as jobs that women can do better than men, but nothing about tax collectors)

Queue management: Banks and the government have data collected by their systems and HR managers to know how many customers they have in any month. It can further be broken down into which days and which hours they get peak customer traffic. Supermarkets know this and match their staff shifts to customer numbers, but it can be extended further. I was also at a bank hall this morning and it was completely empty, with no customers waiting to be served. Why? Probably because it’s the middle of the month and many customers, who are dependent on monthly paycheques have no need for their banks mid-month.

KRA likewise should anticipate dates like the 9th, 20th and 25th of each month will have peak volumes and deploy more staff to man front desk counters on these days, so they end up with long queues of frustrated small business customers and taxpayers.

2 thoughts on “Queues make you think”