The issue is not underwritten and is subject to a minimum subscription level of 50% i.e. must raise at least 7.5 billion. The shares will also be available to other east African investors in Uganda, Tanzania, and Rwanda. Rights also provided a way for shareholders to buy shares for close relatives by way of private placements. 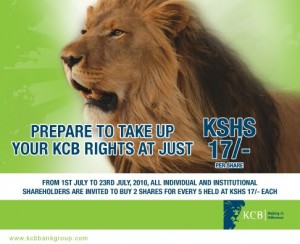 The prospectus (IM) (PDF) was not mass mailed this time, but is available only from their web site, stockbroker, and branches of the bank.

Market players: The lead sponsoring stockbroker is Standard Investment Bank and they are also the lead transaction advisers along with KPMG. In Kenya, there are 18 NSE members selling the shares [including discount securities under statutory management, and reliable securities (in which Old Mutual acquired a 70% stake)] as well as 6 commercial banks with large branch networks – Stanchart, Equity, National, Co-op, Barclays and KCB itself)

Verdict: The rights started trading at over 1 shilling, but in the span of a week have dipped by 50% to about 0.5 shillings per share. Stockbrokers say that demand is good for the shares but that they anticipate the Government and one other top shareholder (one on CNBC said it would be the NSSF) are foregoing the offer and selling their rights before the offer lapses leading to the dip in the rights price.

Investment analyst have variously complained about the massive amount of shares being listed, dilution of existing shareholders, and the large amount of money being raised by the bank, which they doubt has the capacity to utilize the infusion efficiently. One analyst from Renaissance Capital said they had downgraded KCB when the rights issue was announced.