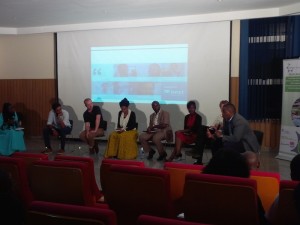 Excerpts from the event sorted by subject

Agri-Economy  Agriculture is 26% of Kenya’s GDP and employs 80% of the rural population. It comprises 40% of exports and 45% of govt. revenue and 7% of industrial raw materials – KCIC rep

What’s the Next Big Thing in AgTech?

The outreach manager of KCIC said they provide entrepreneurs with an enabling environment (policy) for innovation, business advisory services and financing opportunities [for (1) proof of concept financing  and (2) a seed facility of climate change venture funding of $100,000-500,000 of  growth capital for entrepreneurs from June 2016]