Base Titanium was recently made a Kenya Vision 2030 Flagship Project for the mining sector and continue to share updates as part of their commitment under the Extractive Industries Transparency Initiative (EITI).

For the financial year which ended in  June 2017, they had sales of $215 million, and a net profit of $21 million, compared to a loss of net loss of $20 million the year before. They reduced net debt by $76 million during the year, then reduced it further by $12 million to stand at $87 million at the end of the September 2017 quarter. Base Titanium are still owed $21 million in VAT tax refunds and all payments are still done to the national government though Kenya’s new mining law (currently in limbo) calls for separate payments to be made to the county government and the community. They are also still paying royalties at the rate of 2.5% while accruing another 2.5% in anticipation of the government changing this to 5%.

Base Titanium now moves into a second phase of production of the Kwale mineral sands project, investing $30 million in a more intense process of increased mining capacity, as they aim to maintain production of 450,000 of ilmenite, 88,000 tons of rutile and 33,000 tons of zircon a year even as they also target to retain their safety performance record which saw no lost time injuries in the last quarter.

Base Titanium will also shift to a different field (South Dune) at Kwale in two years when the current field (Central Dune) is exhausted and which they have commenced rehabilitating the depleted areas with vegetation. 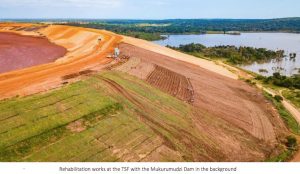 They are also waiting to commence more exploration in Tanzania, in December, and in Kenya, in 2018. In Tanzania, where they hold 5 prospecting licenses, they await availability of drilling rigs while in Kenya they await completion of a report by a new mineral rights board for the Cabinet Secretary for Mining to approve further exploration in Kwale.

Base Titanium has also spent $10 million ( – about Kshs 1 billion) on the community development projects. These include educational support that has seen 1,000 get scholarships in Kwale, while in agriculture, they are working with the national and the Kwale county government to assist over 900 local farmers and groups grow crops like potato, sorghum, and even cotton that is exported to Bangladesh for garment-making.