Kenya’s 12-year Eurobond, in which the Government sought to raise $1 billion, attracted offers worth $5.4 billion after a three-day virtual roadshow with European investors.

Here’s a peek at a draft 223-page prospectus

Advisors to the National Treasury were Citigroup and J.P. Morgan Securities as book runners, co-managers were NCBA and I&M banks, Citi was also the paying agent and registrar, while legal advisors were Dentons, White & Case, Dentons Hamilton Harrison & Matthews and Coulson Harney.

The government will not participate in the recapitalization of the National Bank of Kenya and plans to divest from commercial banking.

Debt rescheduling: During Covid, Kenya secured debt suspension relief from eight out of its 10 Paris Club member creditors, and China for a total of Kshs 38 billion of 68 billion requested, to free up liquidity for Covid-19 pandemic-related expenditures.

Default: Is non-payment of the principal for 15 days after it falls due or interest for 30 days after the due date. Also if Kenya ceases to be a member of the IMF or default on another security by $25 million.

Litigation: Any disputes shall be resolved under arbitration rules of the London Court of International Arbitration and shall be lodged through the High Commissioner of Kenya in London.

London Bond Listing: An application has been made to list and trade the notes on the London Stock Exchange. Notes are in denominations of $200,000

In April 2019, the Auditor General issued a special audit report on the 2014 Eurobond and found the funds were fungible utilized but some were spent outside the Government’s IFMIS.

Purpose: The Kenya Government intends to use the funds for general budgetary expenditures.

Repayments are made in US dollars.

SGR: In January 2021, Kenya secured a debt suspension from China of a loan by Eximbank to fund Kenya’s SGR. US$378 million, will be repaid over five years, after a grace period of one year, in ten equal, semi-annual installments.

The Kenya Electricity Transmission Company recently signed a contract with China Electric Power Equipment and Technology Company for the electrification of this section of the Mombasa-Nairobi railway.

Subscription: In case, the bond was under-subscribed, Citigroup, J.P. Morgan, I&M and NCBA would have filled the gap.

Taxes: All payments are made, without deducting withholding tax. Also, interest payable on the notes has been exempted from income tax and capital gains tax in Kenya.

Default (defined as): Failure to pay 15 days after due date, or issuer (Kenya government) ceases to be a member of the IMF.

Denomination: The Notes are issued in registered form in denominations of US$200,000 and integral multiples of US$1,000.

Disclosure: The Issuer will publish all notices and other matters required to be published (regarding Condition 14, 10, 13: on the website of the National Treasury.

IMF: The second and third reviews of the IMF programme due in June 2017 and December 2017 could not be completed on time due to the prolonged election period. Accordingly, no funds under the SBA-SCF 2 facility are available to Kenya until it has reached certain targets to the satisfaction of the IMF, which will be assessed at the next review. But, even if the IMF agrees to make this or another programme available upon conclusion of their review, the government intends to continue to treat the arrangements as precautionary and does not intend to draw on the facility unless exogenous shocks lead to an actual balance of payments need.

Income tax (enhancement of): A review of the Income Tax Act is ongoing and is targeted to be completed by mid-2018. In an effort to boost domestic revenue mobilisation, the government is undertaking reforms to bolster revenue yields  including roll out of the integrated customs management system, implementation of the regional electronic cargo tracking (RECTS) to tackle transit diversion; data matching and use of third-party data to enhance compliance, integration of iTax with IFMIS to ensure timely collection of withholding VAT and other withholding taxes; expansion of tax base by targeting the informal sector, betting, lotteries and gaming; pursuit non-filers and increased focus on taxation of international transactions and transfer pricing and enhance investigations and intelligence capacity to support revenue collection.

Informal economy: A significant portion of the Kenyan economy is not recorded and is only partially taxed, resulting in a lack of revenue for the government, ineffective regulation, unreliability of statistical information (including the understatement of GDP and the contribution to GDP of various sectors) and inability to monitor or otherwise regulate a large portion of the economy.

Litigation:  The Issuer has appointed the High Commissioner of the Republic of Kenya in London, presently located at 45 Portland Place, London W1B 1AS as its agent for service of process in relation to any proceedings (“Proceedings”) before the English courts permitted by

Indebtedness:  Total national government debt stood at US$41.2 billion as at 30 June 2017, representing a 17% increase from June 2016. The government is permitted under the terms of the PFMA to incur debt within the limits set by Parliament, currently set at 50% of GDP in net present value terms. Following the issue of the (Eurobond) Notes, the total net present value of debt as a percentage of GDP is expected to nearly reach the 50% limit. Although the government may be restricted from incurring further public debt under such circumstances, the Government will be seeking to refinance or repay near-term maturities, and therefore expects to maintain the ratios within the set limits.

Purpose Kenya expects the net proceeds of the issue of the Eurobond Notes, before expenses, to amount to approximately US$1,999,600,000 which it intends to use for financing development expenditures and to refinance part of its obligations outstanding under certain syndicated loan agreements. According to the “Plan of Distribution”, Kenya syndicated loans of from October 2015 (debt now $646 million) and March 2017 ($1 billion)  and proceed from the new February 2018 issue will be used to pay all of the 2015 loan and part of the 2017 loan and  to “manage the maturity profile of the government’s debt.”

Repayments: (for both issues) payable semi-annually in arrears on 28 February and 28 August in each year commencing on 28 August 2018. The Eurobond Notes are not redeemable prior to maturity.

Withholding Taxes: All payments in respect of the Eurobond Notes by or on behalf of the Issuer shall be made without withholding or deduction of any present or future taxes,

See Part I about the 2014 Eurobond issue.

Kenya’s National Treasury has just announced a new $2 billion Eurobond which was seven times oversubscribed amid concerns about the country’s debt levels and intrigues about the availability of an IMF financing line.

The official Kenya Government statement reads: The fact that we got $14billion in investor appetite reflected the continued support the country receives. We now have a dollar yield curve stretching out to 30 years, making Kenya one of only a handful of government’s in Africa to achieve this.

The funds are earmarked for development initiatives, liquidity management, and ambitious infrastructure programs. It goes further to add that the Eurobond issue will be listed on the London Stock Exchange and that the joint Mandated arrangers were Citi, J.P. Morgan, Standard Bank, and Standard Chartered Bank.

The @KeTreasury is pleased to announce the successful pricing of a new $2billion Eurobond issue at the @LSEplc following a successful roadshow conducted with international investors which resulted in a significant level of interest expressed in the issue. #EconomyKE pic.twitter.com/U5kK8Eg1JR

There was little awareness about the bond, no prospectus was publicly released, and there was no indication on which investors the Eurobond was being pitched to, but it appears that the successful issue will be dated February 28, 2018.

The announcement comes after some potentially embarrassing news reports that the International Monetary Fund had cut off a line of funding, a statement which was later retracted, and others that Moody’s had downgraded Kenya’s ratings, a claim which the government also disputed.

But the ratings cut, and the mysterious IMF news (and retraction) did not appear to have an impact on the pitch to investors.

There was a lot of expectation that he was there to talk about Eurobond but that wasn’t the case and it was merely one subject he touched on in his talks about his role and the  functions in the government, and economic outlook for Kenya.

In his intro, host Aly-Khan Satchu said that the Kenya Eurobond was perfectly timed and a stunning issue at 6.875%, the largest SSA bond in recent times. It has helped the shilling outperform many currencies – only losing 11% against the dollar, compared to the Rand (-39%), Angola (-50%) and Kwacha (-73). KCB CEO Joshua Oigara noted that people outside Kenya are more confident than people within, and people who are doing great things, should know that a certain percentage will not agree with you. 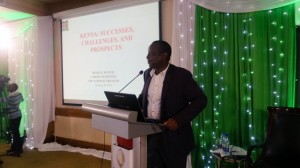