Nigeria: The Central Bank of Nigeria set a tariff of 3% for deposits and 2% for withdrawals of  more than Naira 500,000 (equivalent to ~$1,380) from individual accounts. They also set a tariff of 5% for withdrawals from corporate accounts, and 3% for deposits, over Naira 3 Million (equivalent to ~$8,280) from corporate accounts. This is in the states of Lagos, Ogun, Kano, Abia, Anambra, and Rivers States as well as the Federal Capital Territory. This is to promote cashless transactions. (Source)

Uganda: The Bank of Uganda has banned merchants from imposing surcharges for the use of electronic card payments and also the setting of minimum and maxim amounts that can be transacted on cars. In addition, they have asked banks in Uganda to harmonize tariffs that they levy on customers of banks for when they use each other’s ATM’s.

Prohibition of Merchant surcharge and the fixing of minimum/maximum transaction amounts on electronic Payment Card pic.twitter.com/DjbDUEpr99

Kenya: Today is the deadline set by Kenya’s Central Bank after which the old series of the Kshs 1,000 (~$10 notes), bearing the image of the first President of Kenya, will cease to become legal  tender for transacting in the country.

Tanzania: Mobile app lender Tala suspended issuing loans in Tanzania. The company which claims to have lent over $1 billion to 4 million individuals will continue in Kenya which they say, with 3 million customers, is a critical part of their global business, and where they are piloting new financial education services. California-headquartered Tala also has customers in The Philippines, Mexico and India, and is backed by investors like PayPal, IVP, and Revolution Growth.

-In Zimbabwe, $1 in cash is worth ~$1.50 in digital money
-This wedge is due to the government's bad monetary policies
-The government has blamed mobile money operator Ecocash, banning it from offering cash-ins/cash-outs
-Which only widens the wedge! https://t.co/lUVCFLLl4e https://t.co/AVrxnADghG

Zimbabwe: The Cashless push has gone awry in Zimbabwe where the Government has now banned Ecocash agents from making cash deposits and withdrawals for customers as these are now happening at values that are at variance. This has resulted in a situation where $1 in cash is worth ~$1.50 in digital money.

Ecocash is the second largest mobile money company in Africa; we watched what Asia did and what M-Pesa did. We also drive savings (launched a mobile govt. bond after M-Akiba) and insurance (now are the largest digital micro -insurer in Africa) – @JabangwePNN #AfroAsiaFintechFest

Have cards peaked? Statistics from the Central Bank (CBK) show that Kenya has 220,000 credit cards and 12.4 million debit cards, but that a decline in card usage can be attributed to increased usage of other payment channels like mobile money transfer services.

We all have ATM cards that are in effect debit cards. There are also prepaid-debit cards such as I&M (multi-currency), Bank of Africa (Toucan), Nakumatt (global) etc. They are good for making online purchases, payments as supermarkets, and sometimes for overseas travel payments.

Other notes about the cards:

The future is said to be digital or cashless. So can one live and transact without using paper currency? Nairobi is as good a place as any to try in 2016. And while it’s largely doable, but not quite entirely possible, to get around using a mix of cards (credit/debit) and mobile money (i.e. M-Pesa), it also brings up a lot of interesting findings.

What happens when you try not to pay In cash? 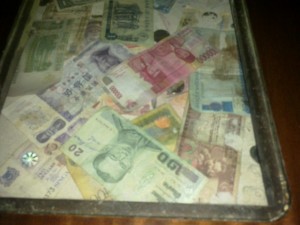 These findings are from about a week and a half I spent, going cashless, and trying not to use any cash. This was for every day buys like meals, parking, groceries, utilities, and newspapers.

This was inspired by a conversation with Lucy Mbabazi who’s a card payment proponent and also by a previous experiment done at KopoKopo (who had an intern try to go 60 days using M-Pesa, in lieu of cash – but I can’t find a link to their post).