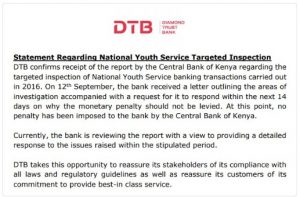 The Central Bank of Kenya (CBK) has published new guidelines to assist Kenyan banks to assess and mitigate the risk that their institutions and systems may be used for money laundering (ML) or terrorism financing (TF).
They risk rules stipulate, among other proposals that:
The guidelines follow an earlier directive on paper bag banking from two years ago. The new ML and TF rules are in draft form and bankers and any interested persons are invited to send comments to the CBK on the proposals before January 31, 2018.

The Central Bank of Kenya (CBK) has sent out new mandatory guidelines to banks to be on the look out for large volumes of cash being transacted over the counter. The notice targets customers who withdraw or deposit cash amounts of Kshs 1 million (~$10,000) or above.

It requires banks to get more information about why their customers are depositing or withdrawing these large sums of cash and query (among other things):

The guidelines are drawn from existing crime and anti-money laundering regulations, and come after other attempts in the past to target money laundering, corruption, terrorism, or crime funds being transferred through mobile phones or remittances / hawala. But it seems, there’s been a realization, probably after investigations into the NYS saga, that cash was moved between banks in paper bags.

In Kenya, large sums (over Kshs 1 million)  are meant to be transferred through electronic funds transfers (EFT) and real-time gross settlement (RTGS). Indeed cheques over Kshs 1 million are not accepted unless they are in support of amounts being transferred between accounts within the same bank.