While the world awaits the release of more cable from Wikileaks, some unfortunate news comes from Kenya where the equivalent of Wikileaks – the anti-corruption watchdog Mars Group Kenya – inexplicably took down their website in mid December.

The reasons for this are unclear, but (via @twitter) it appears it came about when someone tried to create an application to access their vast database – and this provoked the founders to take down the site and post a message that their database and contents therein are copywrited and invited anyone who wanted to use it to e-mail them for permission. 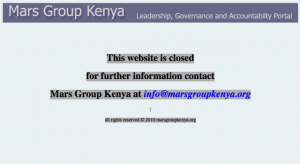 Mars Group Kenya (created by Mwalimu Mati, former Director of Transparency International Kenya) has been a great resource of information for taxpayers, students and analysts looking at corruption. Their site had official and unofficial, unreleased and secret reports of the Kenya government, Kenya parliament and auditors) mainly on corruption in Kenya. Also their budget reports on government spending have come to be appreciated and even caused the Kenya Finance Minister to re-check his numbers going into the 2009 budget.

That was an amazing look at the inner working of the top of Kenya’s finance.