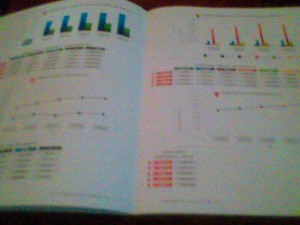 KCB has been rather silent on the Triton matter even as the company’s share price took a mini hit and its profitability outlook was downgraded in some circles.

The last release from their website was in reference to the launch of a Sustainability Report of the group. It’s not online yet, though it will be, an interesting report with lots of rarely disclosed facts on the bank, mostly their corporate social responsibility (CSR) activities, and will be repeated every two years.

in the report
KCB Brand – has a 75% corporate reputation, is the most popular financial brand, and the 4th most popular in Kenya (after Safaricom, Kenya airways and Coca-Cola) according to the Steadman Group.

Corruption & Triton: KCB has zero tolerance to corruption, and has 110 ethics champions trained to combat corruption. Also in 2007, KCB exited from Transparency International (TI) bribery index, it prohibits political contributions (direct or indirect) from bank funds, and is a founder member of Ethical Business Group Kenya. The Report states that 2 staff were dismissed and 9 terminated.

Triton ends well? for KCB: The Triton matter may be a foregone conclusion if the Daily Nation article about an out of court settlement between the Government of Kenya and its financiers (KCB, Fortis, Ecobank, Equatorial banks) is true – and that the government (i.e. taxpayers) may pay the financiers off to not go to court over their funds lost with Trition and the Kenya Pipeline Corporation (KPC). The silence will mean that unsavory happenings at KPC will (maybe) not be exposed further, clearing the way (hopefully) for an IPO of the troubled company.

Titanic Triton
The Central Bank of Kenya has issued a statement to reassure depositors at some banks that have had some panicked customers want to withdraw and safeguard their funds at their banks which they believe may be exposed to the Triton fraud and fall – which CBK says is less than 0.002% of the banking sector. Read more