On Thursday at Strathmore Business School, there was a session to highlight some of the opportunities and challenges for Kenyan companies that wanted to get into the farm export business.

Kenya is known for flower exports, but not so much for fruits and vegetables which can be quite lucrative and are better suited to the climate here. An example was cited that a kilo of dhania (coriander) that sells for Kshs 50 per kilo in Nairobi, can fetch €3-4 euros in Europe.

The Strathmore Business School exploring international markets program class takes place early next year and involves two modules: The first will take the class to the Fruit Logistica in Berlin, in February 2018 which is the world’s leading trade fair for the international fresh produce business where they will learn about the packaging, presentation, logistics, marketing. and other business aspects at the fair that had had 3,000 exhibitors from 84 countries and 76,000 visitors this year. Then at module two in Nairobi, they will learn about local production, logistics, local bank and financial options, obtaining global certification, branding, and other aspects of the food value chain. The deadline for applications is December 20. 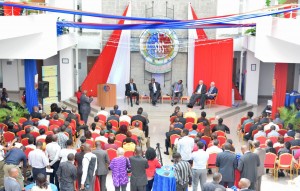