Ghana Cities: Last weekend, in Accra, the Renaissance Group launched two new cities that they plan to represent the future of urbanization in Ghana. The cities will be mixed-use areas where residents will live work and play and are in the same vein as Tatu City that was launched in Kenya, but which has been embroiled in a shareholder court case that has affected the pace of the project. The concept of new cities that Renaissance is planning in Ghana, Kenya (Tatu on 2500 acres for  70,000 people),  Zambia (Roma park) and the Democratic Republic of Congo (Kiswishi on 6900 acres in Lubumbashi to break ground in 2012) are based on some harsh realities:

The two Ghanaian cities are King City (located 10km from Takoradi harbour in North Akase area) which will be built over 10 years in phases to house 90,000 people and Appolonia (located 30km from Accra and 20km from Tema Harbour) which will have retail and commercial developments on 2000 acres to house 88,000 people. Appolonia which is now having water & road development will break ground in 2013.

With both cities, local communities are investing their land in the deal. They are not selling, and remain as equity partners with a stake to get a return on their undeveloped land and create employment for the youth and Renaissance team estimates that Accra itself will need another 5 – 6 cities to absorb its fast growth. Both the cities will have high, medium, and low-cost housing units and as the local mortgage continues to develop, the Renaissance team expect that most people should be able to afford homes. Ghana now has mid-market mortgages accessible over 10 years for about 80,000 Cedi’s (~$40,000 or Kshs 3.3 million).

Garden City: The real estate sector in Nairobi is attracting more PE interest, and Actis’ portfolio includes ten institutional quality assets in seven countries in sub-Saharan Africa. Following in that model, equity firm Actis and partners including Game are to develop Garden City  which will include homes, an events arena, and the largest retail mall in East Africa. It has already attracted MassMart from South Africa and it will break ground in December 2012.

Kisumu Floatel: A project is seeking investors to establish a luxury passenger vessel as a 5-star floating hotel on Lake Victoria that will accommodate 80 passengers.

Cautionary Tale: But sometimes mega projects can go wrong like this ghost city built by Chinese investors in Kilamba, Angola.

Taxation Time: The Kenya Revenue Authority has published some recent notices about taxation of rental income and other income from real estate. While collection of value-added tax (VAT of 16%) has been observed in the commercial building sector, some residential owners have ignored that, while others have not been aware that they are also supposed to pay income tax that graduates from 10% on net rental income of up to ~122,000  to 30% on all rental income over ~Kshs. 466,000 ($5,600). There is also “other” treatment for non-residents, partnerships, estates of deceased landlords and Kenyans living in the diaspora, as well as tax incentives available for rental income on real estate investment trusts (REITs)  and on low-income housing projects (less than $20,000). 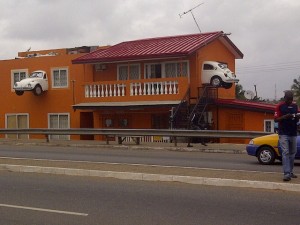 Nairobi Real Estate Price Index: Hass Consult have just released their second-quarter report on housing price trends.  They applauded the recent lowering of the Central Bank CBR rate (to 16.5%) as they noted that the impact of high-interest rates will continue to be seen in a slow down in new building amid the high finance costs. They also noted that, while the pace of building in Nairobi is at a peak, it’s still a fraction of the housing demand, and while projects are coming to fruition, new ones are not being started as people who would be buying homes are instead staying in rental properties longer. The release of the report was sponsored by The Mortgage Company, a mortgage brokerage firm who also released a mortgage rate sheet for consumer comparison and which showed I&M bank had the lowest mortgage rates of 18%, while Equity, CBA and Family Banks had the most expensive at 24%.

Mortgage Chat: The Kenya Bankers Association which is turning 50 this year, just re-branded and launched a new outlook and new website. One of their new outreach programs will be a weekly mychat session with a bank CEO, and in a few weeks, they will feature Frank Ireri, the Managing Director of Housing Finance bank, who will chat about mortgages.TV Time: Finally, there will be a new TV show coming to NTV in Kenya that will be devoted to real estate and will air on Sunday afternoons in a few weeks.

Jeff Koinange has been running a show called Capital Talk on the new K-24 channel in Nairobi. It’s a 1-on-1 interview session, usually with politicians, but occasionally with business leaders. He seems more comfortable hosting these show than he did from say from upriver Nigeria with the rebels on CNN.

Last night he had Maina Mwangi, the CEO of Renaissance Capital, to talk about the future of investment banking in Kenya, impact that the political stalemate is having on the economy, and other issues

Some of Mr. Mwangi’s comments

Worst case scenario: no political solution; and the economy goes into stagflation – nothing happened e.g. the NSE started 2007 at 5,000 and ended at 5,000. He said investment bankers can make money if the economy is going up, or going down, but not where it is stuck/going sideways

Related post: From January, some Renaissance earlier comments on the economy.

Finally, not sure if she’s a banker, but Kenyanentreprenur argues that what Africa needs are development minded dictators since we are not ready for democracy – and I hope we won’t be having this debate in 2012!

My own take is that the people at the Coast, Nyanza, Rift Valley and Western provinces need to start rebuilding their lives and their industries – otherwise they will be left behind. Rioting in your own community is dumb as you destroy businesses that deliver services and create jobs within the community. So pass that message along with any peace & sympathy messages you convey. Also watch NTV’s great Voices of Reason program on Youtube that looks at pre- and post-election issues (more on that later).