There have been two recent attacks which have looked like they were motivated by terrorists, but which now appear to have been linked to investors with issues or seeking gains

There was the deadly attack in Manila, Philippines on a casino and shopping complex that’s now attributed to a heavily indebted Filipino (a, former finance department employee who owed more than $80,000, and had sold off some property) who was hooked on gambling (his family had even asked casinos in the capital to ban him) …authorities released security footage showing Carlos casually exiting a taxi just after midnight and walking calmly into a vast entertainment and gambling complex like any other visitor. Shortly afterward, he dons a black ski mask, slips on an ammunition vest and pulls an M4 carbine assault rifle out of his backpack…at least 37 patrons and employees died, mostly from smoke inhalation as they tried to hide

But more shocking was the bus attack back in April on the team bus of a German soccer team.

Here in Kenya, we don’t have many mass attacks linked to such, but there are numerous stories of people who have taken their lives after gambling losses.

A guest post by @sportskenya about a visit to The Philippines, home to boxing legend Manny Pacquiao, and famous political families – the Aquinos’ and the Marcos’. The Philippines archipelago is a collective of over 7,000 islands, spread over an area of 300,000 sq. kms in South East Asia. Here’s a sneak pic of the island nation through one of its cities, Cebu;

Getting There: I used Etihad Airways which is a 3-leg trip Nairobi-Abu Dhabi; Abu Dhabi-Manila and Manila-Cebu (though on the second & last part of legs to Cebu was through Philippines Airlines (partner of Etihad). The cost of the trip is about US$1,850 per person for a round trip. There was an hour layover in Abu Dhabi going to Cebu, but with 4 hours on the way back, there were no complaints while exploring the duty-free area and beautiful airport…☺. There is also an alternative route via Abu Dhabi to Hong Kong and finally to Cebu at approx. US$ 2,100. 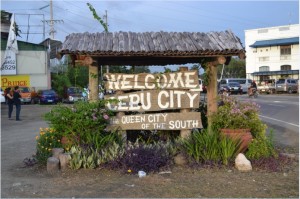 On Arrival: It was fairly easy to go through the Manila Airport as well as Cebu airport. No visa is required from Kenya and a number of other countries. However there is an exit/departure charge of Philippine Pesos (denoted as ₱ or PHP) 300 – 2,700 (US$ 6.7- $60) depending on your travel class i.e. from Economy to First Class – and the fee is charged on every visitor irrespective of country or destination. Interestingly I was put on the Express Lane while leaving Manila airport because I was Black or is it of African origin…which the Immigration office said, was a rare thing (or did I miss the jibe?)

At Cebu, we were welcomed by the local tourism officials who had arranged for a welcoming party for attendees of the Global Voices Summit. Security was tight thanks to the Papal visit a few days before, but nothing overzealous from the security personnel.

Getting Around: The main form of transportation in Cebu are the Jeepneys (the equivalent of matatus in Kenya), which are open and fairly reliable. The charges are subsidized, meaning the Jeepneys can only charge a certain rate even at peak hours. The holding areas for these are also fairly well-organized with long queues forming at peak times. It costs between PHP5 -15 (US$ 0.10-0.35) per person per trip. 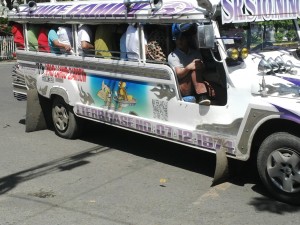 Cab services are also available though slightly pricey since most of these are metered and a standard fee of PHP (₱) 40 is charged by local transport authorities (...don’t know if it’s the same in other cities in the Philippines). Traffic does get heavy as is expected in any city at peak hours, but there are traffic marshals who make it orderly and less stressful of travels.

Cebu is relatively safe and is comparable to the Mombasa of yesteryear. Petty crimes like pickpocketing are also rare though not totally non-existent. I did my usual evening walks every day without any incident.

Where to Stay: We were booked at a business hotel (Harolds’ Hotel) at approximately PHP3400 (approx. US$ 67) per night which can go up to PHP6000 for Executive suites. There is also the Golden Peak which had slightly lower prices at PHP1180 per night. Most hotels are between $100 – 300 USD/night. Power is reliable with few outages, however, one needs to carry a universal plug as most power sockets are 2-hole meaning it was a hassle for those of us who use British standard plugs.

Staying In Touch: Thanks to the Global Summit organizers’, we got SIM cards and free daily airtime. However, the calls are fairly expensive especially international calls as well as for data. The infrastructure has been largely GSM and 3G in Cebu (though 3G is more prevalent in Manila). You can purchase a SIM card easily for about PHP100 (US$ 2.20) for the SIM card and some airtime at PHP100, 300 or 500 etc. Calls are at US$0.40 per minute, while data is expensive to use on the SIM and phone calls cost more than they do in Kenya. The issue is due to the spread of the islands which makes network tower investments expensive. Fibre optics cables are being laid in parts of Cebu as I could see from freshly dug trenches on some pavements and walking areas.

Cebu was also the landing spot for the country’s Internet through cable laid in the port city in 1995. However, authorities have only recently upgraded the infrastructure to fibre optics in a bid to organize the normally slow Internet and communications links.

Shopping & Sight-Seeing: Most Cebu speak Cebuano – the 2nd most spoken language in The Philippines which  comprises a mix of Spanish, Malay and a bit of English from the US. One can get through by speaking English, though on back streets one may need to get a local to accompany you, especially if buying items (for haggling purposes). There are quite a number of major malls in Cebu which explains the US cultural influence, and major US brands such as McDonald’s, Starbucks, among others, are big here. 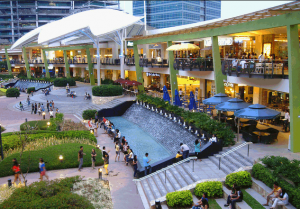 Cebu is mainly a tourist city and also a port hub for this part of the Philippines. Historically the town was the point of entry for Spanish explorers including the famous Ferdinand Magellan who met  his death here. This was at the Battle of Mactan under the hands of Lapu-Lapu – a native ruler who became a hero for his resistance. The Spanish heritage is rich in the architectural and street designs as well as some of the words in the Cebuano language and naming too. However not as much Spanish is spoken as would be expected.

The city has beautiful beaches and for those with an interest in marine life and nature trails, there is quite a variety of things to choose from. From walks at the scenic Chocolate Hills to bathing in the beaches of Logon beach Malapascua. It also has some beautiful historic sites such as Capitol Hill (venue of GV Summit), Magellan’s Cross among others.

Eating Out: Filipinos love their meat and have a certain fascination for pork. I sampled mostly red and white meats; from beef to pork and chicken. Local dishes include tapa – cured beef; abodo – chicken or beef in some garlic and soy sauce; hamonado – pork in some pineapple sauce (almost like Hawaiian pizza but richer servings…) among others.

As far as seafood goes, I chose to play safe lest I pick reactions or trigger any allergies. But for all you seafood lovers, the sushi and octopus stew as well as other delicacies are in plenty. Interestingly I managed to sample a Chinese eatery which was quite busy in one of the many malls. The meals prices ranged from PHP150 to PHP450 on the higher end for a single meal (and therefore PHP300-900 for a double).

As for beer and other alcoholic drinks, the Cebuanos love their alcohol and would walk around meeting many going to make merry or having a good time. There are no Mututho laws here! They have some potent beer which retails at between PHP55 to PHP 80, depending on your choice of club. There is an interesting beer brand by the name, Beer Na Beer (almost thought there are Swahili people here too). Other brands include the potent Red Horse (which also comes in a large 1-litre bottle) and San Miguel. I usually opted for the Cali, a non-alcoholic brand or fresh juice (…teetotaler habits…). Filipinos also love clubbing with a number of clubs hosting international DJs during our stay as some were on holiday but mixing it up with some work. Their love for karaoke though was always one to behold.

Did You Know? The country was colonized by Buddhists, Hindus, Muslims, and Spaniards for over 400 years who left them the architectural heritage and bits of words in Spanish. They also left behind the Catholic religion of which 85% of the population of over 100 million are followers. This trip came after the first papal visit by Pope Francis, who like most of his modern-day predecessors, has to make the pilgrimage to this island state.

The Philippines name is a tribute to King Philip the II from Spain – of the 16th Century – who was a devout Catholic who established the first trans-Pacific trade route between Asia and Americas. The Americans who are their ‘latter-day occupants’ left more than that with the language, the road network, the love for anything consumerist and a largely capitalist state. After the overthrow of Ferdinand Marcos in 1986, the country embraced the Aquinos who have now managed to get a stronghold of the country’s political psyche.

Cebu is a perfect honeymoon location especially around Jan-Mar of the year when temperatures are said to be cooler than usual (between 24-27 degrees). In the summer these can rise to a high of 33-36 degrees with humid conditions given the large water masses around. All in all, a fascinating city which I’d recommend to visit beyond your more storied Manila.