excerpts from the last ½ of the meeting

Q&A leading into the 2009 AGM, Olympia shareholders had many questions revolving around the companies investment strategy, governance issues, disastrous foray into South Africa and prospects of escaping an Uchumi like future as the AGM was postponed, and happened a week later than scheduled.

Governance: – the AGM was delayed, the Board said, because the annual accounts were late coming out; one shareholder urged them to do better, not aim for the minimum corporate of 21 days only to avoid being late and incurring regulator penalties. CEO (Michael Matu) said they had noted this and had improved to the extent that the ½ year accounts were released in September, just over month after completion of period.
(lacking) corporate governance (missed this part where the auditor read out a statement that the company had no corporate governance in place. The auditor apparently made a similar remark last AGM, but that was omitted from the minutes of the meeting presented today – the directors mentioned they have engaged consultants and were embarking on corporate governance measures. One shareholder noted that the board had promised the same last year and no piece meal measures have been implemented to which the directors said they were doing this now and would brief shareholder in about two months
director loans increasing each year amount to 18.3 million – who, for what, what terms? CEO said he’s the only director and he has borrowed to buy house and car. Loan interest is paid and assets are charged to the company
insider board: One shareholder complained that 5 of the 7 directors had links to the parent company, so board was not truly independent
investor briefing -one shareholder presented the directors with a list of 35 detailed questions. The chairman suggested they have an investor briefing in about two months where all these and other shareholder questions can be exhaustively answered it will not be an EGM. CEO also promised to reply to all these questions via e-mail to the shareholder and copy his replies to the Capital Markets Authority whose representatives were in attendance
– at that time, the directors all also explain what measures they have taken in the area of corporate governance

Strategy Going Forward – For SADC (southern Africa) Olympia is still keen on the building materials market which is still strong. Even plan to go back into South Africa but without a link to Builders Warehouse – who handled 75% of their sales. They hope to revive and relocate the Natwood business to Botswana (Gaborone) from South Africa from where it will be easier and cheaper to supply their core markets in the Gauteng region (transport distances will halve from 600km to 300km)
– now going into Zambia on a smaller scale, and will look at Zimbabwe since economy is more attractive after dollarization
– part of problem was they did not make the management changes that they hoped to make; hire right people

Investments – Dunlop is profitable this half year, though had not yet installed new plant they bought to replace their exiting 1970’s plant. However with what they know from the Botswana tiles operation, they know how they can multiply their products & sales in Kenya with Dunlop once new plant is installed. From Botswana they supply South Africa, Zimbabwe, Angola Nigeria and Mozambique. Answering a separate shareholder question, mentioned that factory land had been given to Dunlop to support their balance sheet, but transfer had not been effected since they were awaiting confirmation that there would be no stamp duty to be paid on deal
– Mather & Platt, they bought out centum’s shareholding, but are yet to beef up the management there
– A shareholder (who was transaction adviser on the rights issue of 2007) said he was surprised to see how share transfers were disclosed in 2009 accounts. CEO said that at the time of rights issue, shares were allocated pending investments later made. E.g. Olympia had no cash to take up Heri rights issue, but Avon advanced Olympia cash against balance sheet . In answering a similar question CEO said of their strategy – when they see opportunities, but have no cash they arrange for third party to buy shares and agree to re-sell them to Olympia at later date
– No due diligence in describing Natwood investment, CEO had mentioned that they paid ½ the funds but later their due diligence showed that there were come issues within the company and a shareholder questioned if any initial due diligence was done at all. CEO explained that if company went after blue chip companies, they would pay premium prices, but they chose to go after viable but distressed companies and in this case they had consulted advisers and lawyers before natwood deal.

Shareholder votes – One director was re-elected, but COO Mwangi Wamae opted out of re-election to the board.
– ESOP though directors said employee share options plan (ESOP) will be a key tool to attract top managers for the various companies, shareholders voiced concern that this was the wrong time to bring up an ESOP, with the board governance not in place. Directors argue that the ESOP approval was separate from the implementation noting that – they have had an ESOP in Botswana for 3 years with no shares issued, and that the CMA (Kenya) would not be discuss and approve an ESOP unless shareholders had approved it. Since this was a formality it was approved.
– A dividend of 10 cents was approved. Chairman joked that this was the same as Safaricom was paying

Summary: Olympia CEO and Board pulled it off (again) – reassuring shareholders that the company was sound, strategy & governance would improve, they had a plan to take it forward and that the worst (of the SA foray) was behind them now. 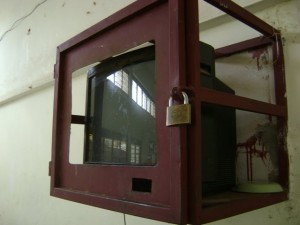 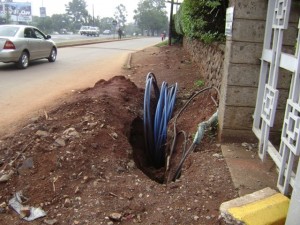 Holding company – Olympia Capital’s annual report is one of the most jumbled I have seen in a while – it has contradictory statements, dates overlap, and profit/loss amounts that may have led to some regulatory trouble in Botswana where the company was also listed. 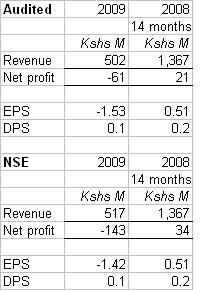 recap
Performance: their accounts were qualified accounts by the audit firm DCDM who noted that the company did not comply with IFRS – where they should have consolidated a subsidiary (Plush – to be liquidated) in their accounts; the auditors however added that this omission did not have a material effect on the performance numbers since Olympia wrote off all related amounts

Disastrous SA investments
capping a disastrous foray into South Africa – whose dismal results the directors blame on the recession in that country
– owned 74% of Plush products limited which ceased business and will be liquidated as their bankers (Nedbank) moved in – the SA equivalent of a receivership?. Olympia wrote off Kshs. 103 million from Plush – 86 million investment and 17 million in loans
– With another company, Natural wooden products, they expected to buy (and who they lent money), but this will not materialize; they don’t expect to recover monies and have provided for it in full
– another one Natwood owes 63 million
– The report notes that Olympia provided a total of Kshs. 115 million for SA investments that have not contributed to profits since investment while the elsewhere is a note that discontinued SA operations will cost Kshs. 200 million

Investment/subsidiaries
– own 12.5% Heri investments (valued at 71.6) million and mentioned they got a good dividend, thought its unclear how much was received
– A subsidiary, Dunlop, bought a tile making plant at a cost of 54 million – but it has not been installed – and the company may have to get a third party to install or operate it – or may even have sell the plant!
– Owned 7 million worth of Safaricom shares at year end

Other
– Some directors & top shareholders have reduced their shareholding
– There are so many internal deals /within-the group based on valuations or estimated of directors
– There are no director profiles in report
– Corporate governance: Olympia created two board committees audit & nomination, and investments committee – but these did not meet during the year (this company needs a competent independent investments committee after its SA foray!)

Upcoming AGM
should be interesting to attend
– The AGM will be held on 25th September
– Auditors signed accounts on July 31, but the reports have been sent to (2,685) shareholders just two weeks before meeting
– Shareholders will be asked to approve a dividend at a critical time for the company (Olympia will pay out Kshs 4 million)
– Bad timing for the directors to ask shareholders to approve creation of an employee share option plan (ESOP), fund it, appoint trustees, issue shares etc.
– Increase share capital from 40 million to 50 million by creating 10 million new shares of 5/= each – this adds up to an additional 50, not 10 million!
– DCDM will continue as auditors.

For the first time in years, Olympia has received clean statements from their auditors (DCDM) and the company resumes paying a dividend of this year of Kshs. 0.20 per share.

Also Paul Wanderi Ndungu, a lawyer who made a windfall with Kenya Airways shares, and is now Olympia’s second largest shareholder with 12.25% behind Dunlop properties, has joined the Olympia Board this year along with John Simba.

The company will also take a majority shareholding in Avon Limited, and Mather & Platt in addition to increasing investment in Heri Limited. But its attachment to Kenya is miniscule with just 5% of revenue from here (95% was from Botswana – up from 85%)