Discovering Thika road: Took a road trip up Thika Road to hang with the Kuweni Serious crew last weekend. Chinese contractors are converting the road into a super highway and the dramatic transformation (follow Thika Road blog ) has plenty of soil hills, deep valleys, closed roads, missing roundabouts etc. It was a fun trip, but as it is said every day, don’t drive on Thika Road if you’re a stranger, or it’s dark, or the road is wet.

The journey is made more dangerous by Matatu’s and some road regulars who make their way anywhere they see fit – by driving in the wrong land, making U-turns in traffic, over-lapping patient motorists etc. 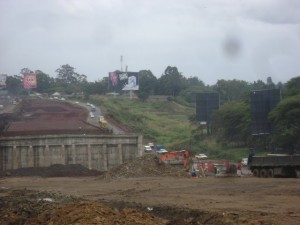 The highway defies belief, and when it’s done it will probably need other roads to be closed off or expanded. e.g Outer Ring Road and a bypass to Mombasa Road. The large volumes of traffic need to enter and exit cleanly and without delay otherwise there will be more situations like the one at Riverside Drive and (current) Museum Hill Roundabout where traffic waiting to enter these smaller roads spills over backwards onto the large highway causing more jams.

The on-going rains make it more difficult and with all the un-drained water, some cars are probably washed daily only to end up covered in red mud. For users of public vehicles, the rains mean added journey times and increased fares on Matauts.

More Commuter Trains: However there is some relief for commuters who live along Thika Road since Rift Valley Railways (RVR) has upped the number of daily consumer trains in Nairobi from 8 to 18 which collectively serve Kahawa, Dandora, Embakasi, Ruiru, Kikuyu, and Kitengela/Athi River

The addition of the early morning trains has slashed some commuters’ fares by almost 2/3 e.g. some Embakasi residents who take the train paying Kshs 30/- per trip compared to the previous Kshs 70 – 100 per trip by Matatu. Also, the train is more dependable, and takes 25 minutes to complete the journey, unlike driving in a car or matatu, which usually takes over an hour in ‘rush hour’. 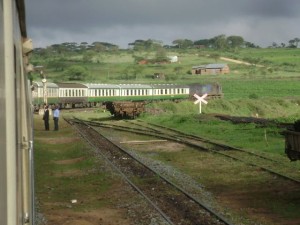 Ultimately having dependable train travel may lessen the burden on the roads (fewer Vitz card) and while there is talk of having a train to Jomo Kenyatta Airport, it is not a government priority or feasible in the short to medium term.

Commuter trains aside, the reason that the concessionaire, Egypt’s Citadel (operating as Kenya Uganda Railway Holdings) invested was for cargo and the train transport while significantly cheaper than the Kshs 120,000 ($1,500) to transport a container by lorry from Mombasa to Nairobi ($3,600 for Mombasa to Kampala) needs to emphasize this aspect and demonstrate more reliability to business owners. This will relieve the burden on the roads.

Oil Shipment: As the international price of oil is expected to go up owing to instability in the Middle East, in Kenya there is a small dispute between oil companies led by Shell and Kenol pitted against NOCK – National Oil Corporation (NOCK), a Kenya government state agency that imported the latest shipment of diesel on behalf of all the oil companies. After some postponed arrival delays, and tales of missing phantom ships [MT Volga, MT Adden, MT Ratna Sheruti, MT Ratan Namrata], which resulted in a partial cancelation by Shell, a shipment finally arrived on March 1.

However that did not put the matter to rest since NOCK has announced that they would bill the oil companies using the higher March prices instead of the February price. And where is the diesel? NOCK says it has all been sold, but the other oil companies say they have not bought it, and won’t be buying it owing to the higher price being demanded.

Fuel Relief: Some slight relief for motorists comes from Kenol who have discounted the price of petrol and diesel by 2 shillings on Tuesdays and Fridays – so petrol today costs about Kshs 100 (~$5.30/gallon) under Deal Poa promotion, and for holders of Kenol corporate fuel cards, they enjoy a 2 shilling discount every day, which doubles to Kshs 4 on Tuesday and Friday 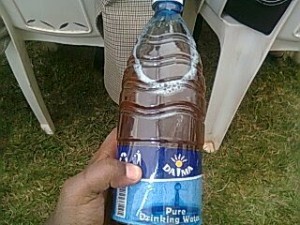 In Car Beverage: My current in-car beverage is Nestea iced tea that you can make in a supermarket. How? (i) Buy a Kshs 20 Nestea satchet (ii) Buy a one litre bottled water for Kshs 40 – 60 (any brand) (iii) pour the sachet contents in the bottle & shake (iv) you have a litre of iced tea for less than $1.