The Chevrolet TrailBlazer that is being used to support for the Tembea Kenya Maina Kageni Road Trip Tour is a 2015 model, new vehicle, that General Motors is showcasing around the country. In line with the current Chevrolet theme of finding new roads, the Trail Blazer caravan has been to many place likes Lamu, Lukenya, Amboseli, Nyeri, Baringo, Nakuru.

And while new highways and roads are built around the Kenya, the reality is that there are many parts of the country still unpaved and road maintenance is poor as it’s only done every few years. This means that drivers  often encounter potholes, mud, wet roads, and high bumps in Nairobi and other towns all the time, and a tough vehicle with a high clearance is ideal.

Chevrolet is a strong brand world-wide for GM which remains the USA’s largest auto maker with 18% in 2015. In Kenya, General Motors East Africa (GMEA), was started in 1975 as a joint venture between the Government of Kenya and General Motors Company, and is one that is currently 18% owned by Centum, and which is a leading exporter of new vehicles to countries in the greater East Africa region.

And while, in Kenya, it seems that every other car is a Toyota, GMEA is actually leading supplier of new vehicles into the Kenya market with about 6,700 new vehicles (33%) supplied in 2015. GMEA  assembles, markets and sells Chevrolet, Opel and Isuzu vehicles and parts in Kenya and the Eastern Africa region. In Kenya, their Isuzu brand is strong, dominating the bus, truck, and pickup market, but they don’t want to rest on their laurels – hence the introduction of the Chevrolet Trailblazer in the growing SUV category.

The 2.8 litre diesel, automatic model Chevrolet Trailblazer used in the Tembea Kenya campaign retails for about Kshs 5.1 million ($50,000) [but can be had for much less for embassies and government offices who don’t have to pay Kenya’s hefty new vehicle taxes].

The Trail Blazer is available in 8 different colours, and has 7 seats spread over three rows. Some of the nice features it has include individual overhead lights & A/C setting for each row, side steps, leather seats, rearview view camera with parking assist (useful at Nairobi malls), anti-theft /  immobilizer system,  a touch screen infotainment system that links to the phones via bluetooth or USB,  multiple, charing ports, steering wheel controls, and two setting of four-wheels drive (4WD) that the driver can adjust by simply twisting a knob. 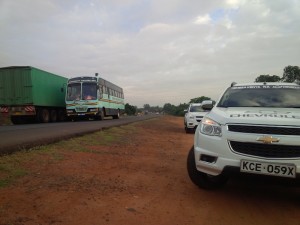 Last week, GMEA signed a deal with Kenya’s leading asset financier, NIC Bank, to enable buyers of Chevrolet and Isuzu vehicles to get up to 95%, at an interest rate if 15.5% which can be repaid over 6 years . This promotion lasts till end of March 2016 and is available at all GMEA locations across the country.x

ABC Bank
– Head of liability management & institutional banking
– Liability relationship managers (3 in Nairobi, 1 at Mombasa)
Apply by May 25 to hr@abcthebank.com.

Fundraising and PR officer at AMREF. Apply to jobs@amrefhq.org by 24 May.

Chief accountant at CGB Foods. Apply to the HRM at info@cgbfoods.com

Investment analyst at ICEA Investment Services. Apply to the managing director 46143-00100 Nairobi by 18 May.

Finance & administration officer at Independent Medico – Legal unit. Details at www.imiu.org and deadline is 19 May.

Chief financial officer at Precision Air, Tanzania. Apply through PWC at pwrecruit@precisionairtz.com by May 26.

Sales, finance, and marketing management trainees at Reckitt Benckiser. Apply to hr.rbea@reckittbenckiser.com by May 19.

Micro-finance coordinator at SCC-Vi Eastern Africa. Apply to jobs@scckenya.or.ke by 26 May.

The Ministry of Finance to identify and devise ways of eliminating all state corporation (parstatal)-related contingent liabilities. D/L is June 7.

Various at the Nile Basin Initiative. D/L is June 14.

Education
The Higher Education Loans Board is providing loans & scholarships for study in Kenya during the 2006 – 07 academic year.

Housing
The National Housing Corporation is selling 600 flats at Madaraka Estate in Nairobi, comprising 192 2 bedroom flat at 1.6 million shillings, and 408 3 bedroom flats at 2 million. Further enquiries can be made to the secretariat, Madaraka sale committee P O Box 30257-00100 Nairobi. Forms are available at a non-refundable 1,000 shilling fee from NHC and should be returned with 10% deposit in bankers cheque by 10 July.

Current tenants say the apartments have been over-valued and are also protesting the short period of time they are being asked to raise money for buy houses they have lived in and paid for, some for the last 30 years.

ICICI, India’s largest private bank (and 2nd overall) plans to open a representative office in Kenya within the next few months. It has been called India’s most aggressive bank, with a strong corporate banking operation, and is also that country’s largest issuer of credit cards. ICICI’s arrival into Kenya comes after the State Bank of India’s takeover of Giro Bank last year.