At the IBM Research Africa Lab in Nairobi today, there was a briefing before a US Trade delegation on the upcoming visit by US President Obama.

Kamal Bhattacharya, the Vice president – IBM research Africa, said the Lab is IBM’s only commercial research lab on the African continent (opened in 2013), and only the 12th research lab (in 70 years). Research has been a part of almost every technology leap and they have 50 researchers in Nairobi (half of who are women), some from diaspora, and some from local top schools, who now make Kenya their home. In two years between 100 and 150 students have passed through the Lab and they plan to create a leadership academy that will have a masters online course in partnership with  Georgia Tech for the top students.

The Lab currently focuses on financial inclusion, energy, water & agriculture, healthcare, and education. Kamal said the biggest opportunity in Africa is around data, and there’s little insight into how things work (or don’t!) because not enough data is collected. There are 15 million farmers in Kenya and still not much is known about their daily work and the challenges they face, so IBM is building tech that can measure these things and engage them with urban entrepreneurs and connect them to market opportunities.

There were some side demonstrations of some projects that IBM Research teams are working on.

The first was on traffic mobility.  Nairobi loses a colossal amount in traffic per day and an IBM study found it the 4th most-stressful city for drivers (after Mexico City, Shenzhen and Beijing). The team is doing research to sense how drivers react and vehicles behave as they negotiate typical obstacles on a Nairobi street such as potholes, and bumps of varying sizes.

Also, the Nairobi City County Government is working with IBM Research Africa to improve the efficiency of their solid waste collection fleet. Some trucks were fitted with smart devices and officials are able to monitor, in real-time, speed, location, fuel consumption etc. Since the partnership started, the government has gone from collecting 800 tons to 1,400 tons of solid waste a day and they have learn a lot more about their vehicle operation, traffic patterns, and the state of the roads. 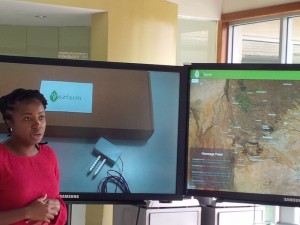 Another research project was on Ez-Farm water management for agriculture. Many of today’s farmers are people, called telephone farmers, who are motivated, moneyed, and keen people (like bank managers or teachers) who want to invest and succeed in agriculture, but who reside in cities (not on their farms) and need better reports on inputs & operations – and water usage is one of the most important elements in a farms’ success.

The Lab is running a pilot program with several farmers (there’s a long list of people want to sign up with IBM). Ultimately, when there’s a poor harvest or crops failure at a farm, or other challenges (brown stains on tomato which indicate stress during production), many farmers are not sure if it is due to water, soil, fertilizer, disease or other cause. Some of the sensors they are using on the test farms  are water tank sensors and soil moisture sensors. Later on, they plan to link with Kenya’s Meteorological Service to build in rainfall patterns and predictions into an eventual app. 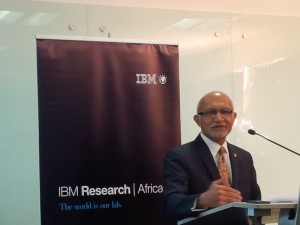 The IBM Research demos were done for the delegation led by Assistant Secretary Arun Kumar, that has been to Mozambique, South Africa, and now Kenya. On the upcoming Global Entrepreneurship Summit (GES), they couldn’t give much detail, but that it’s going to be big. The genesis of having the GES in Africa actually comes from President Obama’s 2009 speech in Cairo (which may have also triggered other events).

That led to a shifting in the aid to trade paradigm and a push for more regional trade/intra-Africa, and Kenya is leader in the East African Community. The US President will lead a 1,200 strong delegation with the Secretary of Commerce and entrepreneurs, and business leaders in education, government etc.

Kumar said that systems and analytics being developed at IBM Research to drive around potholes will also have uses in many other cities, beyond Nairobi.

You (the public) are invited to comment/recommend which of the 1,300+ licences required of businesses in Kenya should be deleted or simplified. E-mail your views to licenses@tradeandindustry.go.ke by December 2 and a complete list of licenses can be accessed on page 5 of this link.

Start a Bank in Kenya
The Central Bank of Kenya has published an updated list of new prudential guidelines that cover the licensing of banks and which ensure that depositors funds are safeguarded.

High flyer
Here’s a summary of a 2004 report which ranked Kenya Airways as the 7th most profitable airline in the world. An extensive report on KQ’s recent performance appeared (amid the referendum dust) in the Nation on Tuesday.

New court
In an update to the residents lawsuit against the Nairobi City Council, a valuation court has now been set up to hear objections in about 8,500 cases raised by tax payers to the new rates. It was quietly gazetted by the Minister for Local Government in September, comprises 10 members (10 members – 3 lawyers, 4 valuers, 3 professionals) and will begin sitting from December 6th at City Hall, Nairobi.

Country manager at Africa Now (enterprising solutions) based in Kisumu. Apply by December 2 at info@africanow.org and check for further details at their site.

Paralegals – 13 positions at the Legal Resources Foundation Trust (LRF), to work at prisons in Nairobi, Thika, Kitale, Nakuru, Kisumu and Meru for 6 months beginning in January ‘06. Applicants should have certificate in paralegal/human rights training from a reputable institution, diploma in community development or social work and at least one year’s experience in community or social work, among others. Apply to info@lrfkenya.org by November 25.