KCB has relaunched KCB M-Pesa loans, small value short-term loan product, with zero interest option along with allowing customers to top-up to their current outstanding loans and roll over loans past the one month.

KCB M-Pesa was launched back in March 2015 in partnership with Safaricom, and they are available from the Safaricom SIM toolkit.  The re-launch came after the migration of the service on to a new platform in partnership with Huawei that will process transactions faster and which is more stable.

KCB CEO Joshua Oigara said that the bank was disbursing Kshs 7 billion worth of loans through mobile, an amount that used to be disbursed over six months at their traditional branches. He announced that the platform improved would bring three new changes to the loan product namely; automatic roll forward of loans if a customer was not able to repay in thirty days, customers could not top-up loan until they reach their credit limits(previously they had to repay an existing loan, in order to qualify for a new ones) and customers will pay zero percent (0%) loan interest if they repay loans on the same day. The zero interest loan offer runs from December 18, 2018, to 17 January 2019 and during this period, customers will be able to enjoy one interest-free loan per week as long as the loan is repaid by midnight of the same day.

It took decades for Kenya to get to 4 million bank accounts and in the last 11 years since M-Pesa, it has gone to over 40 million, half on mobile – @bobcollymore #KCBMpesaUsitense pic.twitter.com/CbhH3V2SUS

Also present at the launch were CEO of Safaricom, Bob Collymore, and Kenya’s Cabinet Secretary for ICT, Joe Mucheru.

Huawei has launched its Mate 10, a premium phone in Kenya in conjunction with e-commerce platform Jumia. The company which now sells 140 million phones a year, and aims to power past Samsung and Apple in the global phone sales race, has been in Kenya for 19 years powering base-stations, communications, surveillance, and fibre networks, devices and systems including M-Pesa and will next do intelligent traffic lights starting in Nairobi.

Huwaei’s traditions of innovation, research, engineering, patents and new technology are all seen in the Huawei Mate 10 which is compact than its Mate 9 predecessor, but with the same screen size. The Huawei Mate 10 runs on Android 8.0 and is powered by the Kirin 970, a powerful Huawei-made chipset which enables the artificial intelligence (AI) capabilities for the phone to study the phone user’s habits, and predicts future usage and allocates phone resources to enhance the user experience.

The AI also allows real-time translation on the phone, by voice or of documents, by taking a picture (e.g. of a page of Chinese text) of 50 languages (and counting). This happens on the phone, not in the cloud, and this provides better privacy & security for the user, minimizes data usage and is faster. Huawei has a partnership with camera maker Leica that has seen them enhance photography capabilities; e.g. the Mate 10 camera recognizes millions of images of people, scenes and objects like food being photographed and optimizes the settings to produce better pictures from the combination of two 20X and 12X cameras.

For practical use in many markets, the Mate 10 is a dual SIM phone capable of holding two 4G SIM cards, and the new powerful battery will easily last two days with normal use despite the large screen and fast processing speeds – and a quick charge of the phone for just 20 minutes should be enough to get a full day of use. The Mate 10 has a curved back for easy grip and is spill and dust resistant.

The Mate 10 can be plugged into a screen to work like a desktop for the user to make edits and show items like demos and presentations right from the phone. The split-screen allows true multitasking of functions and the user can still take calls or check social media while working on other projects.

The Mate 10 phone is now available exclusively on Jumia for Kshs 79,999  (~$775) and for the Black Friday sale period, Jumia is offering a free power bank and a Kshs 2,000 shopper voucher. In the coming weeks, there will be more variants of the Mate 10 offered on Jumia, at Safaricom shops and the open market including the Mate 10 Lite phone that will retail for about $500. 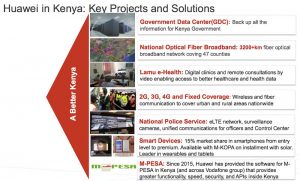