Last Friday, there was a bold tweet by the CEO of Sportpesa announcing the return of the company to full business, with partnerships for sports development to follow.

This comes after a crackdown last year crackdown on gambling companies through a moral push, taxation claims and difficulties renewing licenses, which all led many of the top betting companies to scale back their sponsorships and operations.

But the announcement, just as the English and European soccer leagues that are popular with betting punters get into gear, was followed by a surprising turn of events.

The following morning, the Chairman of the Betting Control and Licensing Board had a press conference and issued a statement about information that Sportpesa Global had granted to Milestone Games permission to operate as ‘Sportpesa’. It went on to say that had licensed Milestone to operate in the country, but asserted that Sportpesa is owned by Pevans East Africa and that no other company can use its name brand, domains and mobile phone shortcodes – asked directed Milestone to use its own website.

Then over the weekend, one of the other Sportpesa shareholders, Paul Wanderi Ndung’u also released a statement on behalf of Kenyan shareholders of Sportpesa and said he had been unaware of the developments with Milestone. He also made some serious claims about the company:

On the last Saturday of September 2019, top sports betting companies, Sportpesa and Betin, separately announced an effective end of their operations in Kenya.

Sportpesa posted a statement on their site saying that Kenyan tax administrators had misunderstood revenue generation in the betting industry  – and that the company would halt all brand operations in Kenya as a result. Earlier, Sportpesa management, without citing  numbers, had said that they had settled all matters with Kenya Revenue Authority (KRA), but have still been unable to obtain renewal of their license from the Betting Control and Licensing Board (BCLB)

Thank you or your suggestion. It is well received. Until such time that adequate taxation and non-hostile regulatory environment is returned, the SportPesa brand will halt operations in Kenya._CM

Then last week on Wednesday, Sportpesa moved to lay off about 400 employees.

So today SportPesa management had to tell its staff what has been the inevitable for the last 3 months – the centre can't holder any longer. Massive grief seeing this entire team rendered jobless by ridiculous policies of our beloved government. #SaveMyJob pic.twitter.com/FizLR3HkGL

Meanwhile, Gamcode (trading as Betin Kenya) also issued a memo to all employees terminating their jobs as the company had not been operating since July 2019. They said they had been trying to resolve for three month’s as such all jobs would end on October 31. 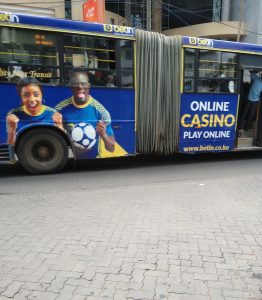 Betin had several big media campaigns with Kenyan soccer star McDonald Mariga, who has unexpectedly stepped into politics and is now in the middle of campaigns to take up the vacant Parliamentary seat for Kibra constituency, following the death of popular MP, Ken Okoth.

By now, with the English Premier League on, local sports pages would have full-page colour advertisements of weekend and mid-week match betting odds and jackpot opportunities. Sportpesa also had significant spending in Europe sponsoring the Racing Point Formula One  team and Everton in the UK premier league and those teams still adorn  Sportpesa brands.

The claims of banning sports betting have been varied, with their destructive influence on young Kenyans, tax evasion and money laundering at different forums. Even a former Chairman of the Betting Control and Licensing Board, Kimani Kung’u, questioned whether non-payment and non-compliance with taxes was behind the freeze on the top betting companies.

In an interview with Radio Jambo in July, Kung’u said that the revenue of betting companies at the end of 2018 was between Sh20 billion and Sh25 billion and that there is no way that could have risen to Sh200 billion by mid-2019.

None of the relicensed firms appears, so far, to have the impact and reach of Betin and Sportpesa.

Winners from the shutdown:

Losers from the shutdown include:

Betin Kenya released a statement, saying that they, as a company, were fully tax-compliant, and that the betting industry had collectively paid Kshs 10 billon ($100 million) in taxes in 2018, but that the government had refused to renew its license, causing it to lay off its staff and shut down its retail outlets.

Betway announced a three year sponsorship of a soccer tournament that will feature 48 teams.

The Kenya Rugby Union held its annual general meeting on March 20. On the agenda too was the election of officials, including a new Chairman.

We're now counting down hours to the KRU Chairmanship Election!!
Who's your pick for the next chairman? #krudecides #BambaSport pic.twitter.com/Vry3IB2VG1

Officially called the Kenya Rugby Football Union (KRU)  the AGM came after a tough year, for the sport. Kenya does relatively well in international rugby, with its colourful ‘Sevens’ team featured on television broadcasts and with a loyal fan following around the world. The sevens team is currently ranked number 14 (after finishing number 8 in 2018)  and sometimes features Collins Injera, the all-time top try scorer.

But the team and the sport is rankled with management and funding issues, and while some corporations have supported different rugby series, competitions, and programs, there are still issues of team selection, coaching support and player welfares. During one series in Paris, the sevens team covered up logo of their shirt-sponsor, Brand Kenya, in protest over not receiving their allowances by the time they started their matches, and that drew the wrath of Kenya’s Tourism Minister, Najib Balala, who angrily cancelled their sponsorship contract, only to reinstate it a few days later.

AGM: The meeting was held after members overruled a request from the Government for them to postpone the AGM. The financial accounts of the Kenya Rugby Football Union (KRU), audited by PFK auditors, were shared with members at the meeting.

The KRU AGM is currently ongoing and the Annual Report as well as the Financial Accounts have been shared with the delegates. #KRUDecides

What do they tell us about the state of rugby?

#KRUdecides: Financial Statements queried on revenue from merchandise and the amounts invested back to Rugby. Figures don't really highlight the people thru the gate. #KeepItFanatic

The annual competition income included 35M from Radio Africa and 9M  from Stanbic. East African Breweries donated 24M and 15M in 2018 and 2017 respectively while tickets sales in both years were 5.5M and 11.6M respectively.

Of the national squad income in 2017, 97% of that (Kshs 113 million) came from Sportpesa, who later withdrew all sponsorships in protest at the Government increasing taxes on sport betting companies.  The 2018 income was more balanced, with Kshs 52M from the Government, and 20M from Brand Kenya as, to their credit, the Government fulfilled a pledge, at least for rugby, to plug the hole left by the Sportpesa departure.

In 2018, they also got 18M from Bidco, and enjoyed use of a vehicle that was donated by Toyota Kenya and containers from Bollore Logistics. Sponsorship income in 2017 included Kshs 20M from Wananchi (Zuku), Tatu City 5M, 4M from Bidco and a 2M bonus payment from Sportpesa

Expenses: In 2018, Kshs 132 million was spent on national squad operations (comprising 65M for the sevens team and 57M for the 15’s team), and 38M on competitions (comprising 10M each for club subsidy and the Safari Sevens tournament, and 8M each for international matches and the national sevens circuit). On rugby development, 10M was spent while 40M went towards administrative expenses (including 21M of salaries and 6M million on marketing and agency – which was down from 20M in 2017).

Overall: The Kenya Rugby Football Union (KRU) took in Kshs 227 million in 2018 and spent the same amount to end with a Kshs 527,104 surplus. The year before it took in 212 million and spent 247 million, resulting in a deficit of Kshs 36 million.

KRU has an accumulated deficit of Kshs 61 million, on its balance sheet with current liabilities of Kshs 120 million far greater than its current assets of Kshs 47 million. KRU had a negative bank position of minus 1.9M in 2018 (comprising a cash balance of Kshs 661,822 and overdraft of 2.5 million. They are owed 47M in receivables but owe 118M in trade payables (62M) and accruals of (50M)

#KRUdecides: From the financials the revenues and cashflows are not stable enough to plough it back to the game. Aroni(Treasure) #KeepItFanatic

These items were flagged by the auditors who also noted that KRU does not have a tax exemption certificate and the Society has made no provision for the payment of corporate tax.

Elections and Way Forward: The campaign manifesto of Sasha Mutai, one of the candidates for Chairman, was circulated online a few weeks before the election. In it, he articulated his plans including, short-term ones of settling the KRU debt, encouraging more (tax-eligible) corporate sponsorships, ensuring salaries are paid on time, supporting programs to nurture more women and schools rugby, increasing broadcast coverage and improving player welfare (including providing health insurance). His long-term goals include building an affordable national rugby stadium at Kasarani and to have Kenya qualify for the 2023 Rugby World Cup in France.

After the votes were counted, George Gangla was elected to succeed Richard Omwela as the  Chairman of the Kenya Rugby Union. He received 33 votes against Sasha Mutai 20 and Asiko Owiro who got two votes.  Geoffrey Gangla is the CEO of Genghis Capital, an investment bank while Omwela is Chairman of Scangroup and a managing partner at a leading law firm – HH&M.

Today in Canada, sports betting company Sportpesa was unveiled as the title sponsor of the Racing Point Formula One team in its latest international sponsorship venture.

Look at this beauty – our SportPesa Racing Point car!

Others sponsors of the team are Bombardier, JCB, BWT and team officials also announced there was room for more sponsors to push the team forward to better performances on track during the season that begins in March 2019 in Australia. The team’s drivers said their realistic aim for the year was for fourth place in the constructor’s championship (i.e. behind the perennial top three teams – Mercedes, Ferrari, Red Bull), to get some podium finishes, and perhaps even a race win.

Racing point is the former Force India team that ran into financial difficulties during the 2018 season. The Force India team had its best performances in 2016 and 2017 when it finished fourth in the formula one standings.

A company linked to race driver Sergio Perez applied for administrators to be appointed at his Force India team over an unpaid £3M debt. It was supported by Mercedes, which is owed £9M, and sponsor BWT and this will allow the team to continue to operate as it sorts its finances. https://t.co/CLIiq0Ntcq

This also ends an unfortunate joke era when the newly-elected governor for Machakos, Alfred Mutua, unveiled his dream for a formula one track in his county, back in 2013.

The RaceFans site which broke the story last month reported that SportPesa is understood to be paying $8 million (i.e. ~Kshs 800 million) for its first year followed by $10 million in 2020 and a further $12 million if they remain for 2021.

An interestung rumor that SportPesa has coughed up some Sh3bn to sponsor Formula One side Racing Point Force India for three years is causing so many people indigestion. Especially to those who have nothing to do with either gambling or F1. Me, I’m just here for your arguments 🤓