I recently made a trip to London for a business event.  Before I left Nairobi, I was also assigned a mission to go buy some shirts at a famous London address. These are real cotton shirts made of good strong fabric that will last for many years and washing cycles.

I was told to look for Jermyn Street, which is a small street that in near Piccadilly Circus Train Station. What I found was a narrow street full of shops that specialize in men’s clothing – suits, ties, and shirts and to lesser extent shoes and other accessories like belts and cuff links.

The stores have old family names, many starting with the letter H – Hilditch & Keys, Hawes & Curtis, TM Lewin, with the year the company started e.g. 1866 to convey their long history of designing and producing fine clothing.

Shopping for shirts was a lesson in professionalism and efficiency. You’d walk into a shop and be faced with racks of shirts neatly folded and arranged in tall shelves by neck side ‘14.5 inches’ followed by ‘15 inches’ next to  ‘15.5 inches’, and on to the largest.  Shoppers would step up and pick out the colour of shirt they wanted, and look at other shirt features like the fit (normal or narrow) and shape of collar.

The shops all had assistants, smartly dressed young men and women, who were ready to help. They are able to look at a customer and accurately assess their size with just with a momentary glance and what shirt, trouser or suit will fit their body type. They only reach for a tape measure if you challenge them or to confirm their assessment – and are rarely wrong.

Another unique feature about the shops was their understanding of who their customers were. In many America cities or even Nairobi, if a black or shabbily dressed person walks into an ‘expensive’ shop they may be followed around by a shop assistant who will gauge their insecurity potential and who may not be very friendly in the belief that this particular customer can’t afford to buy anything in the shop.

But not on Jermyn Street, which has a surprisingly large amount of West African customers. Among Africans, our brothers and sisters, from the Western side of the continent are known for their investment in fine clothing with cost not being an issue – and the shopkeepers on this street will attest that they are good customers with fine tastes. So despite being casually dressed, I was able to walk up and downs several shops, pick and choose shirts, ask and receive advice and tips, and generally shop without being hassled.

The shops also understand the power of the sale, which appeals to casual and spontaneous shoppers like myself – and on this summer day, most of them had ‘sale’ and ‘discounts’ advertised in their shop windows. The shirts I got were priced at about  £70 (Kshs 8,400) per shirt, but I paid between £30 and £50 for them and the assistants carefully packed them for me to take to Nairobi.

Ory (@kenyanpundit) reigned some of us with a recent comment that people are complaining on twitter about a lack of parking at the Junction Mall in Nairobi, while there are people near there who don’t have enough food to eat.

I realized that it’s something that happens a lot. Today I spent the whole morning searching for cooking gas (LPG) which has been in short supply in Nairobi for about a month. Is that a superficial or a genuine subject worth ranting about? 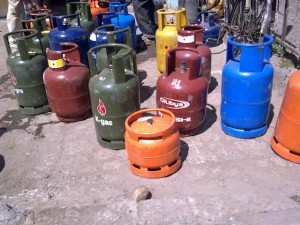 Other common complaints on twitter include:
– Not having tap water or being caught in darkness when the electricity distributed by Kenya Power goes off (including both at Jomo Kenyatta International Airport – JKIA)
– MPesa downtime which are almost a weekly routine with Safaricom
– Bad service issues at the bank or with an internet service provider
– A delayed Kenya Airways flight
– Newly done roads that develop potholes within a few weeks
– Companies that don’t respond to email
– Satellite TV that cuts off when it starts raining
– The increasingly bad traffic (and bad driving styles) around Nairobi

These are hardly life altering situations to tweet or complain about – and seem like trivial first world problems in a third world country. But they are unnecessary inconveniences for busy people with plans and appointments who have become accustomed to things like having regular electricity & internet connectivity, the ability to send money by phone at any time to any corner of the country, the convenience of boarding a flight to Mombasa and arriving in time for a court case or business appointment & return to Nairobi the same day, not having to pay a bribe or tip to get good customer service from a government or private office etc.

They have expectations of service that, when not met cause a un-anticipated re-deployment of resources usually precious time e.g. six hours driving around town, burning (sometimes scarce) petrol in search of (LPG) cooking gas or having to call in a previous favour to accomplish a routine matter.

The sad thing about this is that (at least in Kenya) politics is the missing link, and people here become accustomed to have low expectations about political class (Sonko) and their decision making. This is a fatal assumption as the 2007 election period showed and as we grapple with unnecessary & expensive challenges of infrastructure, distribution, under-employment, inflation, corruption, taxation, the solutions require the adherence of the political class to leave the third world

EBay launched an online classified ad site for international markets, called Kijiji, which means “village” in Swahili. The Kijiji services, which will be available across multiple cities in 50 countries to start, is designed to be a place where people can trade services that are local in nature, such as finding renters or buyers for apartments or homes, finding a babysitter, posting job listings, selling goods and even placing personal ads.