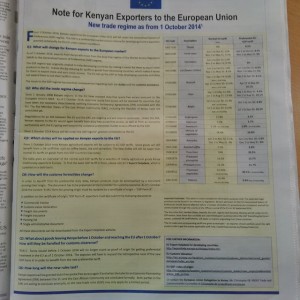 All this week, Nairobi plays host to a conference called Fin4Aag14 which has the theme of Revolutionising Finance for Agri-Value Chains.

It started with plug & play session in which 18 companies got to introduce their platforms linking agriculture to finance across Africa. This is the second edition of the session that was introduced at the conference in Kigali last year and proved to be quite popular.

They will be there all week presenting their platforms and engaging the attendees who are from across Africa, Caribbean and Asia and who include development specialists, financiers, policymakers and top bankers who hope to get youth interested in agriculture.

Fin4Ag14 is organized by the Technical Center for Agricultural and Rural Cooperation (CTA),  Central Bank of Kenya and African Rural and the Agricultural Credit Association (AFRACA), and is supported by the FAO, the Rockefeller Foundation and Afreximbank.