The African Development Bank (AfDB) Group held their 2019 series of annual meetings from 11 to 14 June in Malabo, Equatorial Guinea with the theme of “Regional Integration”

Highlights of the meetings:

1. Fast growth is not Enough: A key theme of the week was that the stellar growth levels in Africa (over 4%) were still not enough to create enough jobs and produce sufficient food on the continent.

Africa’s labor force is projected to be nearly 40% larger by 2030. If current
trends continue, only half of new labor force entrants will find employment, most jobs will be in the informal sector. Close to 100 million young people could be without jobs. #2019AEO #AfDBAM2019

"The Africa where people live on less than $5 a day is a problem," says VP Khaled Sherif, citing 4 main challenges to integration & #privatesector development in Africa: low levels of industrialization, lack of jobs, lack of value addition and infrastructure. #AfDBAM2019 pic.twitter.com/kSTARiCzQT

2. High 5’s:  Regional Integration is one of the development priority themes (‘ High 5s’) that the Bank had adopted at its 2016 meetings in Lusaka, Zambia alongside (to) “Light up and power Africa”, “Feed Africa”, “Industrialise Africa”, and “Improve the quality of life of the people of Africa.”

The global agro-industry business is worth $8 trillion – it is 9X bigger than ICT, 10X bigger than the auto industry – yet African countries look down on this huge opportunity for African agriculture – Professor Oyebanji Oyelaran-Oyeyinka #AfDBAM2019 #High5s https://t.co/NCsIaSUR67

3. It is Capital Raising time for the Bank and is organs. There are advanced talks towards a 7th general capital increase, the first since 2010, for the African Development Bank, which will be concluded in September.

We had an excellent exchange with shareholders and they are impressed with the work of the bank. They will meet in September, in Sharm El-Sheikh Egypt, to fine-tune aspects of capital raising and will announce the results in October – @akin_adesina #AfDBAM2019

A few months ago, Canada provided temporary callable capital of up to $1.1 billion to stabilize the AAA rating of the Bank.

[ON AIR] #AfDBAM2019: "I would like to plead in favour of a general capital increase of the @AfDB_Group to enable the bank to further promote and facilitate economic growth and development in #Africa" – Félix Tshisekedi, President of the #DRC. #CNBCAfrica pic.twitter.com/Vr2ezG9hUz

There are also ongoing negotiations for a 15th replenishment of the African Development Fund.

4. Visa Index: The Bank’s Africa Visa Openness Index ranks how accessible African countries are to visitors from within the continent in terms of requiring travel visas and tracks developments by different countries to improve the ease of travel for fellow African citizens.

25 % of African countries no longer require visas for African citizens
24 % grant them visas upon arrival
51 % still treat them like far away foreigners
We can't expect Europe or America to be more welcoming to Africans than we are to ourselveshttps://t.co/J4YTJZJHWO #AfDBAM2019 pic.twitter.com/1zlB4oFm8t

"Investments are like water – it goes where there is least resistence." – @akin_adesina on the strong and direct correlation between more open borders and higher level of investments. #AfDBAM2019 pic.twitter.com/Tj60RGTfpe

5. Low intra-Africa trade:  Ahead of the African Continental Free Trade Area (AfCFTA) which comes into force in July 2019, the potential economic benefits of full implementation were highlighted, with the greatest beneficiaries of the increased trade likely to be countries in the Central Africa region.

Africa has 54 countries; Alone they are not very competitive, but together, under the Continental Free Trade Agreement, they are a market of $3.4 trillion

The Continental Free Trade Area is the broadest free trade area since the establishment of the WTO .. Europe’s regional integration is at 70%, Asia’s at 60%, Africa is at 18% & with 16 landlocked countries, won’t grow without integration – @akin_adesina @AfDB_Group #AfDBAM2019

The Continental Free Trade Agreement can offer substantial gains – based on a number of scenarios and phase one can bring $2.8 billion in real income and increase intra-Africa trade by 15%, with the greatest gains felt in Central Africa – Dr. Hanan Morsy @AfDB_Group #AfDBAM2019

Also see the regional economic outlook reports by the Bank.

6. Debt levels in Africa: There was some discussion about the levels and types of debt across Africa and their potential burden versus the growth and infrastructure needs of individual countries. Also the Bank affirmed its support to help countries negotiate better financing terms, get better deals for extractive resources, minimize currency risks, and to enable them to mobilize their own resources domestically.

While "unsustainable debt" "debt distress" & "debt traps" are back in the headlines 10 years after the last financial crisis, and while Africa's debt levels have increased, they are not unsustainable, and its financing needs remaining gigantic – @sbmizrahi #AfDBAM2019 https://t.co/kHEvAZxwhh

7. Asia-models for Africa: At the AfDBAM2019, Korea and India showcased their partnerships with the Bank including on agricultural transformation, enhancing food security and scaling financing across Africa.

"Technology is key to agriculture development." Drawing from Korea's experience, Gyoungrae Cho, Dir of Intl Agriculture, shares lessons to take #agriculture in the continent to the next level 👉🏿 https://t.co/alDaesy2Qp #AfDBAM2019https://t.co/uuccoPL5t4 pic.twitter.com/6uasCAPD9p

8. Different forms of development finance by the Bank:

The #AfCFTA will come into full force in July 2019. The Bank has granted $4.8 million to the @_AfricanUnion to help establish the secretariat & support programs
👉🏿https://t.co/GDvzfXEfbZ
How will an African Free Trade Area be beneficial to your country? Comment with #AfDBAM2019 pic.twitter.com/qaFCWKcZEr

The "Kandadji" project for the regeneration of ecosystems and the development of the Niger Valley will benefit from a $128.8 million financing agreement, signed by the Bank and Republic of #Niger yesterday at the #AfDBAM2019 👉🏿https://t.co/BzknD4sWvL pic.twitter.com/ffxP19dIuj

It is a privilege & a pleasure to be the fund manager for the soon to be $100 million #KOAFEC Trust Fund at #AfDB. Below one of the studies we approved for financing. While a challenging role, the outputs like this make it worthwhile 🤗 #feedAfrica #Seoul https://t.co/cp4iKOreCw

Hopeful that the pledged $17m to replenish the Africa Solidarity Trust Fund is just an initial step to tackle #FoodSecurity and eliminate rural poverty on the continent. #AfDBAM2019

Last year’s edition of the #AfricaInvestmentForum secured investment interests valued at $39 billion including, for example, a $2.6 billion agreement to develop and finance the Accra Ai Skytrain.@AIFMarketPlace#AfDBAM2019

The African desert is a huge solar power plant in the making. 'Desert to Power' aims to make use of this territory together with countries in the Sahel region to light up and power the region – enough to support 250 million people. ☀️💡#2019WDCD pic.twitter.com/slG2KPJDvm

The Kazungula Bridge crossing the Zambezi river between Zambia and Botswana is set to be completed by 2020, reducing travel time from 8 days to half a day! 🌉 #AfDBAM2019pic.twitter.com/RL5s5ppyxl

We need to communicate the impact of financing; the bridge between Senegal & Gambia, also connecting, Zambia to Zimbabwe was another transformative project as was the highway from Addis to Mombasa that increased trade between Ethiopia & Kenya by 400% – @akin_adesina #AfDBAM2019

10. Malabo Image: Host nation, Equatorial Guinea, used the forum to shed an image about the country that is full of old stereotypes to one of economic diversification, transformation and infrastructure. President Obiang attended the opening of the AfDBAM2019 which were chaired by the country’s Minister of Finance, Cesar Abogo, who is just 39 years old.

Equatorial Guinea has a lot of stereotypes; people don't know what has happened in the decade – roads, electricity, ports, and if investors don’t know, they won't come from Cameron, Chad, Tanzania .. people think of the country from three decades ago – @CesarAbogo – #AfDBAM2019

There is no integration or free movement without security, says President Teodoro Obiang Nguema Mbasogo.#AfDBAM2019 https://t.co/GrTtGWjE8Y

(a) Parallel events during AfDBAM2019:

Quite obviously, the biggest achievement of the @AfDB_Group for 2018 is the 2018 Africa Investment Forum #AIF2018 which was able to not only attract to Africa, over US$38 billion in investments, but #market Africa’s huge #Investment Opportunities to global investors. #AfDBAM2019 pic.twitter.com/LC5AiSDGGR

The @BankerAwards Bank of the Year was @Afreximbank, Investment Bank was @Absa, Retail Bank was @GroupEcobank, while the award for Financial Inclusion went to @BOINigeria #AfDBAM2019

(b) Next meeting: Following these first-ever meetings to take place in Central Africa, the next annual meetings of the bank will be in a year’s time in Abidjan, Côte d’Ivoire – the bank’s headquarter city, where they the election of the Bank President will be the main agenda item.

The next annual meetings of the bank will be in Abidjan (May 25-29, 2020) where we will come together to elect a new president, or re-elect @akin_adesina, who in five years has pushed the bank to loftier heights – @niale_kaba, Governor for Côte d'Ivoire #AfDBAM2019

The African Development Bank, the leading development finance institution on the continent,  has announced that it will hold its 2019 series of annual meetings from 11 to 14 June in Malabo.

Hosted by the Government of Equatorial Guinea, the meetings are expected to feature over 3,000 participants including finance ministers, bankers and business leaders. The country’s preparedness to host the event was confirmed at a signing ceremony during a consultative meeting between representatives of the Bank and its African shareholders at the Bank’s headquarters city of Abidjan which was attended by the Finance Minister of Equatorial Guinea. 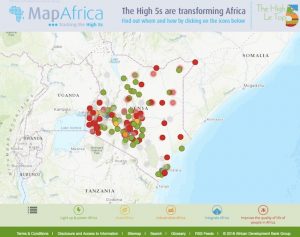 The annual meetings which this year will have the theme of “Regional Integration” mark a return to Africa after a two-year break.

They were held in May 2015, in Abidjan, which also marked the 50th anniversary of the bank and the return to its statutory headquarters city in Côte d’Ivoire, after a temporary relocation to Tunis for 11 years.

The 2016 meetings were held in Lusaka Zambia,  where the Bank, as an agent of change, introduced their ‘ High 5s’  of five development priorities which were to “Light up and power Africa”, “Feed Africa”, “Industrialise Africa”, “Integrate Africa”, and “Improve the quality of life of the people of Africa.”

The 2017 meetings were held in Ahmedabad, India, with the 2018 annual meetings at Busan in the Republic of Korea, and they had themes in each of the years, of “Transforming Agriculture for Wealth Creation in Africa,” and “Accelerating Africa’s Industrialisation,” respectively.

The regional integration theme for the 2019 meetings is derived from one of the pillars of the High 5s and focus on the opportunities of Africa with one billion people and a combined GDP of $3.4 trillion to trade with each other.