Various merger/acquisition (M&A) deals in the last few months in East Africa since the last update.

On February 27 Multichoice listed on the Johannesburg Stock Exchange, in a spinoff move by its parent company Naspers. The listing is expected to unlock value for Naspers shareholders and create an empowered African entertainment pay-TV business with strong financials and no debt to deliver returns for its shareholders.

The new company called Multichoice Group includes MultiChoice South Africa, MultiChoice Africa, Showmax and Irdeto a digital security company. It serves 13.5 million households around Africa and had a trading profit of R6.1 billion last year. Naspers itself has $20 billion revenue, and owns 31.2% of Chinese giant Tencent and large stakes in other e-commerce firms in Russia (Mail.Ru) and India (MakeMyTrip).

In 2006 Naspers facilitated the sale of a 20% stake in Multichoice South Africa to investors in a black economic empowerment program initiative and about 90,000 individual and companies bought the shares through a vehicle called Phuthuma Nathi (PN) that now owns 25% of Multichoice South Africa.  Over the years, PN’s shareholders are estimated to have got 17 times return on their investment through capital growth (from R10 per share to R130) and dividend payments.

In the listing, an additional 5% of Multichoice South Africa will go to Phuthuma Nathi at no cost and thereafter, Naspers will facilitate the exchange of a quarter of PN’s shareholding in Multichoice SA for shares in Multichoice Group.
.
Similarly, in Kenya, the Group has implemented a transfer of 30% of the shares held by the Group in GOtv Kenya to a qualifying local nominee (whilst maintaining the beneficial interest in the stake) in order to comply with local ownership requirements. 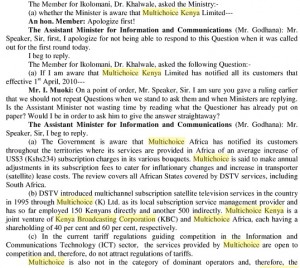 and peculiar Kenyans
This week, Multichoice Kenya launched a promotion called #DSTVrewards in which their active subscribers are eligible to win Kshs. 600,000 (~$7,000) in prizes per week for the next few months. In addition, other subscribers can win 10% discounts for paying on time or win a year’s subscription by spotting a box while watching TV (and sensing an SMS to the company)
The competition’s launch showed some aspects of peculiar Kenyans including:
Other takeaways from the launch:

GTV folds
It has been a bleak weekend for Kenyan sports – Gor Mahia lost 0 – 5 to a visiting team from Rwanda, Zimbabwe has now defeated Kenya four matches in a row in Cricket at Mombasa & Nairobi, but most shocking was the sudden shutdown/collapse of GTV – who for the last two years were the main broadcasters of the English soccer premier league in several African countries.

Their statement attributes the collapse to the ongoing global credit crunch, but their demise seems similar to that of Kirch Media who spent big in the late 90’s to acquire the rights to broadcast two World Cup events and also 100 years of formula one races among other media properties – but who folded shop a few years later in one of Germany’s biggest corporate collapses.

What next? I expect Multi-choice DSTV to step in and pay the liquidators of GTV about 30% and take over their broadcast rights in Africa (and perhaps hike their prices too), while in Kenya, a successful bid for GTV’s soccer rights could also be an opportunity for Wananchi’s Zuku to make a nationwide impact.

Business impact in sports
The local impact of the economic crisis is likely to be replicated in sports.

– The local soccer league did well last year (2008) with private interests participating and sponsoring the teams & competitions – there was huge fan interest, media interest (for once local radio stations actively previewed, reviewed and encouraged attendance of local soccer matches) and a private security firm (G4S) was in charge of the ticketing and match revenue collection.

But will the economic crisis affect things? Will sugar teams like Sony and Chemelil continue to support sports when even the only profitable company in the sector (Mumias) has profits down 80% this year? And what about Sher (Flower) and other small company-sponsored teams?

– The local motoring scene was mainly supported by KCB last year and fortunately, despite the bank’s ongoing problems – particularly with a fellow sponsor (Triton), they have agreed to also sponsor the 2009 rally season. However, the loss of Paris Dakar to South America shows the global nature of sports and that events (like the Safari Rally) can be translocated elsewhere if countries don’t pay attention to details of sports management. in 2009, pressure shifts to South Africa to progressively move nearer the completion of stadiums for the 2010 world cup.

– Rugby continues to be well-organized, attract top-notch sponsors, and the annual Safari Sevens is the premier sports event(party) – with Kenya’s Sevens Team off to participate in the IRB Sevens World Series next weekend.

Bad management
Another problem in Kenya is bad management – and while every sport has behind the scenes ramblings and wrangles, Kenya is no exception with motor sports, cricket and soccer feuds that have long been a distraction for the sports.

Also, all sports go through generational changes – and in the off-season, Athletics Kenya management went through elections that were well contested. However, in Kenya we need to have longevity of athletes, not management officials; it is rare to have someone (except for Catherine Ndereba) participate successfully at more than one Olympic event. Other countries stars like Haile Gebreselassie, Hicham El Guerrouj and Kenenisa Bekele have successfully represented their countries at consecutive Olympics – while in Kenya it is sad that it is mainly the officials who show such endurance – and that people who were ‘in charge’ of sports like soccer in the 1980’s and 90’s are still in charge today (Sammy Obingo, Sam Nyamweya) – and continue to bicker and blame each other for the problems in the sport.

Having recently read Foul, FIFA comes across as a corrupt institution that does not care about individual countries attempts to improve management of their sports affairs – FIFA wants to dictate who will be the local managers of soccer, and no matter how bad or corrupt they are, they are FIFA’s people who should not be interfered with unless a country wants to be suspended from regional or international soccer competitions.

EDIT: Feb 4 2009 – South Africa based DSTV SuperSport channel reclaimed the rights to broadcast live all English premier league matches, including those from collapsed GTV in 22 African countries over the next two seasons