This morning at the Central Bank of Kenya, President Uhuru Kenyatta launched a new generation of coins in Kenya.

This follows the 2010 constitution which barred the image of any person, (Notes and coins issued by the Central Bank of Kenya may bear images that depict or symbolise Kenya or an aspect of Kenya but shall not bear the portrait of any individual) appearing on Kenya’s currency, a practice that has happened since independence, primarily with images of the first and second presidents’, Jomo Kenyatta and Daniel arap Moi.

Governor @njorogep announces that the new-generation coins have been gazetted and will begin to circulate today. pic.twitter.com/PP77QFI4pN

The main theme of the coins, which the President said is “Kenya reborn and prosperity” follows the conclusion in October, of a series of long-running cases that had held up the procurement and printing of new currency by De La Rue.  The President said that the new currency has features that make them accessible to visually impaired people.

Edit October 12, 2018: The Central Bank of Kenya (CBK) announced that the Court of Appeal had agreed with the High Court that there was no collusion between CBK and De La Rue and that the CBK acted within the law in procuring the notes and applying a presence margin of 15% in evaluating De La Rue’s bid. This now clears the way for CBK to proceed with the printing and supply of new-generation bank notes.

Original Sep 28 2017: The look of Kenya’s currency bank notes and coins have not changed in over a decade but that may soon change.

While a case has been filed by an activist Okiyah Omtatah demanding that the Central Bank of Kenya (CBK) print new notes and coins immediately, it will not be the immediate reason for any change. In responding to a Q&A after a monetary policy briefing last week, the  Central Bank of Kenya Governor, Dr. Patrick Njoroge, said they while they do not respond to claims  (that they were deliberately keeping the portrait of the first president to perpetuate hero-worship), he mentioned that Kenya’s new generation currency will be consistent with the constitution and CBK Act.

The new Kenya currency bank notes and coins are expected to be produced by De La Rue, under a joint venture partnership in which the Kenya government has a 40% stake. That said, some images that have been shared on social media are apparently not genuine depictions of the new notes.

Kenya is entering into a joint venture with De La Rue which has been printing the country’s currency for many years in Ruaraka, Nairobi.

The 2016 De La Rue annual report notes that the banknote market is over-supplied, and with 26% of the global bank note market, the company is consolidating and restructuring its operations. 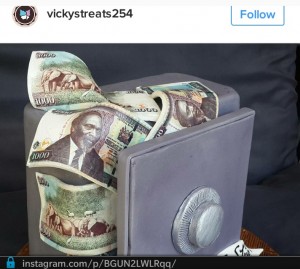 The deadline of new cheque modernization passed this week, on June 1. Yet many bank customers had not yet received new chequebooks, and many more were not fully versed with the process, which entailed a change of chequebooks.

The Kenya Bankers’ Association (KBA) left the public relations of the process to its’ member banks resulting in low awareness and did not communicate till May 31 with adverts in the newspapers re-assuring customers and the public that the old cheques will be used for an indefinite period. This paled in comparison to the introduction of mobile number portability (MNP), in which the regulator (CCK), service providers, and mainly mobile companies carried numerous advertisements about the transition to the new service. (Mobile companies ran extensive promotions to retain their customers or win over their competitors’ subscribers).

There are still many unresolved questions, even with the extenstion:

– Old chequebooks were issued though the month of May, but customers then had to get the new chequebooks at month end. Who bears the cost of printing books that were about to be phased out?
– Do the new cheques clear faster? e.g. 1-day for Nairobi cheques? Speed is important for payments in the age of M-Pesa. The last statistics from the Central Bank (CBK) showed that in 2008, about 50,000 cheques were being cleared daily. Many suppliers now insist on getting paid by M-Pesa (which takes less than a minute) or by real time gross settlement (RTGS a.k.a corporate m-pesa done by banks – but this also carries a high risk of fraud risk of fraud – at 69% of bank crimes)
– What happens to post-dated cheques? These are used for debt repayments and for motor insurance loans (some banks use these for collateral over up to 10 months)
– There is no apparent difference in the design of the old and new cheques. So what has changed to warrant the exercise?
– Are cheque printers (mainly De la Rue) able to print enough chequebooks for a smooth roll out next time?
– Some banks said that old cheques will still be honoured in-house i.e. if drawn to people who also use the same bank, while others told their customers they would not be honored. KBA should communicate a clear deadline when all banks & customers must switch.

For now, the old and new chequebooks are in circulation, but more information has to be provided to resolve the cheque truncation process.

The Central Bank of Kenya (CBK) FY 2009 (PDF) results are out and, compared to last year, it’s a different story.

Banking on other Income: CBK is another institution that has had other income yield great returns. While net interest income was down from 10.3 to 8.4 billion, and commission income on treasury bills and bonds was flat at 3 billion (investors opting for corporate bonds), CBK booked a forex gain of 13 billion ($173 mullion) up from 54 million on revaluation (a 25,000% gain) and 4.8 billion from the controversial $45 million sale of the Grand Regency Hotel. So profit for the year was 23 billion ($306 million), up from 9 billion in the year before, and CBK paid a dividend of 7.2 billion ($96 million) to the Government of Kenya (GoK) (up from 4 billion). And while CBK is exempt from income tax, KRA (the tax man) is not letting go of a Kshs. 22 million employee tax dispute with the CBK.

Generous Creditor: CBK lends to employees at 3% (perks of banking) and charge the government 3% on their overdraft. In a July 07 agreement GoK agreed to pay CBK 1.11 billion p.a. over 32 years at 3% to settle a GoK overdraft dating back to 1997. The CBK act limits the GoK overdraft to 5% of gross recurrent revenue (so currently this should not exceed 17 billion)

UK assets: CBK has 194 billion in assets held with united kingdom banks, that’s even more than Kenya (66 billion), or the rest of Europe (31), and USA (20) while all their 312 billion liabilities are in Kenya. This was even after they increased euro and dollar assets, and reduced sterling pounds, compared to ’08.

No Gold Standard: CBK gold holdings are just 34 million (less than $500,000) up from 28m year before. In comparison, just this week, India pipped China in the gold race buying $6.7 billion worth of gold from the IMF in hard currency (but is still only 10th largest holder)