EDIT August 24 via SBM Bank Kenya: If you have been transacting with the bank in the last 60 days, you have 6 months to update your documentation #KYC.

We thank you for walking the transition journey with us. To guide you on how to access your funds and our banking services, click on the link below.https://t.co/b4THj8NaZ4 pic.twitter.com/F4xs1D8ZEY

EDIT August 15 2018:  As part of the transition of Chase to SBM, cheques and EFT’s will be temporarily halted from Thursday 16th August to resume at new SBM counters on Monday, August 20, 2018. Also, it appears, Chase Bank customers will be required to fill out new account opening forms for personal & corporate accounts, wire transfers, chequebooks, cards (debit & credit) and to access digital banking services. This is in line with “know your customer” and to condemn the identity, authenticity and validity of Chase customers being integrated into SBM.

Chase debit /ATM cards cease to work on Friday, August 17 and customers have been asked to collect new SBM cards from their “home” branches. Chase Bank chequebooks also cease effect on that date and customers will be issued with new SBM Kenya chequebooks, with the first being free of charge). Users of the popular Chase Bank Mfukoni app will be prompted to update it and to download a new SBM Kenya app – which has familiar features including airtime purchase, utility bill payments, account statements, chequebook requests and Mobile2bank / M-Pesa transfers of up to Kshs 500,000 ($5,000).

April 18 2018: Yesterday an agreement was signed to conclude the transfer of 75% of the deposits held in Chase Bank that was placed under receivership in April 2016, to the State Bank of Mauritius (operating as SBM Kenya), with the balance remaining at Chase (in receivership) that is being managed by the Central Bank of Kenya (CBK) and the Kenya Deposit Insurance Corporation (KDIC).

The agreement enables customers of Chase Bank to immediately access 25% of their deposits that will be placed in current accounts at SBM, and another 25% that will be placed at savings account at SBM that will earn 6.65% interest per annum. The balance of funds being transferred from Chase will be placed in fixed deposits at SBM that mature over three years with one-third becoming available to Chase depositors on the anniversary date of the agreement for each of the next three years, in what CBK states this represents a substantial resolution of for the depositors of Chase Bank.

SBM Kenya is happy to announce the conclusion of the acquisition of certain assets and assumption of certain deposits with relation to Chase Bank. We're looking forward to building great relationships with all our customers. pic.twitter.com/tzpAlTihWe

SBM Kenya is part of SBM Holdings that is controlled by the Government of Mauritius and has $5.8 billion assets and is the third largest company on the Mauritius stock exchange with a market capitalization of $680 million.

EDIT; July 6: CBK announced that SBM has commenced the acquisition of certain assets and assumption of certain liabilities of Chase Bank in line with the announcement of April 17, 2018, and following approval from the CBK on June 13, and the Kenya’s Cabinet Secretary, National Treasury on June 28, with a goal to complete the  acquisition and assumption process on August 17, 2018.

Since the announcement, more service have become available to the customers of Chase Bank that reopened. This past week, more services became available. Here’s a summary

Services That Have Resumed 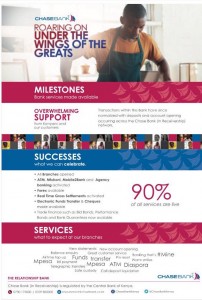 As more services become available, the outcome of the bank from receivership, access to large deposits, the possible sale to new investor, the matter of insider loans taken by directors that led to the bank run and close are yet to be concluded.

EDIT: On August 15, Chase Bank announced that they had received approval to resume lending and taking long-term deposits.

Why do customers stay with their banks when they are unhappy? Is there a Stockholm Syndrome in banking? Or are there strings or reasons that keep customers tied to unhappy banking situations?

The Competition Authority of Kenya is undertaking a study to:

…explore and establish if there are any barriers to bank customers switching providers, including, but not limited to, lack of awareness of alternatives, the ability to access and assess relevant information and eventually act on this information to switch, costs of switching, account closure practices and any behavioural biases that may lead to consumer inertia to switch; (c) determine how the barriers identified impact on market development and customer choice;

They will see if laws need to be changed, or what government agencies can do to remove switching barriers, and if there are bank industry practices that need to be addressed.

Quite a few banks have invested in ticket systems to ease queues at their branches. So customers walk in, select what transaction they wish to perform on a ticket machines, receive a ticket, and wait for their number to be called up after which they go to an indicated  teller to have their transaction done.

Take a number and wait.

Many of the tickets indicate your place in the queue, and how long you can expect to wait to be served. But I have issued with the system. While they work well at some bank branches, they seem to make things slower at other.

They may work in some bank branches, but in others they are just superfluous cases of copy cat purchases to keep up with the rival bank across the road.

This is noticeable in the middle of the month when there are relatively fewer customers in the bank, but you often find a high number of them wait longer than usual for their numbers to be called up.

Some observed problems with the systems:

One solution is for the machines to evolves into smarter devices where customers can actually transact themselves, instead of getting tickets to form other queues in the bank. There are now  more self-service stations or tablet devices at some bank branches, some just for marketing products, but going forward, they will be the devices that will really reduce queues at the bank halls.

This was inspired by a query from ‏@KaranjaJ on if there Is there a .Ke bank that delivers on its promise or is their verbal communication a load of B.S

1. Find a bank you’re comfortable with. You should not be unhappy with your bank.

2. If you outgrow the bank you’re with, move on. You may have been a customer for years, but your needs have changed, and these days it may not be as smooth as it once was. Maybe the bank ownership changed or the relationship managers you had moved on leaving you with without the friendly familiar service you enjoyed.

3. Don’t believe all promises advertised by a new bank product in a brochure. They are only telling you the good side.

4. Keep your old bank account for a while and only close it when you’re happy with the new one. Some customers find that the new bank is charging them for services they were getting for free at their previous one.

5. Negotiate with your current bank. They may waive some charges or make some changes, if you ask.

6 No one and no bank is perfect. Each bank has some positive’s, and also some negative’s.

7. The people who sell the product, are not the ones who will service it. When shopping for a new bank or product be wary if the person selling it is an agent on commission, not an employee of the bank. What they promise may not be delivered as you understand it.

8. Ask about all charges for the new service – Joining fees, admin/maintenance fees e.g. there may be an upfront 5% on your investment which is taken out before you account is event credited, and if that happened every year, you will not grow your investment much.

9. This is the era of mobile & internet. You should be able to view and query your accounts online – and this should be at no cost (it’s always cheaper for the bank to give you some account access, than you having to go to the branch to ask for a statement)

10. Read the fine print before you sign. You may be desperate, but take a few minutes to query some clauses, and it it’s a loan or investor agreement, ask to read it overnight, and get some legal advice.