The leading indigenous Kenyan banks now have scholarship programs that target bright children who are going into high school.

Managing Director Tim Carstens gave updates on various aspects during the quarter including:

Tullow Oil have just released their Kenya Report on their oil exploration efforts and local impact in the last year with special emphasis on the Turkana area.

And earlier, Base Resources who are a signatory to the Extractive Industries Transparency Initiative had also released their EITI impact report.In the last year, by their measure, Tullow Oil and Base Resources have paid the Kenya government $22 million and $16 million respectively in direct payments, and with more indirect benefits.

Oil and mining are industries that are complex and expensive to set up, but which don’t generate a lot of direct jobs – some of their numbers include:

Safaricom held their second AGM since their 2008 share listing at the Bomas of Kenya on September 2 2010. 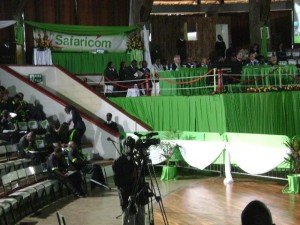 Angry Shareholders: really complained into management, mostly about the low dividend, and lack of freebies – and the ~1,000 shareholders largely went home unsatisfied (the bus stage was quite full)
Low dividend: Different shareholders complained 20 cents ($0.0025) dividend per share was too low, was not recognized as currency in Kenya, was not comparable to the company’s 19 billion ($238 million) profit, was not worth picking if it fell to the ground etc. The Board Chairman replied that this was a result of the large number of shares and, it was 100% increase of the previous year, and they were looking into share consolidation as a way of making it more meaningful
No SWAG: Shareholders complained about not being given transport to the venue, why there were shirts only for Safaricom staff (they [shareholders] are better ambassadors of the brand), why they only got bottles of water & juice on a cold morning, and why they could not treat shareholders better, when companies like Kengen, many shareholders (~¼ of Safaricom) could? One shareholder who looked like he had been to a ‘local’ before he spoke, said he regretted buying the shares, admonished the company for taking from the poor (subscribers) to give to the rich (board), hurled a few other insults in his speech and walked out to some applause.

No SWAG also includes annual reports, which were handed out at the door, but which shareholders felt should have been mailed to them. The Chairman said that this was a logistical impossible, it would cost almost 250 million ($3 million) to mail 800,000 books and last year shareholders had themselves approved that reports be placed on their website or headquarters, with summarized versions printed in the newspapers. How unwieldy is the large shareholder base? The registrars’ computer list at the entrance was over a month old and they did not have records of anyone who bought shares in the last few weeks.

Is CSR bad for shareholders?: Later on when not satisfied with the Chairman’s response on the dividend, they began tackling expense items in the books to see if they could dig out some cuts to yield more profit. Ccorporate social responsibility items came under fire; this argument was first seen at Stanchart a few years ago when shareholders felt ‘their dividend’ was being diverted to unauthorized expensive projects (said shareholder and former MP Jimmy Angwenyi), and which were costly (But Chairman replied that the total amount was Kshs 250 million, broken into small impactful sponsorships like boreholes and schools that had no overall impact on the 8 billion dividend [$100 million]) . Again they went further and began tackling huge payment items (anything larger than the dividend) and suggesting to the Board ways to cut down these costs.

Competition from Zain Airtel: Shareholders also took a stab at management for the high costs of their services, in relation to Zain who had recently cut call and SMS costs to 3 shillings and 1 shilling respectively arguing that the company management is asleep and they will wake up when they find their customers have fled unless they too cut prices. Outgoing CEO Michael Joseph took on these and said they had studied Airtel in India and were ready for the price cuts, but were surprised by the underhand tactics/accusations that followed. Safaricom will find a balance to protect their customer numbers, market share revenue, but most important were their profit margins. He added these prices were unsustainable, but that Safaricom would still make more money at 3 shillings than anyone else

Share price: Later in comments about the share price which has declined in the last month, CEO said the market over-reacted to Zain/Airtel promo they are due to foreign sellers who don’t understand Kenya. They take parts in road shows to teach such investors about the market, how they EBIT margin of 42% is exceptional compared to others like MTN and Orascom, and 4 of the 5 analysts who cover Safaricom put the share price as Kshs 5.5 to 5.8 (who’s the dissenter?).

Farewell Michael Joseph: Late the Chairman called on shareholders to thank retiring CEO Michael Joseph who built the company up from nothing in 10 years to be leading revenue earner and top brand in Kenya.

Waving the patriotic flag: After the meeting ended, CEO gave a talk on his pride in the company, which is a Kenyan company one can be proud of with its customers, M-Pesa (which people all over the world come to study), M-Kesho savings accounts (500,000 users signed up in 2 months). It is 60% owned by Kenyans, which none of their competitors (i.e. Zain, Orange, Essar can claim), all their spend is in Kenya, all their profits are re-invested in Kenya, with nothing outsourced outside. It has 2600 employees (all in Kenya) , and supports over 250,000 other Kenyans through dealership and mpesa agents and another 1,500 in customer care (which they can move that to India but that would not be in spirit of the company)

The CEO of Standard Chartered Kenya explains in the annual report that their strategy is aligned to that of the UK parent group, and that the (Kenyan) bank has focused on chosen markets, does business with customers they know well and products they fully understand – adding that, so far, the standard chartered group one of the few international banks that has weathered the global crisis.

I’m not sure that makes sense to shareholders since if the (UK) parent also drives the same strategy here in Kenya, being conservative has not been as kind to the bottom line

The conservative bank has seen its peers that have aggressively expanded, also grow at much faster rates. 4 years ago, Stanchart was almost equal in assets with KCB and today KCB is almost twice as large. Stanchart also maintained the No.2 profit figure behind Barclays each year, but falling further back, until in 2008 both KCB and Equity have passed its pre-tax profit position.

Outlook for the bank

– Change in strategy – should they have gone retail? They have Diva accounts (for ladies) and X account (for yuppies), mortgage, and corporate finance where they have cut some big deals

– New Chairman: There are on-going board changes, both executive & non executive. Chairman David Njoroge (board member since 1996, and chairman since 2006) and director J. Mugo (of federation of Kenya employers) will both retire at the AGM this month

– In 2008, they were the only big Kenyan bank to record a drop in income and profit. |Their loans went up 10% to 43 billion, and deposits were up 4% to 77 billion; also income was up, but costs went up 13% to 5 billion owing to infrastructure, technology, and staff costs. but only added two branches in year). The CEO says they have set aside 3.5 billion for new headquarters, acquire/refurbish branches (likely to be for high net worth clients), new core banking system, electronic banking new staff – all part of the largest group investment in Kenya.

-Their 2008 annual report is one of the biggest I have seen at 105 pages. The chairman’s statement takes 6 pages (3 English, 3 Swahili), CEO statement 8 (4/4) , (8 pages on community, environmental & development) – which includes mentions of their being the lead financial arranger for TEAMS sub –cable and Kengen energy expansion), one page on HR (mentions 48% of employees are women, have policies for extended maternity, non-discrimination), One page on tackling financial crime (they trained 300 staff on fraud & also trained 60 Kenya anti-corruption commission (KACC) staff on financial crime risk) – and finally 53 pages of financial statements and notes

– They spent 64 million on corporate social responsibility (CSR). The annual Nairobi international marathon (sponsored by Stanchart) raised 12.5 million in 2008 up from 9.4 million in 07 – and the funds channeled to nine eye hospitals around the country

– Loans to the manufacturing went up from 5 to 12 billion and real estate at 4 billion, transport & communications at 7 billion, and wholesale/retail trade at 10 billion were their main loan categories

– This month shareholders will amend article of the company to allow financial statements be sent by fax, e-mail or be published on their own website/Nairobi stock exchange (site) while notices may be simply advertised in daily newspapers along with abridged financial statements as long as they include an e-mail or postal address from where shareholder can request & obtain full accounts. Shareholders will also vote to allow electronic payment of dividends