PhD Fellowships from the African Economic Research Consortium  for people who have gained admission in 2013-14 to selected universities such as Cornell, Oxford, Ohio State or the Universities of Bonn, Sussex, Newcastle and others.  Apply through these university websites before April 30.
The African Leadership Academy seeks to  enroll the most outstanding young leaders from across Africa and around the world. Deadline is February 28..

The African Leadership Academy also has the inaugural ‘African Teacher of the Year Award’ to celebrate teaching excellence on the African continent. The final 3 shortlisted finalists will be honored at a gala dinner in Johannesburg, South Africa in October in front of media, the headmasters of 100 of the leading schools in Africa, and other dignitaries. The winner of the award will also win a cash prize of $10,000. Nominate an outstanding African secondary school teacher- by the 31st of March, 2013 to teacheroftheyear_at_africanleadershipacademy.org.

Aga Khan Foundation: International Scholarships – scholarships and loans for postgraduate studies in 2013-14 to outstanding students from the developing world. The Foundation assists students with tuition fees and living expenses only and half of the scholarship amount is considered as a loan, which must be reimbursed with an annual service charge of 5%. Application deadline is 31 March.

Big Brother Africa: BBA 2013 kicks off in May. To qualify, participants have to be above the age of 21 and speak fluent English.
Blackberry: Developers may apply for Built for Blackberry reviews and the $10,000 Developer Commitment before February 18.

(Edit) CNN Multichoice African Journalist 2013 is open to African nationals, working on the continent for African owned, or headquartered, media organisations and with work that has appeared in printed publications or electronic media that is primarily targeted at and received by an African audience. Deadline is 17 April 2013.

(Edit) The 10th edition of Diageo’s DABRA awards is now open. The Diageo Africa Business Reporting Awards will recognize journalists and editors who provide high quality coverage of the business environment in Africa in ten categories including ICT, finance, infrastructure, agribusiness / environment, tourism, best business story, business feature, newcomer, media of the year, and journalist of the year. Deadline is March 15.
(Edit) East Africa Philanthropy Awards: The 2013 EAPA awards from the East Africa Association of Grantmakers is now open for nominations in philanthropy categories for individuals, youth, faith-based, community, social entrepreneurs, and corporate philanthropy. Deadline is 30 March.
Egg Hatching Incubators are being lent to individuals and groups on credit, and with no interest charge.
Faithful Frames: Win a free wedding photoshoot worth Kshs. 15,000 (~$175). Deadline is  Jan 28.

(Edit) Film Mentorship Program: Opportunity for talented young African filmmakers involved in directing, scriptwriting, production, camera, production design, sound design and editing, to enroll in a workshop where they will meet professional filmmakers from all over the world in September 2013. Details here and deadline is 1 May.

(Edit) The International Academy of Journalism 2013/2014 Fellowship program Journalism in the Digital World is now open.  Deadline is May 3, 2013.
Kings Pool Challenge League: EABL’s Pilsner brand is sponsoring a national pool tournament that runs from 21 January to May 4 2013.
(Edit) The 2013 edition of Mobile Web East Africa  is on later in February in Nairobi. Read more about the event.
Nestlé Prize in Creating Shared Value (CSV) seeks innovative programmes, businesses or social enterprises that innovate with impact in water, nutrition, or rural development. Deadline is March 31
(Edit) PivotEast: The third edition of this mobile startup showcase competition takes place on June 25-26 2013 in Kampala, Uganda, and it is open to  all companies in East Africa including South Sudan, Ethiopia, and Somalia. Competition will be in five categories of mobile finance, mobile enterprise, mobile society, mobile utility, mobile entertainment – and this year companies can submit a product in more than one category. The deadline for entries  is 15 April.

(Edit) The Rockefeller Foundation Next Century Innovators Award series is now open. Nominate people or organizations that can win up to $100,000 for solving entrenched social problems. Deadline is February 28

Squad Digital: The digital agency is seeking an experienced digital business director with  knowledge of social SEO, Mobile (e.g. M-banking)
TAHMO: Design a sensor that measures a weather or hydrological variable (temperature, wind, dust or lightning) and is both inexpensive and robust.  Deadline is 1 March 2013.
Tony Elumelu Foundation: Is seeking companies to place interns with for periods of  8-10 weeks. They should have revenue of $250,000 – $5 million per year and agree to pay for stipends while the Foundation will  cover the cost of recruitment, travel, and accommodation
Toyota: Dream Car art contest dubbed “Your Dream—The Car of the Future” aims to create an opportunity for children (in 3 categories) —through drawing pictures of their “dream cars” —to develop their interest in cars. Deadline is January 31.
Tullow Oil: The Group Scholarship Scheme will offer up to 114 scholarships across its countries of operation (10 for Kenya) for the 2013/14 academic year and these can be in engineering & tech., oil & gas economics, business journalism, law, and others. Deadline is 13 February.
World Bank Africa: Social media internship – apply by responding to the phrase: #iwant2work4africa because..

I started using a Blackberry in 2012 courtesy of a loaner-phone from the company. It was an interesting time and I was looking to replace a Nokia E-72 and was considering a Nokia E6, and then Blackberry came along  – at a time when it seems most of the corporate and developer world sees the future as being either with Android or Apple phones.

It’s true that both Blackberry & Nokia are on the decline in terms of sales, market share and most important in terms of coolness or the wow factor (now the domain of Samsung and Apple) but both the  former companies remain strong in certain markets of the world like China (Nokia), and Africa (Blackberry in South Africa and Nigeria) with millions of core customers who have a long history of staying loyal (mainly due to BBM).

About the phone: The Blackberry 9860 Torch is a wonderful phone, that makes you wonder what is wrong with the company. Moving from a qwerty keyboard phone  (Nokia E-72) to a touch screen (BB 9860) phone was not the challenge I expected. In fact, it has made life better, as with a qwerty, you’re pushing the boundaries of safety and good taste e.g. tweeting while driving, walking the streets of Nairobi, or in a business meeting  (none of which are advisable).

Office Assistant: For mail, it works, very well for office mail, and multiple other accounts with which you can view attachments & documents, reply quickly or mark messages for later action. The calendar is also very easy to update and sync with the office one and a personal one for all meetings and events. You can back up contacts and messages with blackberry protect for recovery in case you lose your phone.

BBM: What more can you say about blackberry messenger (BBM)? It cuts across phone networks & country borders for seamless chats, photo sharing, instant group chats. It’s like a super secret cult of your friends to share quick, private messages.

Camera: Billed as a 5MP camera with a 4X digital zoom, it works very well and takes excellent pictures, even at a distance.  The quality is excellent and adding to the office assistant qualities, the phone also doubles up as a fax, scanner or photocopier to snap pictures of cheques, receipts, bank statements, and other documents for instant emailing or archiving.  I’ve stopped carrying a digital camera on trips as the BB one alone is perfect to snap very good pictures. It’s also very easy to share pictures on Facebook, twitter, Bluetooth or BBM and a recent update also allowed for one to have multiple twitter accounts.

Connectivity Cost & Service: Blackberry service costs Kshs 1,000 (~$12) per month from Safaricom or Airtel for data, browsing, email and messaging. With voice calls as extra, it’s cheaper to operate a blackberry (about Kshs 1,500 per month) than any previous phones (~2000 per month) because (unlike users of Android phones) you don’t have to worry about the extensive data pulling by apps that run in the background. Also for travel to other countries, it’s been super to check ahead for a local mobile company with Blackberry and buy a local SIM  & data package (for one week or month) and stay fully connected without incurring costly roaming charges (doing without voice and SMS) 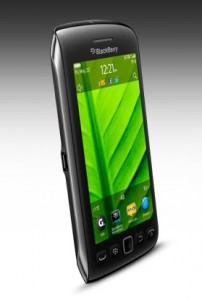 Battery life: The 9860 is a smart phone problem with a large screen (3.7 inches) and like, many smart phones, it’s a drain on battery life. The phone would sometimes go a half day before going flat, but since I turned off 3G and use EDGE exclusively, it’s able to get through a full day. The advertised 6 hour talk time of the phone, is often 6 hours of total battery time before having to recharge.

Apps: Waze, and Blackberry Maps work quite well for finding places and driving navigation, and are very accurate in Nairobi, Accra etc. However there are not enough apps, and few new ones being created and marketed.

No radio? This is Africa and radio is better than podcasts and song files. But at least radios features on other phones like the curve 9320/9220 models

OS 7: Too often you see the spinning clock when the phone is trying process several commands.

Overall: It’s an Android versus Apple world, e.g today the New York Times discontinued support for its blackberry app but maybe Blackberry (and Nokia) can discover what they are missing in terms of wow, and reach out to more developers on creating new versions of their apps.

That’s half the equation, and on the company side, there’s been little that’s new and compelling in terms of wooing new phone buyers to choose Blackberry to be their next phone. Still, I’m hooked and can’t see myself going back. What’s next Blackberry?