Last week brought news that Co-Operative Bank had a new Chairman – John Murugu, who has previously worked at Treasury and CBK, is to take over as chairman on October 1, 2017, replacing Stanley Muchiri who is retiring after attaining the mandatory age of 70.

The age of seventy as a cap for directors to serve on corporate boards has been paid lip service, until recently. But this year has seen prominent septuagenarians (70+ years) exit from financial firm boards including Peter Munga as Chairman at Equity Bank Group, Francis Muthaura as Chairman of Britam Holdings and now Mr. Muchiri who joined the board of Cooperative in 1986 and became Chairman in 2002. There could even be one more at Centum Investments with regard to top shareholder and director, Dr. Chris Kirubi who is also a former Chairman of the firm.

Dr. Kirubi was re-elected to the board in 2015, but the Centum AGM next week, where three other directors – Dr. Jim McFie, Henry Njoroge, Imtiaz Khan, all retire from the board, has an oddly-worded resolution – “Director above the age of 70 Years”  Pursuant to paragraph 2.5.1 of the Code of Corporate Governance Practices for Issuers of Securities to the Public 2015, to approve the continuation in office as a Director by Dr. Christopher John Kirubi, who has attained the age of seventy (70) years, until he next comes up for retirement by rotation.

Section 2.5.1 of the Capital Markets Authority (CMA)  Code of Corporate Governance Practices for Issuers of Securities states that it is desirable for board members to retire at the age of seventy years. Other changes in the code which are now been enforced more strictly include:

Kenya Airways (KQ) held an EGM – extraordinary general meeting of its shareholders today in Nairobi. KQ Chairman, Michael Joseph opened the KQ EGM with a statement that this was essential to the future of the airline, as it restructured their debt and reduced their cash payments. He cited the origin of the airlines’ problem as the fleet expansion, ordering new planes back in 2005, that arrived later than expected, and soon after there were issues like terrorist attacks, economic decline, Ebola and the airport fire. This was at a time that there were a lot of state-owned Middle East airlines allowed to Nairobi who did not have a profit motive and who undercut their KQ’s prices. 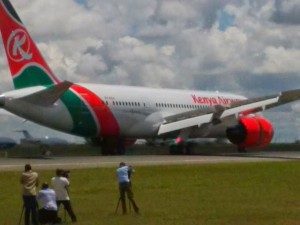 He said the board had made responses such as offloading some aircraft to leases till the situation improved and they had also hired Sebastian Mikosz as CEO, who is a turnaround specialist.

The Michael Joseph factor: Shareholders seem to have a lot of faith in Michael Joseph as a person to lead the turnaround. This is because of his legacy at Safaricom; he himself admitted as much in the challenge ahead of him, but he said that turning around KQ was much more complicated than Safaricom.

What Went Wrong? When it’s not clear what happened, Kenyans typically assign blame to corruption or mismanagement and several shareholders ask about a forensic audit query that had been done at KQ. Joseph said they had not forgotten the forensic audit, and he was going to clean the airline; he said that action had been taken with staff several dismissed or in court (He said justice was slow in the country cited a case where the former CFO had sued the airline and that case had not been heard a year later).

Payment to advisors; This came up several times and the figure cited was Kshs 1 5 billion. Joseph said the payment was a lump sum figure for the many advisors engaged in the complex restructuring deals. He cited Mckinsey as one case he was not happy and which had been terminated. Others were international competitively sourced and they had negotiated them down but had to pay.

Management ownership and staff pay: Shareholders asked the board and management to show commitment, by becoming shareholders. Joseph said he was a big investor at Safaricom and the KQ restructuring had an employee share ownership plan (ESOP) as part of the ownership plan, while disclosures about directors shareholdings would be forthcoming. Another shareholder asked the board and management to take a pay cut in line with what was expected of other employees.

Role of Government: Joseph said that the Government had allowed many new foreign airline flights to Kenya and that whenever the president visited abroad, other presidents asked if their airlines can fly to Kenya, or the tourism minister allows them to fly tourists to Mombasa – forgetting about KQ. Part of their future engagement with government will be on licensing of other airlines. On a question about nationalizing the airline, Joseph said that this had been ruled out and that KQ would remain a public company.

Banks left out to dry: Some shareholders asked if the banks agreed to the conversion? Banks lend depositors money to get it back and not for shares – and do not take KQ’s problems to other banks where this will make us miss dividends. There is a court case brought by some banks that will be ruled on August 10.

Fleet and performance CEO Mikosz spoke about monitoring the perception created in media about delays and cancellation at KQ and which unfairly gave the airline a bad impression. He said that flying 160 flights per days you expect 2-5% are expected to have some delays and this was standard in the aviation industry, but their stats were good.

Shareholders at the KQ EGM unanimously voted for the lengthy balance sheet restructuring that was done in a single vote.

Another circular will be issued with terms for shareholders investing afresh in the airline.

The next meeting will be a regular shareholder’s AGM on September 21.