Interswitch is a Nigeria-based, transaction switching and electronic payments processing company, with operations in several African countries. The company, founded in 2002, provides payment solutions for individuals and organizations, mainly around financial services to several private sector companies, as well as in the public sector (government revenue, health care etc.)

Interswitch was majority acquired by Helios Investment Partners for $96 million in 2011. Helios are best known in Kenya for their large investments in Equity Bank, Wananchi Online, and soon, at  Telkom Kenya, where they are in the process of buying out France’s Orange Telecom.

Interswitch itself entered Kenya by buying 85% of Paynet Holdings in 2014, which was best known for it’s Pesa Point network of ATM’s, which was launched in 2005,  and which grew to serve customers of over 100 institutions including several of the large and mid-size banks. At the time of the  Interswitch purchase in 2014, Paynet Services had 2013 revenue of Kshs. 320 million (~$3.7 million) and powered 1,200 ATM’s and 1,300 bank agent locations in Kenya.

A visit to a Huduma centre showed that a shared building or hall where different banks serve their customers  may be the future of the bank branch.

Despite new mobile, ATM, and internet channels, customers still need to come into bank halls quite a bit, as seen by the queues at beginning and end of each month. A lot of this is because customers need to bring and and remit payments that end up going to other banks either via direct deposit, cheques, or RTGS. Does the money need to physically move? No But the customers do, going from building to building to do single transactions at many banks.

It helps if you have a place like Sarit centre which is an banking attractive destination because it has so many bank branches under one roof, with many more in adjacent buildings.
Can banks share a hall like a Huduma one, and second some staff there to serve their customers in such a centre?. This way they can share the cost of security, which can be handled by armed guards outside, and leave a friendly customer interface inside that is devoid of bullet-proof glass (like some Uganda bank halls)
Every bank that has a branch network incurs a repeat of the same costs of staff, security, cash handling, advertising signs, stationery  etc. They also have building leases, insurance, and fees per branch or outlet  – such Kshs 65,000 or $765 per year for an ATM license in Nairobi County.
Big banks have invested in big branch networks, but can smaller banks share halls in new neighborhoods or towns like Eastleigh and Kiserian that experience rapid growth, and the banks have to catch up. Shall we see a bank hall or post office hall in such a place with 20 desks, and 20 sets of staff for 20 different banks?

There are some signs of this coming: 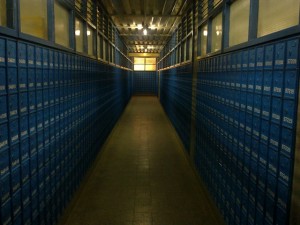 Why Agency Banking? If 3 of the country’s 5 largest banks with the largest branch footprints chose to go agency banking. Agency banking expands the reach of the bank about 100-200 branches to anywhere from 1,000 to 20,000 outlets through the agent model Speaking at an investor briefing last year, Equity Bank CEO James Mwangi spoke of the extra reach would bring for them and which signaled an end to the rapid branch and staff expansion that the bank had been known for.

Equity initially looked like they would partner with Safaricom’s strong M-pesa agent network (22,000 agents) for their banking extension, but that partnership seems to have hit a brick wall) and now the field is open to dukas, bookshops, and grocery stores, kiosks, hardware & phone sales shops, and others established shops especially in remote villages where banks are unlikely to open branches.

The shops must fit the criteria set by Central Bank of Kenya (CBK) for bank agents (more here) – including that they cannot be mutually exclusive. (Not being tied to one bank can be an opportunity for established village business owners to act as agents for several banks)

Positive economic outlook: He noted that the picture is much improved from last year; with good agricultural harvests and prices, high exchange rate, government social programs rolled out (Vision 2030 social equity programs for the youth & marginalized), positive progress in the political arena in terms of new constitution, formation of the East African community with 126 million people, remittances are above 2006 figures, tourist arrival are ahead of the 2007 figures, and overall the economy of Kenya is expected to grow by 4.5 – 5% this year.

Bank focus: How does bank focus strategically?
– They have introduce new concept to influence direction of the bank, which for many years operated at micro finance until five years ago went into commercial banking. They have now created structure and are building capacity to move into investment banking (highest IRR per unit of capital), and merchant banking (private equity, venture capital) around east Africa.
– About 400,000 customers graduated to upper and middle SME’s class. They have invested in a level 4 data centre, with a 65 million-card switch and banking platform that can handle 35 million. also boldly claimed that they have overtaken Safaricom to be Kenya’s premier brand
– Innovation will continue through more collaboration with Telco (e.g they have opened 400,000 m-kesho accounts) without agents (yet) and are doing about 20,000 ones per day. Their their dream of opening 10 million accounts is still alive. They are acquiring merchants for visa and MasterCard (3,000 merchants in Kenya) and CBK has approved 4,000 retail outlets to become agents; they want agents to do transaction processing (withdrawals/deposits) at a commission, and equity do loan processing – so when you go buy milk and bread from kiosks, you may be able to withdraw cash

Summary: He’s optimistic because unlike last year, income is now growing faster than expenses, staff costs grew at 16% compared to previous 40% and asset quality back to 2007 (before Kenya election chaos and drought). The CEO was keen to emphasized that capital base of bank good, and shareholders will not be diluted this year or next year and that their investment in human resource, capital and systems are large enough and stable enough for the next three years, meaning that they can at least double in size without making new investments or seeking new capital.

Regional diversification How have Sudan and Uganda performed?
Sudan: Contributed to profit in first year of investment almost ~$2m– not bad for Greenfield. So far only operated in equatorial Sudan, which they can run from Uganda. They have also got lots of corporates to sign with them as their bankings, which used to take 4 days, now takes seconds with equity. The CEO expect S. Sudan to have a peaceful referendum vote next year, which will yield Africa’s 54th state

Uganda: Here, they have been bleeding – in Q1 lost 12b shillings (Kshs 600m), Q2 made los of 3b shillings (Kshs 120m) – but expect to break even this month, and be out of loss in September. In Uganda they made a made mistake, as they did not freeze lending when they bought the other bank – left in the old managers who lent $16 million in 3 months. He believes its much improved; even though they bought a non deposit taking organization, they now have more deposits than loans, (have mobilized Kshs 4b deposits, compared to loans at Kshs 3b) and have 440,000 savers in Ug.

Their increase in provisions in H1 of 2010 (up 211%) is as a result of making a one off hit to clean up Uganda books and the investment was a learning process for them. In hindsight they should have frozen lending and it’s a good lesson they will apply in more countries – the cost would have been much higher if they had made their first outside investment in south Africa or Nigeria and they still have their plan to be in 10 African countries in the next 5 years and now have a 50 member expansion team.

The next foray in East Africa is likely to be Tanzania, earlier they had wanted Rwanda, but there was no easy entry point. But with the new east African community protocol, staff will be able to work without work permits, and it will be much easier to travel across borders

Cyber crime: While he said there have been no hacking attempts on their secure systems, his managers mentioned that there have been attempts to phish or skim originating from eastern Europeans who see Africa as a soft target – however the attacks are not specific to Equity Bank (who are a leading issuer of visa cards) who are on their guard and have not lost through this fraud.

Agency banking opportunities: – From September this year, customers whose salaries pass through Equity will be able to apply for loans from mobile phones or ATM’s, not fill out any forms, and automatically get approved a loan (without human interaction)
– They do about 2,500 M-Pesa transactions each day through their ATM’s from which they earn more than normal ATM charges, gettingabout Kshs 50 – 60 per m-pesa transaction as customers come and withdraw amounts that other agents can’t facilitate owing to float