Agency banking which has been around for seven years, is going to see a transformation of branch banking as banks roll out more products to alternative delivery channels. 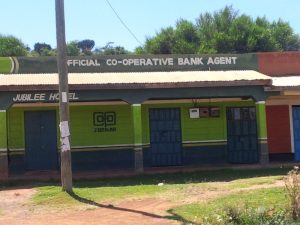 According to Central Bank of Kenya statistics on the distribution of agents, 87% are with 3 banks – Equity Bank with 25,428 agents, Kenya Commercial Bank  with 12,883 and Cooperative Bank with 8,856 agents. Bank customers in Kenya transacted Kshs 734 billion in 2016, up from 442 billion in 2015).
Agents are big and deliver dozens of services that including SACCO transactions, payment of school fees, NHIF, KRA and utility bills – which bank customers can now do from their neighborhoods and which are accessible for longer hours than bank branches. While cash deposits and cash withdrawal are the bulk of the transactions, agents also processed Kshs 14 billion for payments of retirement and social benefits, and another Kshs 6 billion to utilities
Crucially, agents are the link between cash and the mobile banking/online banking worlds.

Last year Co-op reported that their branches did 15% of bank transactions with the rest being done on alternative channels, and yesterday Equity Bank disclosed that, this year, non-branch transactions are  91% of all monetary transactions – which are now happening on self-service and third-party platforms at variable costs – compared to the fixed costs of branches.

Equity is rolling out agency banking in Uganda, and the Central Bank of Kenya has had knowledge exchange partnerships with teams from Tanzania and Malayisa who were studying agency banking in Kenya. Equity CEO James Mwangi also said that Equity Bank agents share between Kshs 3-5 million in commissions every day as he pondered that the bank did not need new staff and could give probably back 70% of the physical space they currently have.  Their next step will be to digitize corporate banking to enable services to be done on alternative channels, the way retail banking has been done.

Today, Barclays became the first Kenyan bank to release its financial results for the year 2016, which was a tumultuous year for the Kenya banking sector.

Thereafter CEO Jeremy Awori said that while Kenya’s economy looked stable with an enviable economic growth rate, a stable currency and moderate inflation, the dip in shares at the Nairobi Securities Exchange and profit warnings issued by various companies showed some the struggles that companies, including their customers, were going through. He added that challenges at some banks had resulted in increased regulatory scrutiny and audits on systems, anti-money-laundering, and insider lending all other banks, and Barclays had passed. Also, that  2018 will bring new rules on impairment (bad loans) and capital requirements.

They had the investment in technology by going paperless and customer focused channels including intelligent ATM’s that allow 24-hour cash deposits, as well as enhancing internet and mobile banking. They have also invested in alternative channels and were the first international bank to embrace agent banking in a deal they signed with Posta Kenya under which they would have post offices in far-off places (like Wajir) act as customer interaction points for the bank.

Summing up the financial results for the year, Barclays assets grew by 8% to Kshs 260 billion, deposits went up 8% to Kshs 178 billion while loans went up 16% to Kshs 169 billion. Interestingly 68% of bank deposits don’t earn interest (they are in transactional accounts). Also, the loans increases were mostly in the first half of the year while those after the interest rate cap law (passed in September 2016)  were mostly existing customers topping up their loans.

Income went up 8% to Kshs 31.7 billion as expenses also went up 8% to Kshs 16.9 billion. But there was a huge jump in provision got bad loans, which more than doubled, to Kshs 3.9 billion and this resulted in pre-tax profit dipping from Kshs 12 billion to Kshs 10.8 billion. 90% of the impairments were from retail/ personal lending.

The dividend for the year will be Kshs 1 per share – comprising an interim dividend of 0.2 per share and a final dividend od 0.8 per share – unchanged from 2015. The payout will be a total of Kshs 5.43 billion (~$54 million)

Going forward, digital and automation will be key drivers to give customers better and efficient experiences. Barclays also plans launch new mobile banking products soon, and to become a financial technology partner to their customers, not just a bank.

KCB is working on revolutionizing their banking strategy that will culminate in a digital finance rollout in a few weeks. This was revealed by KCB CEO Joshua Oigara at a financial technology forum at the Capital Club in Nairobi that featured futurist & author Brett King. Oigara said that in their 100 years of existence, KCB had gained 5 million customers, but in the two years since launching KCB M-Pesa, that number had doubled.

KCB is working with King and Deloitte, on new digital finance products and strategy, which they had already shown to the Central Bank of Kenya (CBK), who have to approve banking products and changes in the country.  Oigara said that customers are adaptable and don’t mind the changes, but that it is banks that have resisted innovation, and that said he has met many young KCB customers who have never been to branches (mobile is all that matters for them).

Numbers from KCB’s last Investor briefing (Q3 2016) show that 73% of KCB transactions were done outside branches (up from 62% a year earlier). Also, 75% of customers use mobile phone banking services and 91% of loans transactions are processed this way – and they averaged 80,000 loans per day after adjusting bank loan terms in line with the banking amendment law late in 2016.

So KCB group is planning an MVNO with Orange Helios Kenya ?? ?

Rumours are that the bank’s strategy would be akin to Equity Banks’ 3.0 strategy. This would enable KCB to manage customer accounts, cash, loans, insurance, as they send money or buy airtime, and sell them other products at a lower cost than agents and branches, while also integrating better with their customer lifestyles.

Writing in the Business Daily on the financial technology revolution that’s coming to East Africa, Oigara cautioned that, currently, a lot of the innovation in finance is happening outside traditional banking and finance institutions and beyond the sphere of regulators to manage risk in banking.

KCB will be having more fintech forums in the coming months.

Despite new mobile, ATM, and internet channels, customers still need to come into bank halls quite a bit, as seen by the queues at the beginning and end of each month. A lot of this is because customers need to bring and remit payments that end up going to other banks either via direct deposit, cheques, or RTGS. Does the money need to physically move? No, but the customers do, going from building to building to do single transactions at many banks.

It helps if you have a building like Sarit centre which is an attractive banking destination because it has many bank branches under one roof, with much more in adjacent buildings.

New malls (the Hub, (remodeled) Westgate put bank branches upstairs and  have one corner where they put all the ATM’s. Presumably, banks are nice tenants at malls as they pay for space over many years and the branches bring in a lot of foot traffic to other shops. 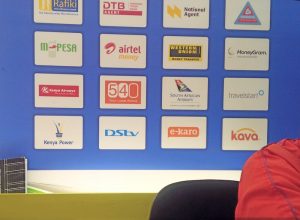 But for banks, there is a lot of redundancy. Every bank that has a branch network incurs a repeat of the same costs of staff, security, cash handling & transit, advertising signs, stationery, surveillance & alarms, insurance, etc. They also have building leases, insurance, and fees per branch or outlet – such as Kshs 65,000 (~ $650) per year for an ATM license in Nairobi County.

Big banks have invested in big branch networks, but can smaller banks share halls in new neighborhoods or towns like Eastleigh and Kiserian that experienced rapid growth, and where the banks have to catch up? Shall we see a bank hall or post office hall in such a place with 20 desks and 20 sets of staff for 20 different banks? Can banks share a hall like a Huduma centre which houses several different government departments in one hall who each second some staff there to serve their customers in such a centre? Agents like Zeepo do it and there are shared branch halls in the US for cooperative societies.

It is certainly possible. They already share ATM’s (through Kenswitch), payments switches, card networks (Visa, MasterCard) – so why not building space? his way they can share the cost of security, which can be handled by armed guards outside, and leave a friendly customer-facing interface inside that is devoid of bullet-proof glass (like some Uganda bank halls)

What other stories merit ranking?