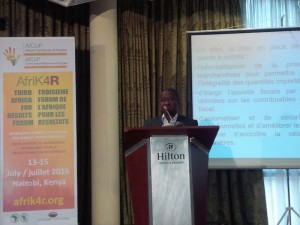 This is the theme of the third Africa for Results Forum (AfriK4R) forum that’s taking place in Nairobi from July 13 to 15, and organized by the African Capacity Building Foundation (ACBF) and the African Development Bank (AfDB).

The first one was held in  2013 in Harare, and the next  in 2015 in Abidjan. One of the main concerns has been that, with the diminishing official development assistance (ODA)  to Africa, estimated to be 27% in 2014, and down from 38% in 2004., the budget needs of African governments need to be matched by a growth in local resources like taxes, exports and natural resources.

Kenya’s Devolution CS Mwangi Kiunjuri cited some of the resources available to Africa including $520 billion annually from domestic taxes that Africa generates, $168 billion from minerals & fuels,  $400 billion that Africa holds in international reserves, rise in Stock market Capitalization from $200 billion in 1996 to $1.2 trillion in 2007 and $160 billion in sovereign wealth funds (10 African countries have established these)

Munthali, also cited good examples of domestic resource mobilization including the  Central Bank of West African States (BCEAO) reform on e-money; the Uganda border-post anti-smuggling trade measures; the Zambian direct deposit of fees into one government account; Zimbabwe’s tapping on the informal sector by introduction of presumptive tax; and Malawi’s use of Electronic Fiscal Devices in VAT collection.