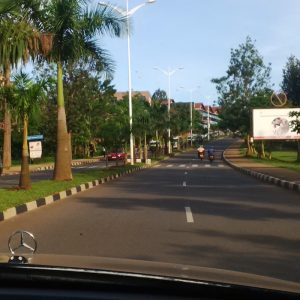 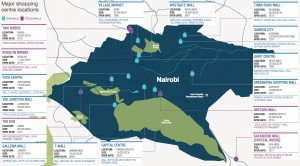 Knight Frank notes that, aside from Actis (the pioneering UK investor), most of the developers and landlords of Nairobi’s shopping centres are local Kenyan property owners.

A second Buffalo Mall is to be built in Eldoret. This comes after the Pivotal Fund acquired 50% of Buffalo Mall Naivasha.

Carrefour: This week opened their first store in East Africa. a 60,000 square foot hypermarket at the Hub in Karen, one of 57 stores that have opened there. Carrefour will be the anchor tenant and are run under the franchise of Majid Al Futtaim Retail of Dubai.   EdIt – Carrefour Kenya have an app for shoppers

(The) Game operated by Massmart. in which Walmart has a majority stake, opened at Garden City Mall as the anchor tenant.

Khetia:  are in the midst of a Kshs 1  billion expansion in western Kenya. They plan to open up stores in Kisii, Busia and Kericho, each of which requires Kshs  200 million.

Naivas The ownership of widely admired chain is subject to an inheritance court case.

Society Stores: An offshoot of a Khetia family member  – Trushar Khetia, hopes to grow the store brand. He says that they had the first chance to buy out Ukwala, but it wasn’t backed by the board and the deal fell through.

Two Rivers backed by Centum and built by Avic will also house a Carrefour store at the 62,000 square meter site in Ruaka that sits on 100 acres.

Tuskys: is focusing this year on staff welfare and streamlining customer service delivery through the deployment of  digital platforms for e-commerce. Shareholders are also trying to settle issues in readiness for a listing at the NSE by 2018.

Uchumi:  Is under new management and, once again, in search of a restructuring deal that involves working with suppliers, sale of assets (such as Ngong Road and Langata branches) and a share sale to a new anchor investor for about Kshs 5 billion. This has been complicated by some suppliers who sued to wind up the company, but talks are ongoing with the government, and it  appears that majority of the  suppliers will agree to convert Kshs 1.8 billion of the debt owed to them into equity at Uchumi.

Ukwala was bought by Choppies of South Africa. The deal was completed after a tax agreement deal  was reached with the Kenya Revenue Authority who were demanding back taxes from Ukwala. Ukwala had admitted to owing the taxman Kshs 101 million but appealed the additional Kshs 845 million that KRA was demanding.

Finally, suppliers,  have complained about delayed payments by supermarkets retail chains. This was highlighted in a letter from the Kenya Association of Manufacturers (KAM) to Tuskys, Nakumatt and Naivas.

The StableBarclays ↑
Bralirwa (Rwanda) ↑
Diamond Trust Bank ↓
East African Breweries (EABL) ↑
Equity Bank ↔
Kenya Airways ↓
Kenya Commercial Bank (KCB) ↑
Kenya Oil Company (Kenol) ↑
Safaricom ↑
Scangroup ↑
Stanbic (Uganda) ↓
Review
The portfolio, excluding new shares, is up 11% since May 2012 while the Nairobi Shares Exchange main index is up 6% over the same period.
At the entrance of the Ngong Racecourse is a set of office blocks that blend with the trees and grass of the racecourse comprise the Nairobi Business Park. It is part of the $300 million portfolio of Actis. 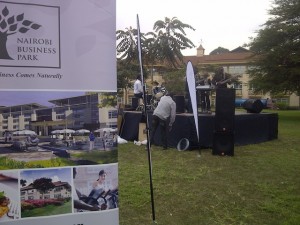 The first phase of the park was completed in 2004 and  has attracted ‘blue chip’ tenants including DHL, Finlay, Nokia, BAT, and Coulson & Harney advocates. The next second will be 15,000 sq. metres of buildings to house cafes, restaurants, banks fitness centers, shops and is budgeted to cost $22 million.
The investors aim for the Park, which overlooks the race track , golf course and forest complex to comprise green buildings that meet US green building council standards through measures like water recycling, rain water harvesting, solar lighting , and even eliminating air conditioning. Also to keep the green look, the Park which has one of the most generous parking rations per occupant, will have parking spaces underground.
The Park is expected to benefit from the future expansion of Ngong road to dual carriage way and completion of a bypass road that is about 2KM away (by Lenana School) – and when all the road are done, a drive to Jomo Kenyatta airport could take 30 minutes, and Westlands, 10 minute drive.
Actis , which developed both phases of the Junction mall and recently acquired 32 acres from East Africa Breweries on Thika Road to develop Garden City, with the largest mall in East Africa, also own a majority stake in the Mentor Management that develops, sells and manages properties from concept through to investor exit.  Other partners in the Park are the Association for the Physically Disabled of Kenya and the Jockey Club of Kenya.
Separately,  an article in the Star last week about the lure of office space in the suburbs, noted that the current cost of construction for high-end office buildings in Nairobi is about Sh60,000 (~$705) per square metre and that developers could yield a 100% return on sale or rent.
Tweets by bankelele