Next week at Abidjan, Cote d’Ivoire sees the return of the African Investment Forum (AIF) that is supported by the African Development Bank Group (AfDB).

This years’ summit, from December 1 to 3, will be a hybrid mix of physical and virtual sessions and is expected to feature the Presidents of Rwanda, Benin, Mozambique and Togo alongside other continental and international business leaders.

The 2020 annual meetings of the AfDB set out a focus for mobilizing financing towards infrastructure, regional trade and health care and those have carried on into the 2021 AIF whose theme is “Accelerating Transformative Investments in Africa.” It targets five priority investment sectors of agriculture & agro-processing, energy & climate change, health, ICT & Telecoms and industrialization & trade.

At the inaugural AIF in 2018 in South Africa, deals in demand were energy investments for Southern Africa, while East, Central, North and West Africa all had infrastructure top their deal discussions. Eventually, the forum secured $38 billion of investments for 49 projects across the continent.

At the next AIF in 2019, 2,200 participants from 101 countries discussed 57 deals worth $67 billion and eventually, investments were secured for 52 deals worth $40 billion. The 2019 forum also saw 16 SME’s and startups get to pitch in different boardrooms, now a staple of the AIF, alongside industry giants raising millions of dollars for larger projects.

There was no AIF last year, because of Covid-19, and the spotlight that should have been on deals to accelerate African Continental Free Trade Agreement (AfCFTA), has now taken on an added element of helping country economies rebound from Covid-19. The African Development Bank has provided support to different countries through a COVID-19 Rapid Response Facility. Also at the 2021 bank annual meetings, AfDB President Akinwumi Adesina announced that the G7 heads of state had heeded a call that $100 billion of the special drawing rights (SDRs) being issued by the IMF, be provided to support African countries as they tackle debt challenges while responding to Covid-19.

This year priority deals are being discussed that revolve around recovering from Covid-19 and include hospital projects in Angola, Cameroon and Nigeria. Another is to secure $45 million for a vaccine production facility in Eastern Africa that will manufacture three vaccines for the WHO, including one for Covid-19. There are also cotton industry projects for Burkina Faso and Mozambique as Covid-19 showed the need for self-sufficiency and a need to promote local manufacturing capabilities.

Highlights of the 2018 AIF: Afreximbank bank launched a project preparation facility, Mara launched an Android phone, there was an African creative industry showcase and social boardroom sessions for deals in Ghana and Zambia.

Highlights of the 2019 AIF: There were 6 concurrent boardroom sessions, a $600 million investment for the Ghana Cocoa Board, a financing deal for a road-rail bridge over the Congo River to link Kinshasa and Brazzaville, a forum on unclogging digital investments, and the launch of the (4th) Visa Openness Index report. It also featured sessions on opening the bank vault for women entrepreneurs, agro-processing industrial zones, climate change, an infrastructure financing trends report was launched, and a Lusophone compact for Portuguese-speaking African countries that reviewed six investment deals worth $702 million.

2021 AIF Format: Because of Covid-19 restrictions, the AIF will have 250 physical participants in Abidjan while over 2,000 others will connect virtually to participate in the boardrooms, virtual marketplaces, and virtual B2B meetings with investors and sponsors. In addition to the plenary sessions, there will be other parallel invite-only sessions that will feature heads of state, policymakers and industry leaders, some of which will be aligned for American and Asian timezones.

Anyone interested can register here for this year’s event, while companies and individuals are encouraged to join the AIF platform. There they will access financial and investment opportunities as they network with communities of other professionals.

EDIT: November 29. The Africa Investment Forum event was postponed at the last minute after a new Covid-19 variant made it difficult for delegations to travel to Abidjan and the organizers made a decision to put prioritize the health of participants. AIF teams will continue to have discussions with partners towards investment decisions until they can reconvene at a later date.

The three day-virtual boardrooms of the Africa Investment Forum resulted in $32.8 billion of commitments to invest in bankable projects. These include:

In just over a week, the African Development Bank Group (AfDB) will stage its 2020 annual meetings from Abidjan, Cote d’Ivoire which is the headquarters city of the bank.

The 55th annual meeting of the Group will run from August 25 to August 27. They had initially been planned to happen in May 2020. But because of the surge of coronavirus infections and travel bans across the continent, they were postponed.

The 2019 annual meetings were held in Malabo, Equatorial Guinea and saw thousands of guests, including Presidents, bank governors, finance ministers, and representatives of civil society, media, policy, and the private sector descend on the island of Bioko for a week of engagements.

But this year, as with all major global events, delegates will instead meet virtually and online. The 2020 meetings will feature a reduced schedule that will focus on closed statutory meetings of the Governors of the Bank who represent 54 African countries and 27-non-regional members of the Group.

A key agenda item will be the election of the President of the AfDB. Nigeria’s Akinwumi Adesina has served one term as President and is up for re-election. He is the only candidate, so far, and has the support of many countries including host Cote d’Ivoire and his native country. Last month he was vindicated by the findings of both a board investigation and an independent panel of international experts that investigated allegations in a whistleblower complaint.

There will also be the annual meeting of the African Development Fund,  and some familiar sideline events, such as the African Banker awards. 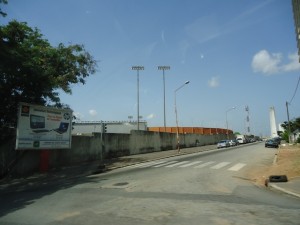 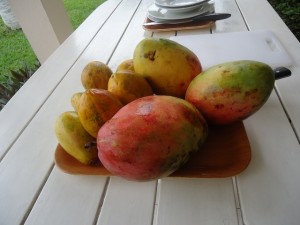 Food: is in plenty and with lot’s of variety. They include alocco (fried plantain), ocean fish (poisson), chicken, cassava, couscous, guinea fowl, mongoose and other more exotic foods like animal skin and leather. Most meals are accompanied a couple of starches and legumes, while fruits like mango’s are huge. Meals cost about 5000 CFA while a breakfast of black tea and a croissant is about1000CFA. There are also some familiar restaurant sights like Steers for those not too adventurous.
Shopping & Sight-Seeing:  There are lot’s of skyscrapers in the town, but a sight to see is the St. Paul Cathedral in Abidjan. However this is not to be confused with the world famous Basilica that is located in Yamoussoukro, 200 kilometers away.
What to buy: wood carvings, clothing items
Surprises:
Tweets by bankelele