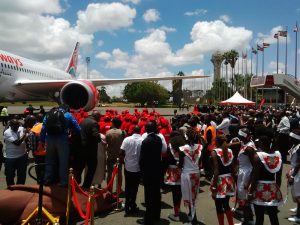 On Thursday, Kenya government officials, led by the Cabinet Secretary for Transport announced that Kenya has been granted Category 1 Status by Federal Aviation Administration(FAA) of the USA. This followed extensive renovation work at the JKIA airport in Nairobi and other aviation improvements. The elevation by one US aviation authority is a welcome step, but it is part of a process towards getting to direct flights, and there will still be more security checks, permissions, and deals to be done with airlines and airports before this comes to fruition.

The last direct flight attempt in June 2009 was halted by the US Department of Homeland Security. The Kenyan Transport minister had even traveled to the US to be on an inaugural flight only for it to be canceled at the last-minute. Delta had planned four flights a week to Nairobi, with a stop in Dakar, Senegal.

The announcement could be a boost for Kenya Airways (KQ), but the initial focus which they have maintained over the years when asked about the US,  is to pursue a code-share partnership, perhaps with Delta Airlines. Under the ongoing KQ restructuring project Operation Pride at the airline, code-shares which involve selling their tickets on partner airlines gets them revenue without having to deploy aircraft.

But once partner flights start, national prestige will force KQ to step in and do the flights themselves. They have the equipment, Boeing 787’s ‘Dreamliners’ that are perfect for direct US flights. The first Dreamliner for Kenya Airways, April 2014, flew from the Boeing factory on the West coast of the US on a non-stop a 16-hour flight to Nairobi, and expectations are to have much shorter flights from the eastern coast of the US, likely to be Washington DC or New York. After all, rival Ethiopian Airlines flies to five North American destinations, and there are ample numbers of Kenyans and US tourists and cargo in both directions to justify KQ flights. Perhaps once KQ gets back the Boeing 777-300’s leased out to Turkish Air.

The last direct flights to the US were on defunct Pan Am, which TV anchor Jeff Koinange who briefly worked as a flight steward on Pan Am and he describes the flights in his autobiography “Through My African Eyes”. That flight appears to have been New York-Dakar-Monrovia-Lagos-Nairobi with a Boeing 747.

Pan Am flights to Africa were rather interesting, as this excerpt from “Life Is an Excellent Adventure: An Irreverent Personal Odyssey”, by  Jerry Funk, shows.

EDIT: In its application documents, Kenya Airways estimated that approximately 60,000 passengers will be transported within the first year of non-stop service.

Sept 8 EDIT: On September 5, 2017, The US of Department of Transportation awarded Kenya Airways PLC with a foreign air carrier permit to engage in: Scheduled and charter foreign air transportation of persons, property, and mail from any point or points behind Kenya, via any point or points in Kenya and any intermediate points, to any points or points in the United States and beyond. and The holder shall also be authorized to engage in other charter trips in foreign air transportation, subject to the terms, conditions, and limitations of the Department’s regulations governing charters.

What is Operation Pride? Kenya Airways (KQ) has just released its financial results for 2016. It’s been another loss-making year, and it’s clear that major changes will have to be made. Internally at KQ, they have Operation Pride, launched in October last year but, which started in March this year, and which KQ CEO,  Mbuvi Ngunze,  said aims to:

Item 3 is really about the shareholders (which includes the Government of Kenya – as a shareholder and regulator, and KLM) making balance sheet, debt and equity decisions. KQ has already secured $200 million through an on-lending agreement with the Kenya Government, and got the first $100 million in September 2015, and the rest of it this month – in July 2016.

And while the move to layoff some pilots and other staff (once other discussions with the Court and the unions are resolved), Operation Pride is not about jobs. It also more than cutting on costs without compromising quality and waste without reducing service.

Operation Pride started out as 460 initiatives that mainly came from suggestions from staff, consultants and stakeholders to improve the business.  KQ staff will champion these as they are implemented over the next 18 months, and expected to generate about $200 million. About 40% of the impact will be from cutting costs and about 60% will be from growing revenue at the airline.

After the 2016 results announcement this week, the Kenya Airways team showed their guests some examples of the 134 ongoing processes that they have started on. Most are intended to generate recurring savings, but some of them are one-time initiatives have already borne fruit, according to management, including:

On the Revenue side:

On the Expense side:

KQ Managing Director, Titus Naikuni, said their aircraft were 3-4 years behind schedule and thanked the airline staff, passengers and salespeople for putting up with older aircraft in the interim. He added that plans are still on course for KQ to get more Dreamliner planes every month between June till October 2014. KQ Chairman, Evanson Mwaniki who was onboard the 16-hour non-stop flight from Paine Field, Washington to Nairobi, said they been assured at the highest levels of Boeing that the 787 program’s teething problems had all been sorted. He said each Dreamliner with engines cost the airline Kshs. 11 billion (~$130 million seems low), while the new Boeing 777-300’s arriving were Kshs 18 billion ($211 million) and yet they are competing for routes with Gulf nation carriers with seemingly unlimited pockets who could order 100 aircraft while KQ ordered 9.  He made three requests of the Government; to expedite bilateral air service agreements, sort out double taxation that penalizes the airline and also expedite VAT refunds.

Transport Cabinet Secretary, Engineer Kamau said the government of Kenya and KQ had worked on new terminals (Greenfield started, Terminal 4 ready in July), and new aircraft (777, 787) and invited the President to use Kenya Airways for trips and for KQ to use the President who travels a lot and get themselves on his agenda for such trips.

Also at the launch was the President of Somalia, Hassan Sheikh Mohamoud, who said terrorism was a global challenge and that, while Shabaab was associated with Somalia where it gained a foothold in the then-lawless state, it is now losing ground in terms of financing, recruitment, and training. He thanked Kenyans for their tolerance and accommodation of business people and said Somalia was on track for a first election in 45 years in 2016 in which women would also vote.

President Kenyatta said KQ had more of a global reach than Kenya embassies so was in essence first ambassadors for the country and that in his personal experience it had the best pilots and crew in the world. Later he noted that pilot costs are heavy, and that KQ’s labour is less productive than Ethiopian Airlines and that it was necessary for the airline to simplify operations and get better staff productivity.  He also said that Angola had agreed to open an embassy in Nairobi  – a relief to many as Kenyans applying for visas have to do so via Dar es Salaam, Tanzania.

The new aircraft is part of Project Mawingu, the airline’s massive fleet, and route expansion program. It will start on the Paris route in June and in between will be used for familiarization of staff, training, and be showcased to key KQ markets.  At the launch, a General Electric representative thanked the airline for having over 100 of their engines in the fleet, while a Boeing VP said KQ had designed and selected one of the best Dreamliner interiors on offer.